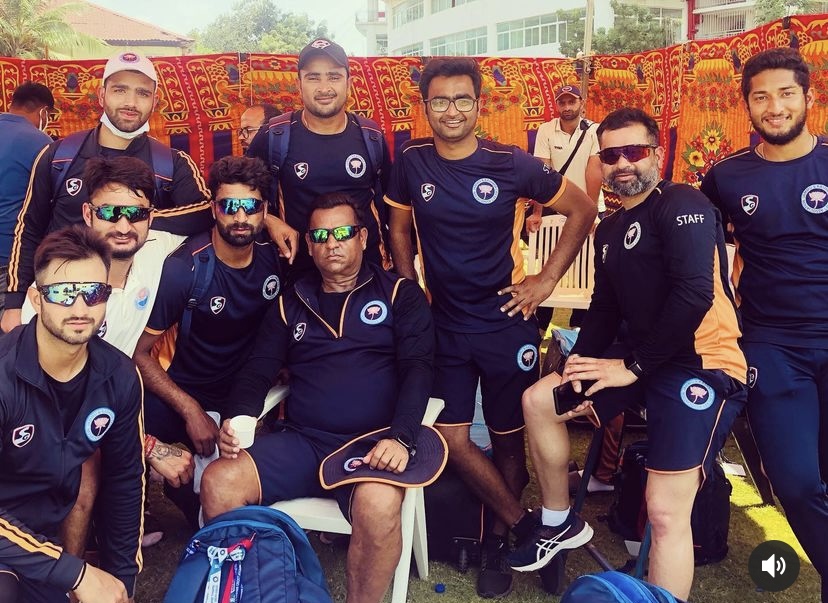 Srinagar, March 6: J&K were knocked out of Ranji Trophy tournament after suffering nine wicket defeat against Railways in its last group match at IIT Chemplast Chennai on Sunday.

J&K in second inning got all out for 203 runs , thus setting a target of 36 runs to win for Railways. For J&K overnight unbeaten batsman Ian Dev got out without adding anything to total. Umar Nazir played a unbeaten cameo of 30 runs from 23 balls to set target for Railways.

In reply Railways achieved target for the loss of one wicket 12.1 overs. Vivek Singh was only wicket to fall in their inning scoring 16. Shivam Chowdhary scored 18. For J&K Parvez Rasool took the only wicket that fell during the inning.
With this defeat J&K were knocked out of the tournament after suffering two defeats out of three.

Earlier on Saturday, resuming from an overnight score of 297/8, the unbeaten tailenders- Yuvraj and Akash Pandey played sensibly and mixed aggression with defence to guide their side to a healthy total of 426 runs, thus gaining a decisive lead of 167 runs, making a partnership of 132 runs for the 9th wicket. Yuvraj was more agressive and scored a magnificent century (103) off 133 balls, studded with 10 fours and 3 sixes, while Akash Pandey contributed 43 runs off 127 balls with 6 fours. Earlier, opener Pratham Singh and middle-order batsman Shivam Chaudhary had scored 75 and 47 runs respectively.

J&K bowlers showed dismal performance on Saturday as the duo of Railways tailenders Yuvraj and Akash frustrated them and J&K bowlers had to struggle for around three and a half hours to get rid of them. Almost all the bowlers bowled poorly today and failed to hit good areas. Abid Mushtaq was the pick of the bowlers, but he could not add to his overnight tally of 5 wickets, conceding 95 runs in his 31 overs, while Aquib Nabi claimed 2 wickets. Parvez Rasool and Umar Nazir shared one wicket each.
After conceding a huge first innings lead of 167 runs, J&K were struggling in the second essay at 145/6, still trailing by 22 runs. Skipper Ian Dev Singh Chauhan was unbeaten on sedate 22 runs off 76 balls, with 2 boundaries, while Auqib Nabi was at the crease on one at the draw of stumps today. Opener Suryansh Raina was the top scorer with 39 runs off 84 balls, studded with 4 fours and one six, while wicketkeeper Fazil Rashid and promising Abdul Samad contributed 29 runs each. Qamran Iqbal also chipped in with 15 runs off 19 balls with 3 boundaries.
For Railways, Shivam Chaudhary was the pick of the bowlers, who took 3 important wickets by conceding 27 runs in his 7 overs, while Karn Sharma bagged 2 wickets by giving away 38 runs in 15 overs. R Sharma also claimed one wicket.