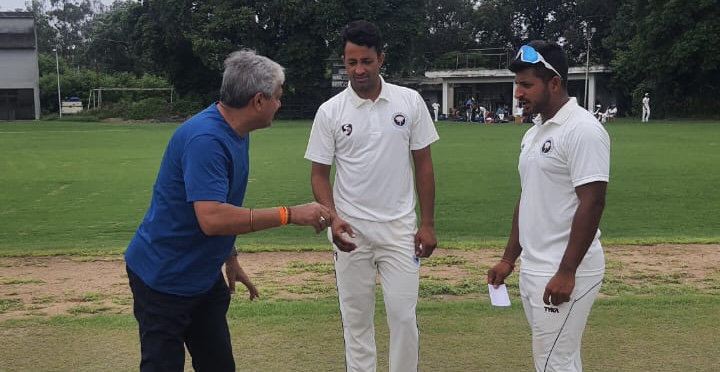 Jammu: Inclement weather conditions and heavy rain played spoilsport as only 28.3 overs of play could take place at Jammu University ground and no play at all was possible at Country Cricket Stadium Gharota in the ongoing JKCA Senior Men’s Multi-Day Tournament at Jammu.

Earlier, resuming from an overnight score of 181/5 in 71 overs, JKCA A2 added another 36 runs today to make it 217/6 in 79 overs. Kanhaiya Wadhawan remained unbeaten on brilliant 90 runs, while Govind Sharma contributed 73 runs to the total. For JKCA A1, Basharat and Abid Mushtaq took 2 wickets each, while Rohit Sharma claimed 1 wicket each.

In reply, JKCA A1 were 74/3 when the play was called off due to rain. Abhinav Puri was unbeaten on 26 runs, while skipper Shubham Khajuria also contributed 26 runs to the total. Gokul chipped in with 14 runs. For JKCA A2, Ritik Singh was the pick of the bowlers, who took 2 wickets while Brijesh claimed one.

At Country Cricket Stadium Gharota, no play was possible today and JKCA A4 was declared winner by virtue of first innings lead.

Earlier on day-1, put into bat, JKCA A4 had bundled out for a modest total of 139 runs in 36.1 overs in their first innings. Dhruv Parmar top scored with unbeaten 42 runs, while skipper Shubham Pundir and Sushant Shandal contributed 26 and 23 runs to the total respectively.

For JKCA A4, medium pacers Akash Choudhary and Nitish Salaria took 3 wickets each, while Sampark Gupta and Kunal Singh claimed 2 wickets each.
JKCA A3, in reply collapsed at a meagre total of 100 runs, thus conceding a vital lead of 39 runs to JKCA A4.

Skipper Henan Malik was the only batsman to show some resistance, scoring valuable 44 runs, while no other batsman could show application. For JKCA A3, Vanshaj Sharma was the wrecker-in-chief who took 5 important wickets by conceding 28 runs in 12.1 overs, while Sahil Lotra and Sushant Shandal bagged 2 wickets each.

JKCA A4 were 39/1 in their second essay at the draw of stumps on day-1 today. Explosive Arya Thakur was unbeaten on 28 runs. JKCA A4 earned 3 points while A3 bagged one point.

The matches were officiated by Vikram Dogra, Deepak Gupta, Dayal Singh and Vikas Bali as Umpires, while Ashok Singh and Sabastian Frank were the scorers.