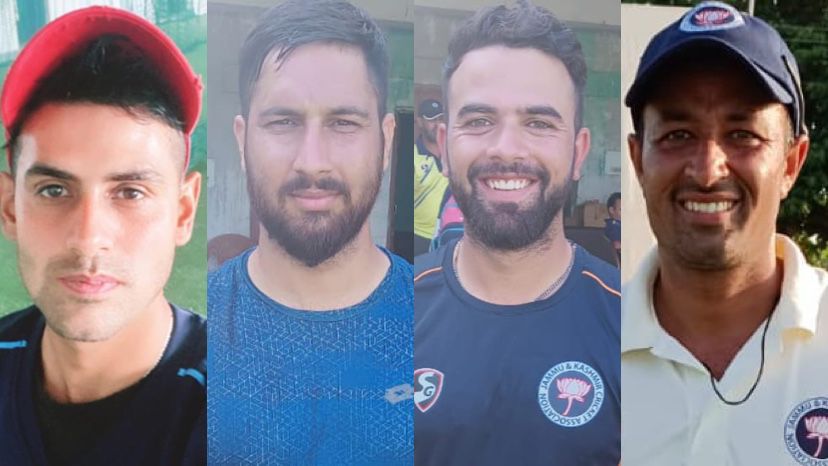 At Jammu University ground, the match between A1 and A3 ended in a draw. Earlier, resuming from an overnight score of 233/2, JKCA A1 scored 408/8 in 75 overs. Opening batsman Abhinav Puri, who was unbeaten on 93 runs notched up a magnificent century and scored 161 with elegance and sublimity, while Rohan Koul who was unbeaten on 36 runs, scored a power-packed century (116).

Skipper Shubham Khajuria had contributed 87 runs yesterday. For JKCA A3, leg-spinner Abhay Tandon took 4 wickets, while Kawalpreet and Sampark claimed one wicket each.

In reply, JKCA A3 scored 174/9 in 45.5 overs. Skipper Henan Malik top scored with 63 runs, while Aditya Partap contributed 39 runs. For JKCA A1, Abid Mushtaq was the wrecker-in-chief, who took 6 important wickets by conceding 46 runs, while Basharat and Nityam claimed one wicket each.

At Country Cricket Stadium Gharota, JKCA A2 got the better of JKCA A5 by virtue of first innings lead.
In reply to JKCA A2’s total of 179 runs, JKCA A5 bundled out for paltry 76 runs in their first thus conceding a lead of 103 runs to A2. Shivansh Sharma contributed 42 runs, while Yogesh Sikka made 13 runs.

For JKCA A2, Ramdayal was the pick of the bowlers, who took 5 wickets by conceding 19 runs in his 9 overs, while Ritik Singh claimed one wicket.
In second essay, JKCA A2 scored 115/9 in 29.2 overs. Abhishant Bakshi (37) and Suryansh Raina (25) were the main contributors. Spinners Sunil Kumar took 4 wickets, while Marutwan bagged 3 wickets.

Ramdayal was the pick of the bowlers for A2, who took 4 wickets by conceding 12 runs in his 7 overs, while Sunil claimed 2 wickets.