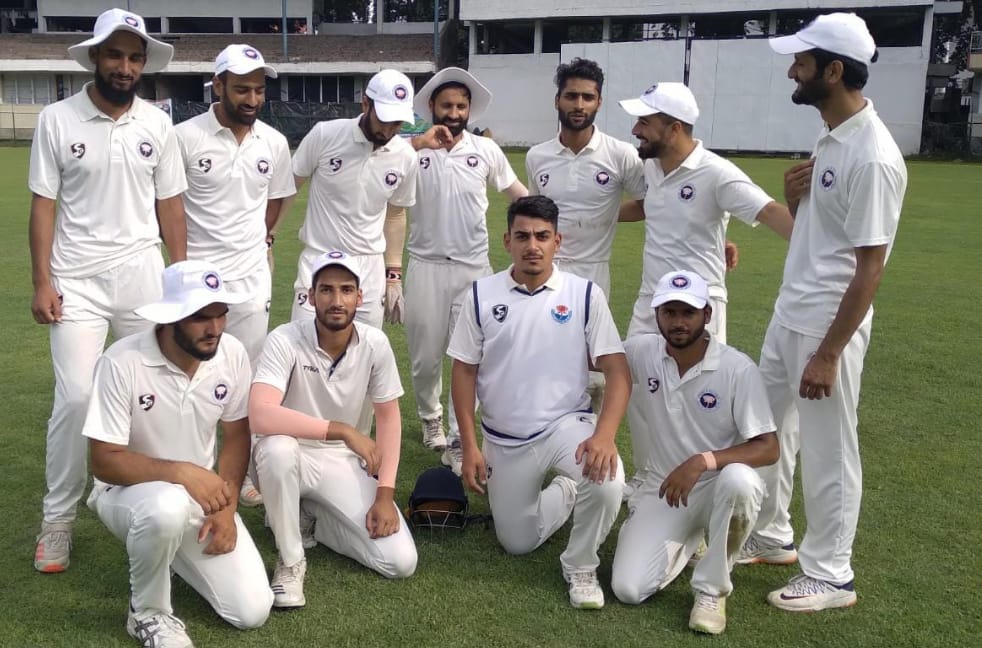 Jameel Nazir, Nadeem Dar and Yawar Hassan scored big half-centuries to guide their sides to victories by virtue of first innings leads, while Parvez Rasool’s brilliance (5 wicket haul and 48*) went in vain as it was not enough to stop their rivals from emerging victorious in the ongoing JKCA’s Senior Men’s Multi-Day Tournament at SK Stadium, Srinagar on Saturday.

At SK Stadium Srinagar Ground-A, JKCA B4 got the better of JKCA B5 by virtue of first innings lead. Earlier, resuming from an overnight score of 46/2, JKCA B4 managed to score 225 runs in 65.3 overs thus gaining a vital first innings lead of 115 runs over JKCA B5. Nadeem Dar top scored with 93 runs while Abid Padder and Mujeeb ul Haq contributed 36 and 34 runs to the total respectively.

For JKCA B5, skipper Parvez Rasool was the wrecker-in-chief, who captured 5 wickets by conceding 19 runs in his 13 overs, while Mujtaba Rizvi bagged 3 wickets and Younis Manzoor claimed one.

JKCA B5 were 162/5 in their second innings at the draw of stumps on the final day today. Parvez Rasool was unbeaten on 48 runs while Tabish Nisar scored 30 runs. Shahrukh Dar was the pick of the bowlers from JKCA B4 who took 3 wickets by conceding 25 runs in his 15 overs, while Umer Nabi claimed one wicket.

Meanwhile, at SK Stadium Ground-B, JKCA B1 prevailed over B2 in an easy contest after the delayed start on day-2 today.

Put into bat, after the first day’s play was washed out, JKCA B1 set a target of 266 runs for B2. Jameel Nazir top scored with brilliant 96 runs, while Yawar Hassan contributed valuable 79 runs to the total. Ussaid also contributed 45 runs. For B2, Irfan ul Haq and skipper Waseem Raza took 2 wickets each.

JKCA B2 in reply bundled out for paltry 139 runs. Wahid Teli scored splendid fifty (50), while Waseem Raza and Sufiyan contributed 31 and 23 runs to the total respectively.

For JKCA B1, Yasir Bhat, Mujtaba Yousuf and Ussaid bagged 2 wickets each.