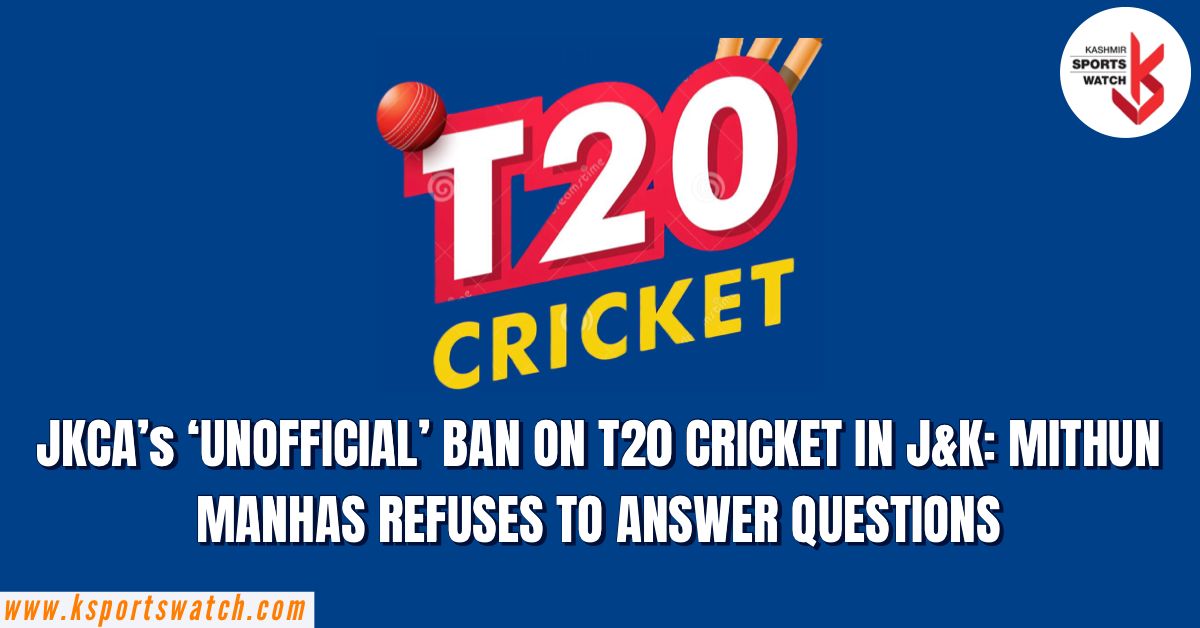 Srinagar: While cricket world is debating over the viability of 50-over format, the BCCI-run cricket governing body of J&K- the J&K Cricket Association (JKCA)- has put an ‘unofficial’ ban on the conduct of the T20 cricket in the Union Territory.

Though ban has not been put in place officially, the association run by committee appointed by BCCI is discouraging all the T20 event organisers from conducting such events. The committee has also banned some of its registered players, who took part in some T20 league events held in J&K and most particularly in Kashmir province.

JKCA some time back had issued notice to all its registered players taking part in its ongoing event from participating in any ‘unauthorised’ events. The notice affected more than 600 players who were part of JKCA tournament from Under-19 age group to senior level. In JKCA tournament a player at the most got to play 5 One Day format matches and three days matches and for rest of the time JKCA has asked them to stay idle.

It means the talented cricketers of J&K can’t still take part in any event being held without the approval of JKCA.

After the notice was issued many event organisers approached JKCA for the permission but were denied. Most of the organisers were asked to conduct 50-over format tournaments instead of T20 format. They were told that permission would be granted only for 50-over format and not T20.

Recently a top profile Kashmir-based cricketer was left out of Kashmir-XI side for the final against Jammu-XI side because the cricketer had played one T20 match in some part of Kashmir.

Meanwhile, everyone is questioning the logic and is terming the JKCA tactics as illogical. Many are also questioning the JKCA Sub-Committee member Mithun Manhas’s position in this regard as former cricketer himself was recently part of IPL— a T20 tournament— as a coach for champions Gujarat Titans.

When KSW reached out to Manhas and asked him how ethical it is on his part to put a ban on T20 in J&K while he himself remains a part of cash-rich T20 league, he said, “I will not reply this question, go write whatever you want to write, I don’t care,”.

While most of the event organisers in Kashmir went ahead with their events without the top cricketers some have been still pursuing with JKCA for the permission.

“Most of the events have been held or are going on. The prominent one being Bijbehara League which involves some outside J&K IPL players. However, almost all the top Kashmir cricketers have skipped these events while some who knew that they have got least chance of making it to J&K team have opted to play in these leagues,” said a league organiser.

“Some league organisers are still in contact with JKCA for the permission. Some have even now agreed upon to hold 50-over format event instead of T20 and may get permission,” an organiser said.

A former player questioned JKCA’s logic and its tactics.

“I don’t understand what they want to achieve by this. They cant ban T20 cricket hence have not issued official notice. However everyone is aware of the unofficial ban and players have been barred from playing in T20 events and those who have played got punishments as well,” said a former Ranji Trophy cricketer.

“A committee member himself earned Crores recently by being part of IPL and in J&K he is barring our cricketers from playing in local T20 events. J&K would be participating in BCCI’s Syed Mushtaq Ali T20 event or by JKCA’s logic we should skip that?,” he added.