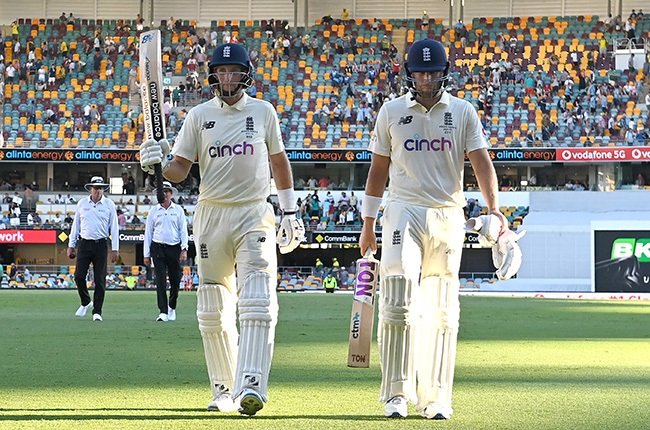 Root and Malan combined in a partnership of 159*, reducing the deficit to just 58 when stumps were drawn on the third day. They helped England finish at 220/2.

The England skipper remained unbeaten on 86 with Malan keeping him company on 80*.

Earlier Travis Head looked in a mood to back up his day two exploits, continuing his team’s charge with No.9 Mitchell Starc. The pair struck boundaries in the third over of the morning, signalling their intent.

The pair added 48 in the first 11 overs of the day, before Starc miscued a flick into the deep for a well-made 35. Nathan Lyon got into the act with two boundaries, but soon joined Starc in the pavilion when he top-edged another Mark Wood wicket.

Head brought up 150 from just 143 balls, though was dismissed not long after for 152 as Australia’s last wicket, in an all-out attack with the tail falling around him.

While Head may lament not adding more to his team’s score, he managed to compile a total of 82 runs in the morning’s play, pushing Australia’s lead to 278.

England survived the Australian early-innings bowling barrage before lunch, nudging to 23/0. Pat Cummins, after his five-wicket haul in the first innings, would break through straight after lunch – digging in short to Rory Burns, the England opener failed to move his bat out of the way of the delivery, edging to debutant Alex Carey.

Dawid Malan and Haseeb Hameed launched a mini counter-attack of sorts, with the pair enjoying a scoring rate of four-an-over at one point – the flow was eventually stemmed, albeit by a bit of English misfortune. Starc strangled Hameed down the leg-side, and Carey claimed his fifth dismissal of the match.

Root began with measure at No.4, scoring just four runs in his first 19 deliveries. It helped him settle down, and Root eventually broke the English record for most Test runs in a calendar year on the way to a 51st Test half-century, passing Michael Vaughan’s 1481 made in 2002.

Malan strolled to a half-century of his own and looked in relative control, eating away at the hosts’ lead, with Cummins turning to all-rounder Cameron Green. Green tried and failed, and Cummins would turn to many of his bowlers through the rest of the day in a bid to break the partnership, but to no avail. The England duo have given the visitors hope.

In injury news, David Warner was a notable absentee from Australia’s side in the field, nursing a rib injury sustained in his batting innings after being hit by Ben Stokes on day two.