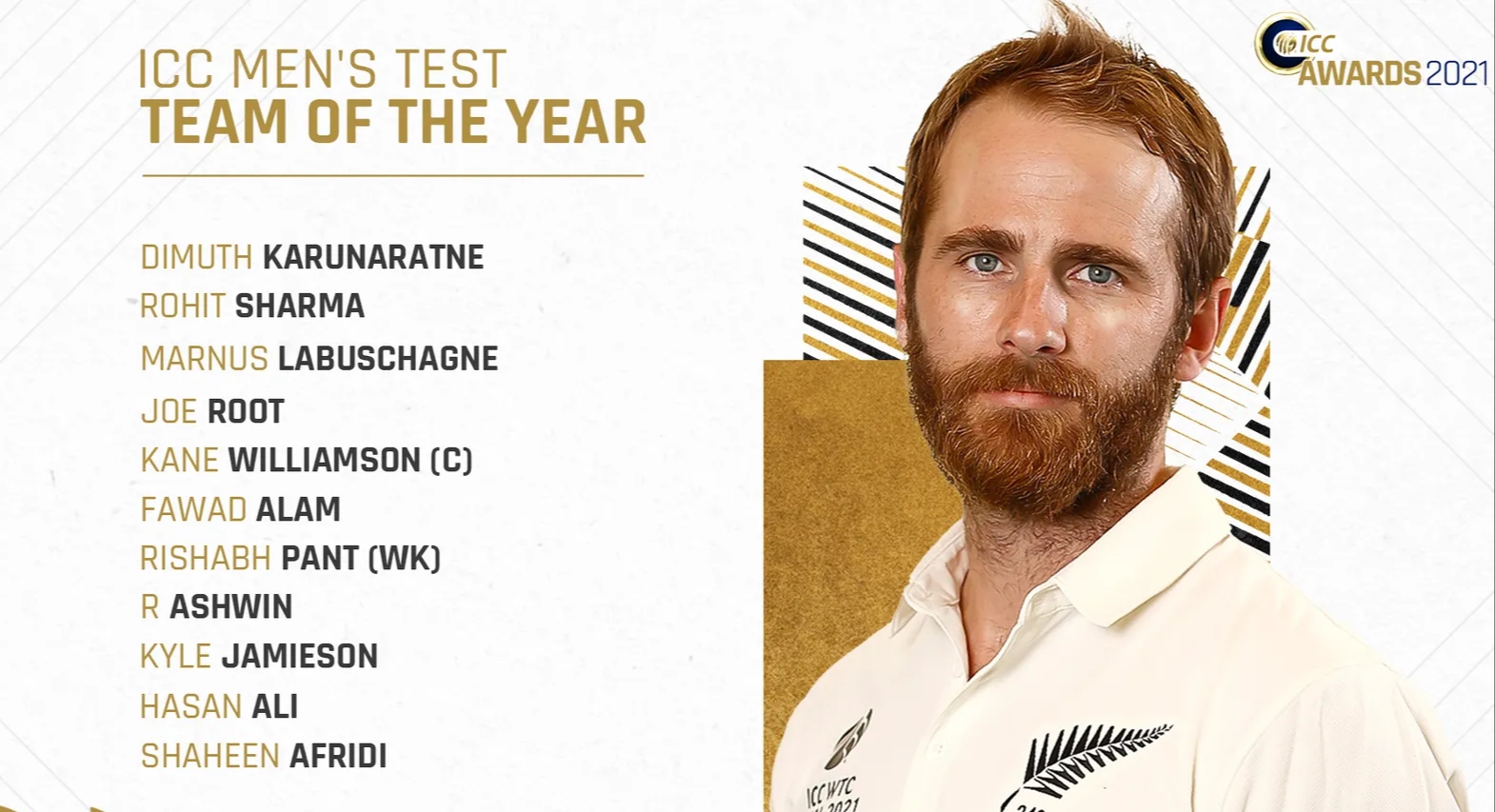 The team include three Indian, three Pakistani and two New Zealand cricketers. It also include one Australia, One English and Sri Lanka players.

Dimuth Karunaratne (Sri Lanka)
The Sri Lanka skipper is a deserved addition to the team, as he consistently got his team off to solid starts during the calendar year. He scored 902 runs in 7 matches at an average of 69.38 with four centuries. Some of his memorable innings included a double-century against Bangladesh in Pallekele and a gutsy ton against South Africa at Johannesburg. For his performances, he was nominated for the ICC Men’s Test Player of the Year award.

Rohit Sharma (India)
Rohit Sharma came into his own as an opener in the longest format of the game. He cracked 906 runs in the calendar year at an average of 47.68 with two centuries. Both of the centuries were memorable knocks in contrasting conditions against England – one at home in Chennai and the other in overcast conditions away from home at the Oval. With key assignments coming up, Sharma will have a key role to play for India in 2022.

Marnus Labuschagne (Australia)
2022 was a memorable year for Marnus Labuschagne as he continue to score runs in bulk while further cementing his position as Australia’s long-term No.3. His exploits also led him to ascend to the top of the charts of the MRF Tyres ICC Test Player Rankings for batting. In 5 matches, Labuschagne scored 526 runs at an average of 65.75 with two centuries.

Joe Root (England)
2021 belonged to England skipper Joe Root despite his team struggling for results in the longest form of the game. It was a year for the ages for Joe Root as he cracked 1708 runs in 15 matches at an average 61. He also six tons, all being memorable in nature and of the highest order. His 1708 runs are the third-most scored in a calendar year in the history of Test cricket.

Kane Williamson (c) (New Zealand)
Leading the 2021 ICC Test Team of the Year, Kane Williamson was an influential leader for New Zealand, leading them to glory at the inaugural World Test Championship Final against India in Southampton. He was also steady with the bat, scoring 395 runs in 4 matches at an average of 65.83 with one century.

Fawad Alam (Pakistan)
At the age of 36, Fawad Alam has finally established himself as a cornerstone of the Pakistan batting lineup in Test cricket after years of toling on the domestic circuit. He was at his sturdy best in 2021, scoring 571 runs in 9 matches at an average of 57.10 with three centuries. His tons came in tough situations against South Africa, Zimbabwe and West Indies.

Rishabh Pant (wk) (India)
Rishabh Pant further established himself as India’s first-choice wicketkeeper-batter in all the three formats, with his continuous development especially coming to the fore in the Test arena. He scored 748 runs in 12 matches at an average of 39.36 with one memorable ton against England at Ahmedabad. He also accounted for 39 dismissals in 23 innings, with his glovework continuing to improve.

Kyle Jamieson (New Zealand)
Jamieson emerged as a brilliant bowling option in 2021 for the Kiwis, perfectly complementing the trio of Tim Southee, Trent Boult and Neil Wagner. Extracting great pace and bounce off the surface, he picked up 27 wickets in 5 matches at an average of 17.51. He also scored 105 runs at 17.50 and was adjudged the Player of the Match in the ICC World Test Championship final against India in Southampton.

Hasan Ali (Pakistan)
Hasan Ali always delivered with the ball for Pakistan in 2021, be it as a strike bowler or when it came to holding one end up. By far his best year in the longest format, Ali scalped up 41 wickets in 9 matches at a sensational average of 16.07. He also picked up one five-wicket haul and registered best bowling figures in a match of 10/114. Forming a formidable duo with Shaheen Afridi, Pakistan will hope he carries on his form in 2022 with some tough assignments awaiting them.

Shaheen Afridi (Pakistan)
It was a year for remember for Shaheen Afridi, especially in the longest form of the game. Extracting brilliant movement with the new ball and reversing it with the old, Afridi picked up 47 wickets in 9 matches at an average of 17.06, including three five-wicket hauls. Still only 21, Shaheen will likely lead the Pakistan pace bowling unit for years to come and with already rapid improvements in his bowling, he will undoubtedly prove to be a fearsome prospect.