Abu Dhabi, June 19: Karachi Kings stayed on course to defend their HBL Pakistan Super League title when they defeated Quetta Gladiators by 14 runs to eliminate Lahore Qalandars in the penultimate match of the 2021 edition at the Sheikh Zayed Cricket Stadium on Saturday.

Danish Aziz stroke a hurricane 13-ball 45, including a record 33 runs off a seven-ball 19th over from Jack Wildermuth, which lifted Karachi Kings to 176 for seven after they were reeling at 136 for five in 18 overs.

Quetta Gladiators, who made five changes to their side for their final outing in what was a forgettable series for them, finished at 162 for seven in 20 overs.

Karachi Kings’ victory meant Lahore Qalandars failed to qualify for the play-offs for the fifth time in six attempts and will now take a return flight along with Quetta Gladiators. Kings eliminated Qalandars on net run-rate after both the sides finished their 10 matches with 10 points apiece.

While table-toppers Islamabad United already guaranteed to feature in the 21 June Qualifier irrespective of how their last match against Multan Sultans pans out, Sultans will need to avoid a big loss against United to ensure both the sides go head to head in the match that will commence at 1700 UAE time (1800 PKT time).

If Sultans beat United or avoid a big loss, then Peshawar Zalmi and Karachi Kings will go toe to toe in the first Eliminator on 21 June, which will get underway at 2200 UAE time (2300 PKT time). In the scenario of Sultans losing heavily in the 30th and final league match, United and Zalmi will play the Qualifier, while Sultans and Kings will meet in the first Eliminator.

Danish Aziz was the star of Karachi Kings’ victory that kept them alive in the tournament. Danish slapped two fours and five sixes in a 13-ball 45 that propelled them from a concerning 136 for five in 18 overs to a position of strength at 176 for seven in 20 overs.

Danish added 53 runs for the sixth wicket in 18 balls with Chadwick Walton, who returned unbeaten on a 27-ball 34 with two fours and two sixes.

After electing to bat first, Karachi had made a solid start in their must-win match by reaching 71-0 in nine overs, before they lost their way and stuttered to 136 for five in 18 overs. Sharjeel piloted Kings’ positive start by scoring a 34-ball 45 with three fours and four sixes, while Babar Azam contributed a 25-ball 23.

The story for Gladiators was the debut of left-arm spinner Arish Ali, who returned highly impressive figures of 4-0-28-4. His victims were big fishes Sharjeel, Martin Guptill (five), Najibullah Zadran (12) and Imad Wasim (three).

In their target chase, Quetta Gladiators were never in the hunt after none of their batsmen were able to convert good starts into big scores except Sarfaraz Ahmed, who top-scored with from 51 not out from 33 balls with eight fours. 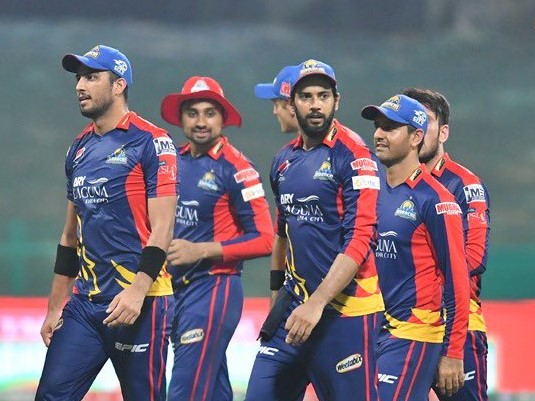