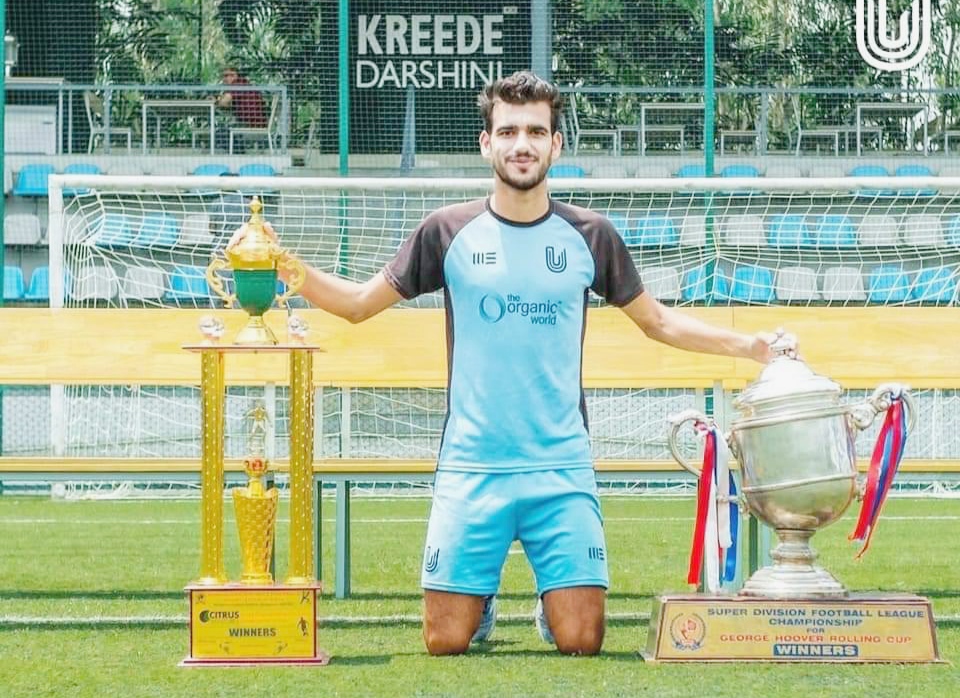 Srinagar , April 25: From the time Asrar Rehbar shifted his base from Kashmir to Bangalore for playing football , he had one aim, to see his side emerge out as champions. That is what happened this season as FC Benguluru United lifted the Bangalore Super Division title with Kashmir lad playing a crucial part in that.

Asrar started to play for FC Benguluru United in 2019 and has emerged as one of the main players for the side. In the league, Bengaluru played 12 matches and went on to win 10. They drew one and lost one. Asrar went on to score two goals and two assists.

“After joining the Sanat Nagar Club I gave trials for my school team in Burn Hall. It was just the beginning. Since then, I have played six nationals for the State at various levels. I started playing professional football with J&K Forest team and then LoneStar Kashmir FC. In 2016, I switched over to Real Kashmir and played with them in Durand Cup and also the I-League 2nd division,” Asrar was quoted as saying by Greater Kashmir.

About Bengaluru, Asrar said, “Our aim, since the beginning, was to finish as champions. We had a good pre-season camp in Bangalore. Everyone was confident in this team. Our coach Richard Hood and Gouramangi Singh, who is ex-Indian national team captain, had full faith in us. We started our season with a 8-1 win against Income Tax deptt during which I scored a goal and registered an assist in that game,” Asrar said. “As the season went along, we performed well.”

Recalling his memorable moment during the title winning campaign, Asrar said he came on as a substitute at the 90th minute against ASC with the score tied at 1-1.

“I was able to score the winner in the 94th minute. I could hear the crowd chanting my name and everyone around me was happy. That was one of the proudest moments for me,” Asrar told Greater Kashmir.

FC Bengaluru United won the title by bagging 31 points while the second-placed side Bengaluru FC Reserves had 30 points. “It was a close competition with Bengaluru FC Reserves pushing us all the way. They are the reserve side of the bigger and well known team than ours. To emerge winner in the league ahead of them is not a mean feat,” Rehbar said. Asrar said that as the primary goal is completed now, the team has shifted its focus on the I-League 2nd Division.

“Now we want to shift our whole focus on the I-League 2nd Division. We are hopeful of performing well in that and go on to qualify for the I-League,” he said.

Before joining FC Bengaluru United in 2019, Asrar was highly regarded in J&K football circles. He was part of the clubs that played in the I-League 2nd division and had also played in Spain as part of a training and development programme.

When asked what prompted him to shift base from Kashmir to Bangalore, he said it was Bengaluru United coach Richard Hood who offered him a contract for three years.

Asrar was among the players who were selected during the talent hunt for Spain and he did play for one of the sides in the European country.

“I was selected for Spain and there I played for Sporting Deportiva Lenense and went on to score a brace in my debut match. It was a great experience and helped me to develop as a footballer. After coming back, I resumed my work with Real Kashmir. During the same season, I was selected to play in the Santosh Trophy for the State,” he said.

“That was the best thing and a proud moment of my football career. Though I went to Spain and played for a top quality side who are far superior to the sides in our State, it was always a dream to get selected for the J & K team and represent it in the national football league,” he said. (With Inputs from Greater Kashmir)