Srinagar, April 14: Before going for actual target , Kashmir mountaineer Nawab Moazam Khan who is part of Indian Mountaineering Foundation (IMF) contingent on April 13, summited Mt. Lobuche in Nepal.
Nawab who has been selected by IMF for its
Everest massif expedition on April 13 climbed the 6119 metre high, Mt Lobuche along with rest of the members of the contingent.

Climbing Lobuche was part of acclimatization process before the final summit push in Everest Massif. Mt Lobuche falls enroute Everest Base Camp.
“It is part of the process and we scaled it successfully today. Before reaching Everest Base Camp it was part of plan to do this activity . Actual acclimatization process will begin at Everest Base Camp,” Nawab was quoted by daily Greater Kashmir .
Lobuche mountain lies close to the Khumbu Glacier. There are two main peaks, Lobuche East and Lobuche West. A permit to climb the mountain is required from the National Mountaineering Association (NMA) of Nepal.
Earlier on March 28 the first Indian Everest Massif Expedition 2021 was flagged off by Union Sports Minister Kiren Rijiju from Delhi .
Nawab is part of 12 member IMF Everest Massif Expedition 2021. During expedition team is scheduled to scale four peaks of Everest Massif, Mt Pumori, Mt Nuptse, Mt Lhotse and Mt Everest. Nawab is expected to part of team that would scale technically challenging Mt Nuptse 7861 metre, which has never been climbed by any indian contingent. 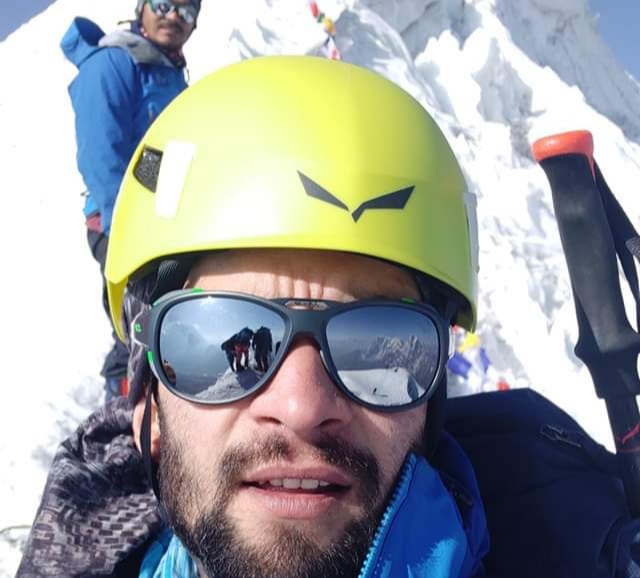