A man raising his bat in one hand and helmet in the other with a caption, “Star cricketer XYZ blistered 100 in 30 balls,”

How many such Facebook posts do you come across a day? A 100? Or more? I’m sure the number is higher than I or you think. It’s not that all of these are posted by players themselves, but there are countless pages named ‘sports this and that’ in Kashmir.

These pages upload pictures of players with a one or two-line caption, which mostly states the number of runs or wickets taken by that particular player alone. When, where, against which team, the match summary? All of this is left for a reader to find about on his own.

And the language and grammar used by the admins of these pages is well beyond my ability to understand. Surely, English is just another language but they call themselves ‘sports journalists’ now, so at least they need to make sure readers can understand the captions.

I am not trying to tell you that highlighting someone’s achievements on social media is wrong. It in no way is, but the thing that’s bothering me or maybe those who care about the sport is how players are blown away from this unwanted publicity. Cricketers now hit the ground with just one aim: to land on Facebook pages in the evening.

This is highly problematic. Because when you play with the intention of getting praised on social media, you stop concentrating on what actually needs to be done to make it big. The best example I have to prove my point is: you go and check out the squads of J&K’s state-level teams from last many years. From U-16 level to seniors, how many of these Facebook stars make it to the squad?

All they do is play T20 matches on mating wickets and later call these Facebook admins telling them about their performance. Can this help them? Of course not. In order to play at the higher level, you need to be technically sound. You need to have the right level of fitness, etc, etc.

However, the players aren’t to be blamed alone. Everyone wants to be in the spotlight. But even that needs to be channelized properly. In 2015, we started the Kashmir Sports Watch magazine and website with an aim to revolutionise sports reporting in J&K. We wanted to give local sports and sportspersons a platform because the mainstream media surely didn’t have enough space. While we continue to work on it, these Facebook pages are proving to be disastrous as sportspersons, cricketers in particular, get drawn away by the likes and shares.

Also Read: Why winning a medal is easier than making a meme in Kashmir

We too receive 100s of messages daily from players and organisers. But we have a proper structure in place. We just don’t go by what they send us. We ask for complete details; from who won the toss to how the match progressed. After collecting all the data, we write complete match reports and publish it on our website.

We don’t discourage players from sharing their performances but even then it shouldn’t be too easy to be in the spotlight. I mean they shouldn’t be getting publicity for playing in their backyards. There needs to be a proper eligibility to appear in news. But this isn’t going to stop until we all step up, especially the sportspersons themselves. They have to create a reputation for themselves and not take pride in featuring on these Facebook pages who struggle to even spell their names correctly.

And most importantly, the players, especially youngsters, should rather concentrate on making it big. Once they do good at the national level, the publicity comes by itself. They wouldn’t need to contact these Facebook admins, but they will receive calls from journalists of big media houses from there. So, the need of the hour is to save yourself from this Facebook stardom and rather work on skills to grow into a real-life star.

Mohsin Kamal is the editor of Kashmir Sports Watch. You can reach to him at 64mohsinkamal@gmail.com 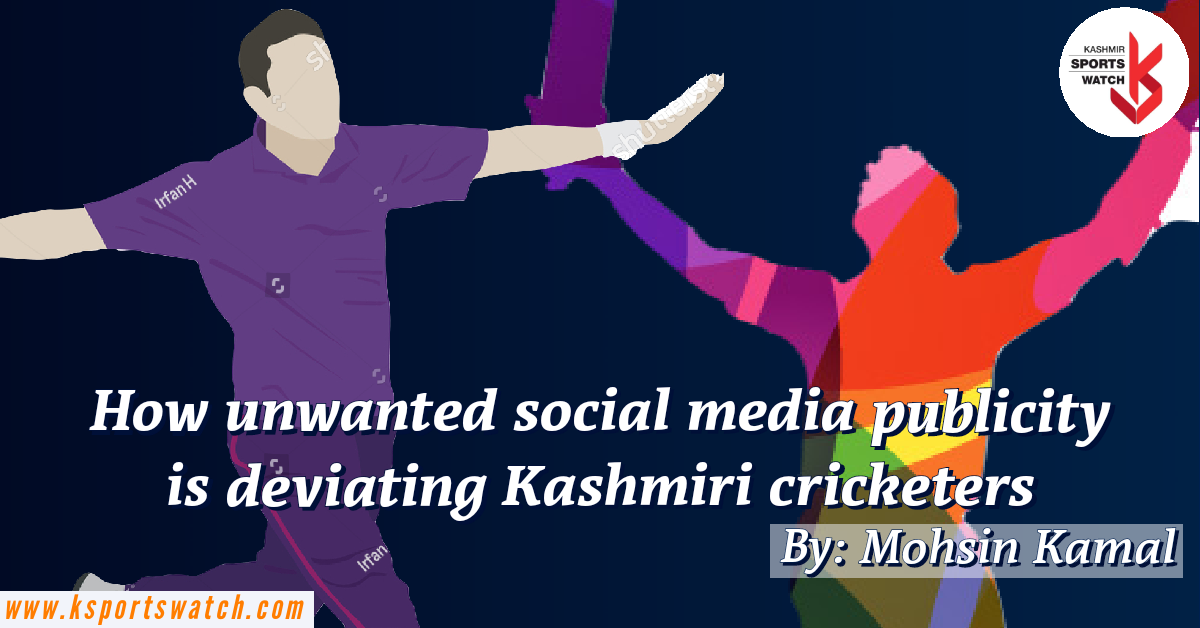