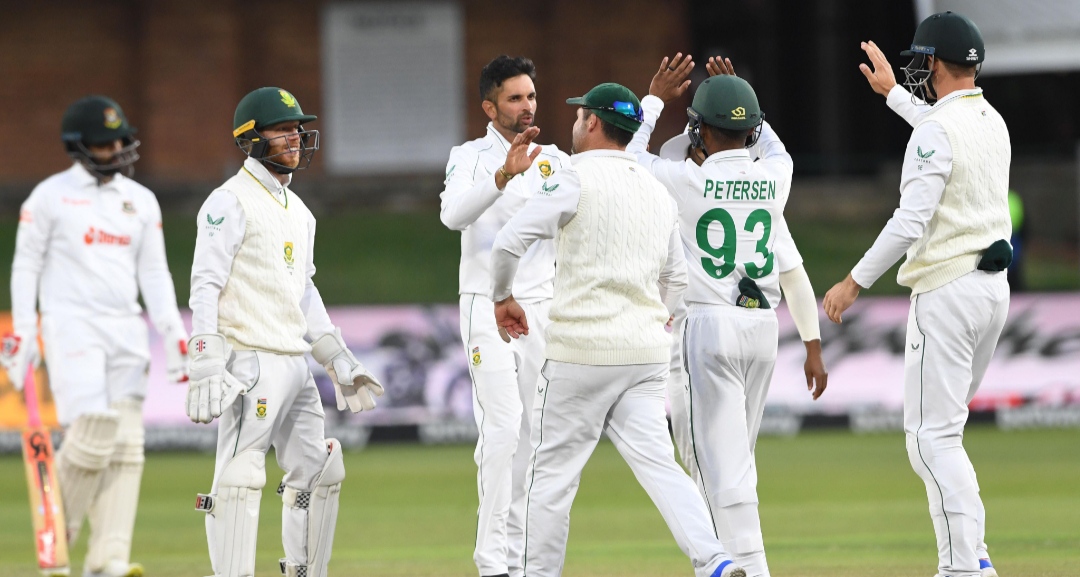 Johansberg, April 11: Keshav Maharaj worked his magic with the ball yet again to complete his second seven-for of the series as South Africa completed a 332-run win against Bangladesh in the second and final Test.

Bangladesh’s resistance lasted just around an hour on day four as Maharaj spun a web around the batters. The visitors were bowled out for 80 in their second innings as South Africa swept the series 2-0.

The win solidified South Africa’s position in the ICC Men’s World Test Championship standings, where they are currently second with a points percentage of 71.42. Bangladesh are second from bottom with 16.66.

Before the start of play on the day, South Africa were rocked by the news of Sarel Erwee and Wiaan Mulder testing positive for COVID-19. However, it had no bearing on their performance on the pitch as they ran through the rest of Bangladesh’s batting line-up to complete the sweep over the visitors.

Starting the day at 27/3, Bangladesh lost their veteran batters, Mushfiqur Rahim and Mominul Haque, in consecutive Maharaj overs. Yasir Ali didn’t look to hang around and went for a big shot, but holed out in the deep for a duck.

The 25-run stand between Liton Das and Mehidy Hasan Miraz was Bangladesh’s highest of the innings. But as Das looked to find the fence, he strayed out of the crease to Maharaj and was stumped – it was Maharaj’s second five-for of the series.

The left-arm spinner picked two more wickets in his next over to complete his second seven-wicket haul in as many games. In doing so, he became the first player in Test history to complete two seven-fors in the fourth innings of consecutive Tests.

Simon Harmer finished off the game, trapping Taijul Islam for a duck as South Africa walloped Bangladesh by 332 runs.

Earlier in the Test, South Africa posted a huge first-innings total of 453 on a pitch that had already shown signs of wearing. Though none of the batters scored big runs, four of them scored half-centuries, while the others got decent starts.

Maharaj had contributed with the bat as well, his whirlwind 84 being the highlight of the first innings. In response, Bangladesh were bowled out for 217, with both pacers and spinners chipping in with five wickets each.

The Proteas chose not to follow on and scored 176 quick runs before declaring to set Bangladesh a chase of 413. It was a target they fell well short of.