Kumble reveals why he quit as coach

MUMBAI: Anil Kumble finally tweeted the reasons which forced him to resign from his post of Indian cricket team’s head coach.

Kumble said that his partnership with Kohli was ‘untenable’ hence it was necessary that he quit. “It was apparent the partnership [with Virat Kohli] was untenable, and I therefore believe it is best for me to move on,” he wrote in the tweet message. 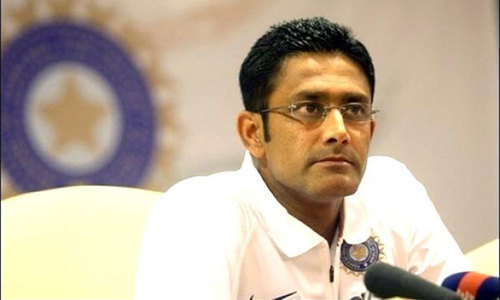 Kohli also revealed in his tweet message that the CAC and the BCCI both wanted him to continue as the coach of India.

However, Kumble claimed that he had been told for the very first time on June 19 that Kohli had reservations with his ‘style’ of coaching.

“In light of these ‘reservations’, I believe it is best I hand over this responsibility to whomever the CAC and BCCI deem fit,” he wrote.

The media had been rife with reports of Kohli’s lack of understanding between Kumble even at the start of the Champions Trophy.

According to another source, Kumble sat down the Indian cricket team with the players and scolded them like schoolchildren after their loss to Pakistan.

Kohli, known for his possessiveness towards his team-mates, did not particularly enjoy that behaviour from the head coach.

Meanwhile, Kohli on Thursday deleted his tweet of 2016, welcoming Kumble as coach of the Indian team.

Kumble had taken over as coach in June last year.

Kohli, in his welcome tweet dated June 23, 20016, had said: “Heartiest welcome to @anilkumble1074 Sir. Look forward to your tenure with us. Great things in store for Indian Cricket with you.”

After Kumble stepped down, the Indian captain went on to delete his tweet.

The welcome tweet by Kohli is unavailable but the reply of the legendary leg-spinner can still be seen on the Twitter.

Acknowledging Kohli’s welcome tweet, Kumble had replied by saying: “Thanks @imVkohli looking forward to working with you and team India.”

The India captain on Thursday responded to former coach Kumble’s observations about why he quit the post of head coach and said that while the players respect him, the sanctity of the dressing room needs to be maintained.

“(But) what happens in the dressing room is sacred and private,” alluding to the comments made by Kumble.

“It is important to maintain the sanctity of the dressing room,” he further added.