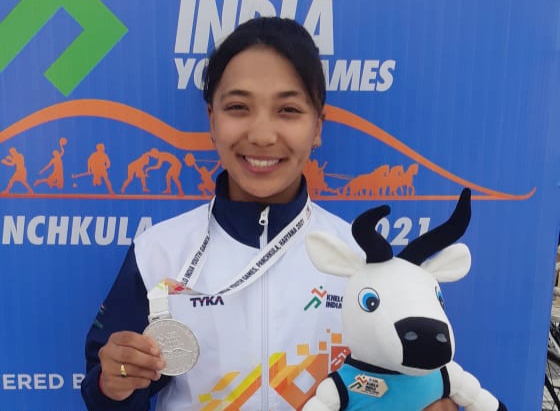 Panchkula (Haryana), June 11: Leakzes Angmo is the lone woman cyclist in the tiny contingent of Ladakh. Back home, in a village called Nurla Yokmappa Stalam, she is already a celebrity.After winning the first medal for her proud Union Territory ¬ a glittering silver ¬ in the Khelo India Youth Games here, she can expect a war hero’s welcome on her return.

But a day before her 20km Individual Road Time Trial, Leakzes was downcast and had all but given up hope of securing a medal.

“I froze when I saw the equipment of my co-competitors. My cycle seemed outdated in front of theirs. Most of them had carbon discs on their wheels,” Leakzes explained, conceding a marked handicap.

But just before the race, she somehow managed to borrow a set of wheels from another cyclist and sped away to glory.

“Each of these carbon discs costs Rs 1 lakh. I can’t afford them,” she confessed. “Every international cyclist now uses them. It allows them to conserve a lot of critical energy,” she added after clinching the silver behind Karnataka’s Chaitra Borji.

“If I had a properly equipped cycle, I could have got a better result,’’ the 19-year-old used.

Leakzes emergence in cycling from a remote outpost is fascinating.

“As a kid, I used to peep out of our home windows and watch skaters practise on ice. Every time someone fell, we would rush out to help them and I would take the opportunity to run away on my bulky cycle,” she recalled.

“I began to cycle around, alone, 15 to 20 km, just for fun, as there wasn’t anything else to do in the snow-capped mountains of Ladakh. Temperatures plummeted below minus 10 during winters, forcing us to remain indoors most of the time.”

In her 15th year, the Cycling Federation of India came calling with a competitive event, changing her life forever.

“My parents (father Ishey Dawa and mother Rigzin Yangdol) encouraged me to participate in it. A year later, I was selected to join the SAI Academy in New Delhi,” she said, narrating the sequence of events.

“I was surprised to receive the letter after such a long time. But my parents were thrilled and my journey in the sport commenced,’’ she explained.

“It was a new world for me. Most importantly, I was amused when I got the first feel of a competitive cycle. It was stunningly lighter than the bulky one in my village. It took me months to adjust to its lightness,” she laughed.

It wasn’t long before Leakzes started delivering results, though. In her first National track cycling championship, she even secured a gold medal. “We celebrated my victory in a very big way in my village.’’

She cornered glory in the National School Games in 2018-19 and 2019-20, winning gold medals in Time Trial and Team Sprint. She took a silver in the 2020 Khelo India Games in Guwahati too.

Her big moment, however, came in the presence of her parents, when she raced away to the gold in the Ultimate Ladakh Cycling Championship in 2020.