Lahore all set to host major hockey clash after 24 years

LAHORE: Lahore will host an elite international hockey contest after a long gap of twenty-four years when a star-studded World XI side take on Pakistan’s U-18 team in the second tie of the two-match series at the National Hockey Stadium on Sunday.

China played a four-test hockey series in Pakistan some seven years ago and Oman’s U-18 team featured in a test series on Pakistan soil in 2016.

Now after a long time, a World XI outfit, comprising a galaxy of stars from top hockey nations, is touring Pakistan to help end the drought of international hockey in the country which has not been able not host any high-profile international hockey event for many years mainly owing to security concerns.

The World XI tour has been arranged by the Pakistan Hockey Federation to revive the game in which Pakistan has during the last 23 years struggled at international level, with no title in grasp, not even at Asian level.

“It is a good omen for our hockey that the World XI is playing in Pakistan. Convincing world renowned hockey players to come and play hockey in Pakistan is a big achievement of the PHF as we have been deprived of high-profile events due to security issue in our country,” said PHF secretary Shahbaz Ahmed while talking to APP on Saturday.

The World XI side contains players from Australia, Holland, Argentina, Spain, Germany and New Zealand and all the players are of top stature due to their standing in the game, underlined Shahbaz.

“The Word XI tour has its own significance in a number of ways. It will help us restore international hockey in Pakistan besides providing an ideal opportunity to our youngsters to play alongside the masters of the game,” said Shahbaz, himself one of the all-time celebrated centre-forwards of the game.

“The World XI tour will also help organise Pakistan hockey league in April this year in a professional way.”

Shahbaz added, “The World XI tour is vital for injecting new life into our dying hockey; it will restore the confidence of other hockey nations for touring Pakistan. Furthermore, this [World XI] series will offer the lovers of the game a great chance to watch big names of world hockey in action in their own backyard,” he added. 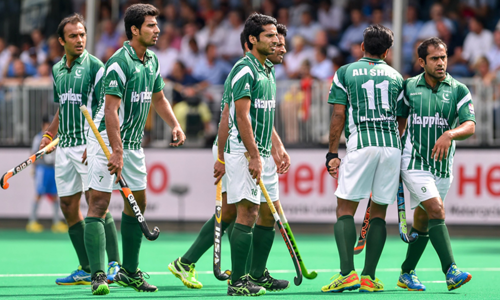