List of Highest Paid athletes in 2022, Virat Kohli only cricketer to feature 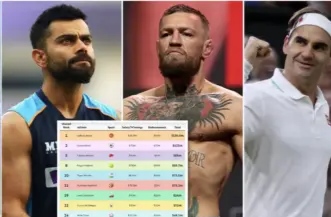 Srinagar, May 12: Football superstar Lionel Messi and NBA Super Star Lebron James top the list of highest paid athletes of World in 2022 while as India’s cricket superstar Virat Kohli is the only one to make it to top 100 from Cricket.

LeBron James and Lionel Messi both have raked over an estimated $120million in 2022.

According to the list of the world’s highest-paid athletes from sportico.com, the top 100 earners are spread over only 10 different sports.

The total collective earnings of the top 100 are an estimated $4.5 billion in salary, prize money and endorsements in the last 12 months, 6% more than last year’s top 100.

The richest man on the list comes from basketball, the richest sport on average, and it’s LeBron James, who is unsurprisingly raking in huge.

Behind him on the list is a football superstar trio of Lionel Messi, Cristiano Ronaldo and Neymar Jr., who all earn over $100 million.

Boxing‘s highest earner Saul ‘Canelo’ Alvarez is right behind them in fifth with $89 million in earnings from putting the gloves on.

The next sport on the list is tennis in eighth, with the legendary Roger Federer earning $85.7 million, mainly from his endorsements and brands, with the Swiss man having quite a few luxury watch brands to choose from at home.

Two other tennis stars, Serena Williams and Naomi Osaka, are the only women to feature on the list.

Golf slots in at 10th with the well-known star Tiger Woods, who is both the most recognisable and most valuable name in the sport, earning $73.5 million.

Further down the list are Formula 1‘s Lewis Hamilton in 19th, the Notorious Conor McGregor for MMA in 22nd, baseball’s Mike Trout in 24th and the last sport being cricket, represented solely by Virat Kohli in 61st.