Srinagar, April 27: Joining the concerned voices across the globe being critical of ongoing Indian Premier League (IPL) 2021 amid current COVID-19 situation in India, former England football great has said it is terribly wrong for it to continue .

The former English footballer turned expert , Gary Linekar has said that it is wrong to see IPL continuing amid such catastrophe in India.

Taking to official Twitter handle , Linekar said ,” I love the @IPL as much as any cricket fan, but it seems so terribly wrong for it to continue given the Covid catastrophe that’s currently occurring in India. People are dying faster than runs are being scored for crying out loud”.

To his Tweet there were both Postive feedbacks as well critical .
Amoung noted who disagreed with Gary Linekar included John Etheridge who Tweeted, ” Tend to agree but one theory is cricket distracts people for 4 hours a day, encouraging them to stay indoors rather than catch or spread the virus. Also, on-screen messages tell viewers to wear masks, social distance and wash hands while TV comms urge people not to leave home”.

“it’s the equivalent to the Premier League continuing here no?, Joshua Jones Tweeted.

To that Linekar replied , ” I think everything would stop here under such circumstances. Also players have flown in from all over the world”.

Gary is not the only one to raise questions about continuity of IPL continuing while common people in India are suffering .
Infact three Australian cricketers have left IPL midway while as India ace spinner Ravi Chandran Ashwin also left IPL to take care of his family.
Australian cricketer Andrew Tye even questioned the money spent by franchisee on IPL while people are unable to find hospital beds. 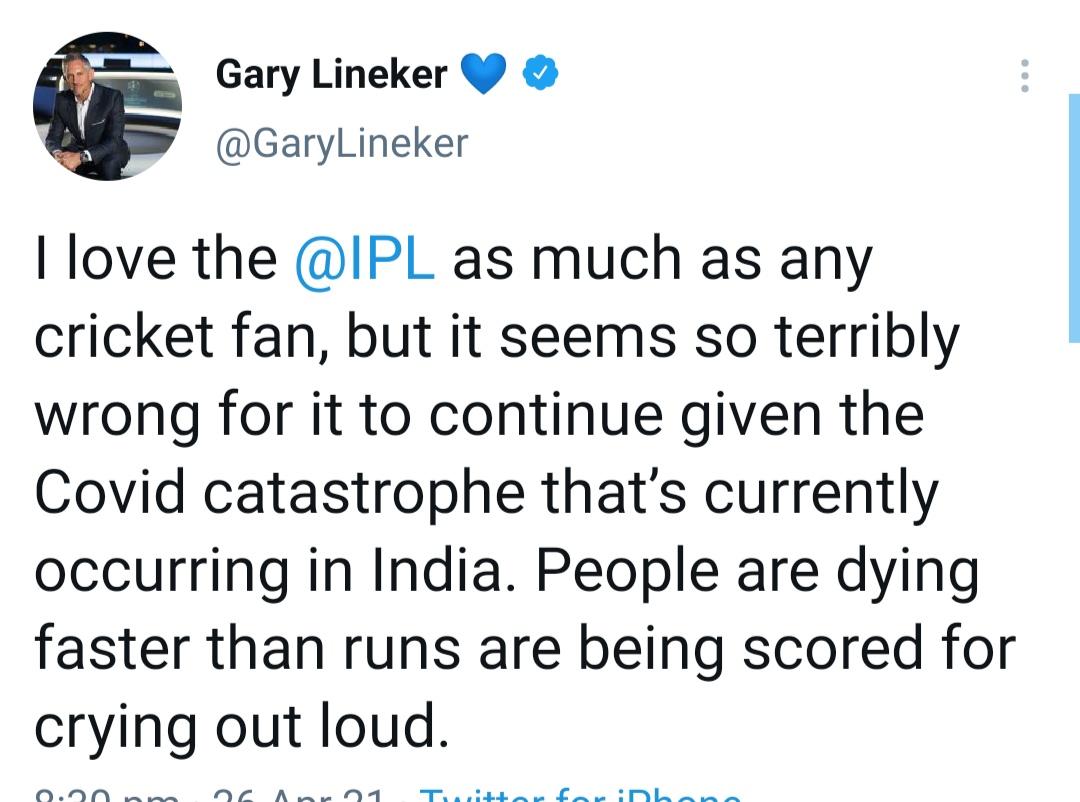 Newer Post
No special arrangement to bring players back from IPL, says Australian PM
Older Post
When people are unable to find hospitals, how are these IPL franchisees spending so much of money: Andrew Tye