Srinagar , Jan 14: Youngsters Mujtaba Yousuf and Abdul Samad shined as J&K stunned star studded Uttar Pradesh by eight wickets in the match of the Syed Mushtaq Ali Trophy T20 tournament at Alur Cricket Stadium Benguluru on Thursday .
After Mujtaba Yousuf set the tone for J&K by his brilliant bowling , Abdul Samad promoted up the order then finished the job by his power hitting to hand J&K a eight wicket win. Uttar Pradesh were able to score 124 runs in allotted 20 overs for the loss of five wickets. In reply J&K achieved target for the loss of only two wickets in 15 overs.
Earlier J&K won the toss and opted to field first . The decision proved right as Mujtaba gave Uttar Pradesh back to back blows in second over of the inning . He removed International cricketers , Karan Sharma and Suresh Raina within space of three deliveries . Raina couldn’t even open his account and was out for duck.

It was momentum that J&K needed and it never allowed Uttar Pradesh get into the rythem for the big total. UP were able to post 124 run total for the loss of five wickets in allotted overs . For UP, skipper Priyam Garg top scored with 35 while as Shubham Chaubey scored 28 and Madhav scored 26. For J&K, Mujtaba was brilliant with the ball, taking three wickets in four over spell giving away only 14 runs . Abid Mushtaq and Abdul Samad took one wicket each.
In reply J&K started their inning with new opening pair of Qamran Iqbal and Suryansh Raina . The duo gave J&K steady start by posting opening stand of 32 runs in four overs . Qamran was first wicket to fall in J&K inning scoring 17 runs . With low total to chase and top cricketers around the World questioning the late batting order of Abdul Samad, J&K team management sent Sunrisers Hyderabad all-rounder at one down.
It was decision that ultimately turned out right as Samad smacked quick unbeaten fifty to take J&K home with five overs to spare. Initially he took his time but when Shanu Saini was introduced into the attack , Samad smashed three sixes of him. It gave J&K much needed momentum to overhaul the total quickly .Shubham Khajuria who had joined Samad in middle after the fall of Suryansh Raina also started to play his shots.
The duo helped J&K achieve target in 15 overs for the loss of two wickets .Samad scored winning run by smashing a big six and completed his fifty as well. He finished with 54 from 35 deliveries while as Shubham Khajuria scored unbeaten 34 from 25.
For UP, Mohsin Khan took two wickets.
J&K bagged four points from the match and jumped to second place on the points table. Punjab stand at top with 12 points while as Karnataka and Railways stand at third and fourth place respectively with eight points each. J&K also have eight points but with now better run rate stand at second place .
Tripura and UP stand at fifth and sixth place respectively and are yet to win any match.
J&K is scheduled to play its next match against Punjab on Janaury 16. 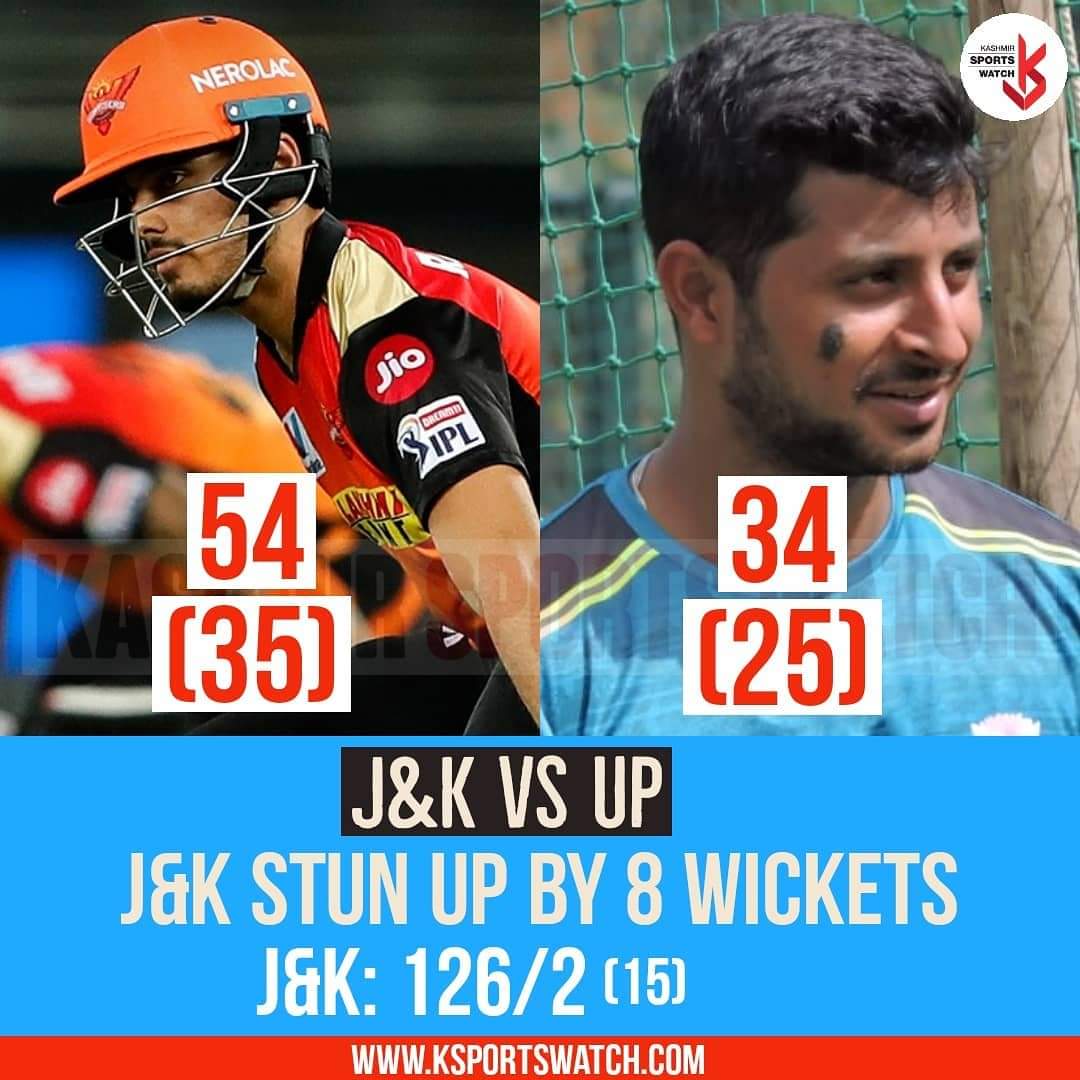