Misbah’s will be a hard act to follow: Sarfraz

KARACHI: Sarfraz Ahmed, who led Pakistan to the magnificent ICC Champions Trophy win last month, pledged to lead by example after being appointed the country’s new Test skipper on Tuesday.

Talking to Dawn shortly after attending a reception held in honour of the team by Prime Minister Nawaz Sharif in Islamabad on Tuesday, Sarfraz expressed his gratitude to the PCB for naming him as Misbah-ul-Haq’s successor as Test captain.

“Obviously, it is a great honour to be named as captain of the Pakistan Test team. After being asked to lead the T20 side and the ODI team, this appointment comes as another big challenge for me,” Sarfraz said. “I would like to offer my gratitude to the PCB chairman [Shaharyar M. Khan] for keeping faith in my abilities.” 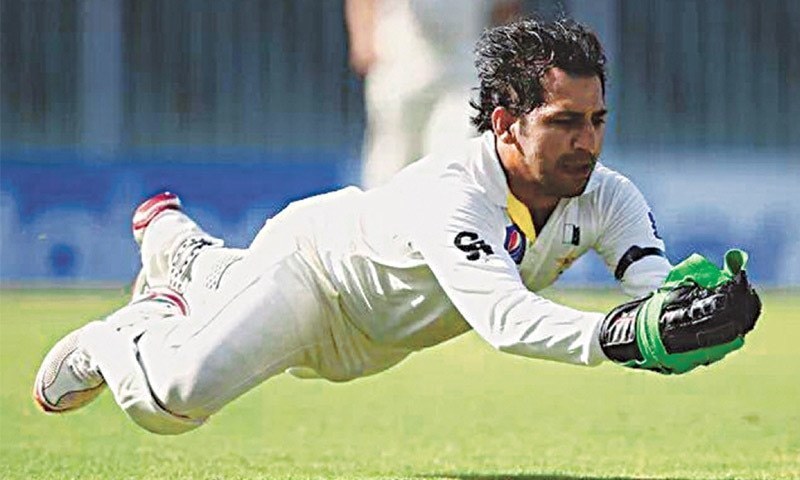 Commenting on the future Test assignments, which he will have to undertake sans the calming presence of Misbah and prolific run-scorer Younis Khan, Sarfraz said the void created by the duo’s departure leaves a huge vacuum in the middle-order batting.

“Of course, Pakistan will greatly feel their absence and there is no doubt about it. But like everyone else, there comes a time in one’s career as a sportsperson when you stop playing.

“Misbah and Younis played [for Pakistan] with great distinction and their immense contribution will never be forgotten. They are true legends of world cricket who served the sport with dignity. We will not only miss their batting but the camaraderie they brought into the team,” said Sarfraz who has so far captained Pakistan to seven wins in nine ODIs and another seven in eight T20 Internationals.

“But we have to prepare well for the future. Players come and go but the game goes on. I’m sure with the passage of time Pakistan will continue to develop into a competitive unit. Misbah did a wonderful job over a long period as leader of the Test side. Therefore, I have a hard act to follow.”

Sarfraz, in fact, will emulate Misbah — Pakistan’s most successful Test captain with 26 victories in 56 matches — by leading the country in all formats at the same time.

The soft-spoken Sarfraz, who has played in 36 Tests, 75 ODIs and 29 T20Is, further added that Pakistan must keep on improving as a team to challenge the best sides in the world.

“As I had said before, that we will continue to work as hard as possible and not sit on our laurels [of winning the Champions Trophy] because cricket is very competitive nowadays and there is little margin for error,” he remarked.

“The Champions Trophy win has definitely raised our confidence but we must always guard ourselves against being complacent.”