Centurion, December 29: Mohammad Shami ran through South Africa’s batting order, picking up his sixth five-wicket haul in Test cricket to put India in a commanding position at stumps on day three in Centurion.

There was plenty of action on the moving day of the Boxing Day Test in Centurion between South Africa and India, with 18 wickets falling, compensating for the lack of cricket on day two due to rain.

With the pitch assisting the pacers, the Indian bowlers made life difficult for the South African batters from the beginning. Mohammad Shami was the wrecker in chief for India with a five-wicket haul as the Proteas were bowled out for 197.

India lost Mayank Agarwal just before the end of the day’s play, finishing on 16/1 at stumps, with a lead of 146 runs.

Earlier in the day, starting at 272/3, India collapsed and were bowled out for 327, with Lungi Ngidi leading the way with a six-wicket haul.

KL Rahul was the first to make the walk back for India, adding just one run to his overnight score of 122. Cramped for room, Rahul was done by Rabada’s short-pitched delivery, as he feathered it to the gloves of Quinton de Kock.

Ngidi then hurried Ajinkya Rahane with bounce, caught behind two runs short of a half-century. Rahane’s wicket started a procession, with India losing four more in the next four overs as Rabada and Ngidi made full use of the pace and bounce of the track.

Rabada then drew a leading edge of Ravichandran Ashwin’s bat which carried into the hands of short cover. Ngidi got his third five-for in Tests against India with the wicket of Rishabh Pant. Shardul Thakur and Mohammad Shami got out in similar fashion, attempting a big shot but only managing to edge it to de Kock behind the stumps.

Jasprit Bumrah and Mohammad Siraj added 19 important runs for the final wicket before India’s innings folded for 327 when the former was caught at third slip trying to play away from his body.

Needing to survive a tricky period before lunch, South Africa’s innings got off to a disastrous start. Bumrah used the angle against the left-hander to his advantage, inducing an outside edge off Dean Elgar’s bat in the first over of the innings. Keegan Petersen and Aiden Markram then took the Proteas to lunch on 21/1.

Mohammad Shami struck in the first over after the break, with Keegan Petersen playing on to his own stumps. He then got the better of Aiden Markram, beating the right-hander with late movement as the ball hit the top of the off-stump.

Mohammed Siraj soon got in on the act and brought an end to the innings of Rassie van der Dussen, who was lured into playing a delivery well outside off. Siraj almost had de Kock out for a duck and made it two in two, had KL Rahul held on to a catch at third slip.

The wicketkeeper-batter made full use of the reprieve and stitched a very important partnership with Temba Bavuma. Both the batters found the boundaries at regular intervals and took the pressure off themselves.

The two batters continued to grow in confidence, mixing caution with aggression as they got South Africa past the 100-run mark, who at one point were reeling at 32/4.

With just a few over remaining for tea, Virat Kohli threw the ball to Shardul Thakur, and he made an immediate impact as de Kock chopped on to his stumps, thus ending the 72-run partnership.

India had a massive injury scare, with Bumrah hobbling off the fielding after twisting his ankle early in the second session. Thankfully for the visitors, the fast-bowler did make his way back on to the field late in the session, though he did not bowl.

After the break, Bavuma punished the loose bowling from Thakur, smashing him for three fours. Shami, at the other end, continued to wreak havoc, getting the better of Wiaan Mulder. Bavuma soon got to his 16th Test fifty but was dismissed two balls later.

At 144/7, South Africa were once again in a spot of bother and it was the unlikely duo of Marco Jansen and Kagiso Rabada who bailed them out of trouble. Both the batters did not hesitate to play their shots and added a vital 37 runs for the eighth wicket before Shardul Thakur trapped Jansen in front of the stumps.

Shami and Bumrah then picked up a wicket each to wrap up South Africa’s innings for 197, with India leading by a massive 130 runs.

India awkwardly had six overs to bat at the end of the day, and the late South African spurt brought one wicket, the 18th of the day. Given the last over, Marco Jansen struck, angling across Agarwal who edged to de Kock. 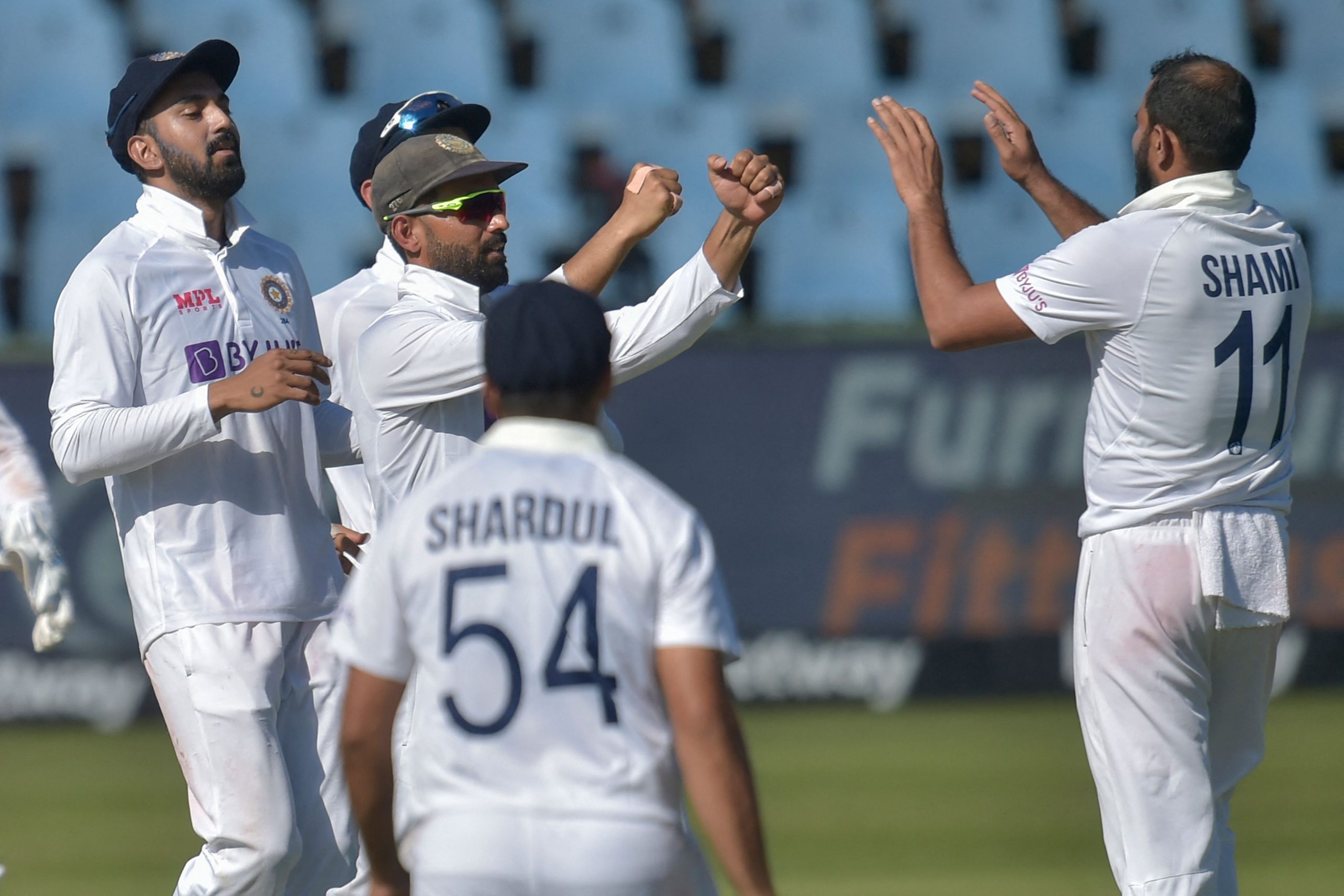