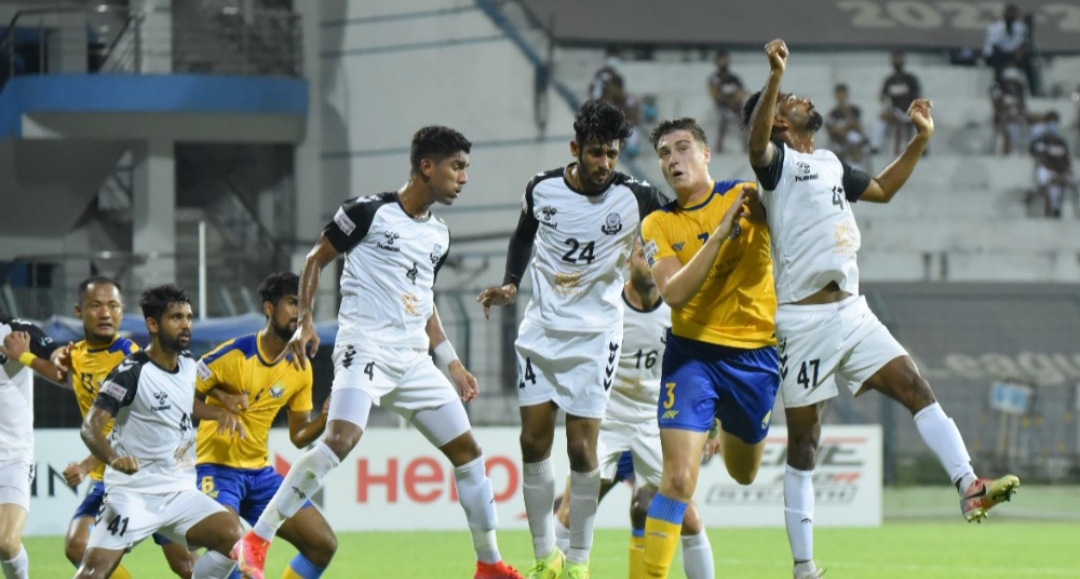 Kalyani, April 15: Mohammedan Sporting Club returned to winning ways and also moved to the top of the table after a comfortable 3-1 victory against Real Kashmir FC, here at the Kalyani Stadium.

A goal from Andelo Rudovic and a brace from SK Faiaz ensured Mohammedan finished the game with three crucial points. Real Kashmir were reduced to 9 men as Pratesh Shirodkar and goalscorer Lalchawnkima were sent off in the second half.

In the first half, Nikola Stojanovic ensured his side started on the front foot by playing a delightful long ball from midfield straight into the box towards the strikers. However, the players were unable to apply the finishing touch to it. The moment was forgotten shortly after that as Andelo Rudovic opened the scoring for Mohammedan in the twelfth minute. Marcus Joseph played a brilliant defence-splitting pass while Rudovic kept his run in check to stay onside, after which the Bosnian carefully placed the ball past the keeper.

Mohammedan were dealt a blow when Milan Singh went down and had to be stretchered off in the eighteenth minute and was replaced by Phrangki Buam.

After going a goal down, Real Kashmir were on the attack and desperate for an equaliser. Mason Robertson tried his luck from distance but could not challenge keeper Mithun Samanta with his strike. Moments later, Shimray Thomyo found himself with the ball just outside the box but the forward’s tame effort was easily collected by the keeper.

Bernard Kouassi kept wriggling through the Mohammedan defence but saw his efforts get blocked. Another opportunity fell to Thomyo again but this time Wayne Vaz stopped the forward with a well-timed challenge in the box.

Towards the end of the first half, Mohammedan came very close to doubling their lead as they broke on the counter and Joseph slid the ball in towards Rudovic. The ball was intercepted by Ponif Vaz, who almost put the ball into the back of his own goal.

The tempers came down moments later when Real Kashmir bagged a much-needed equaliser through Lalchhawnkima. The defender was the first one to pounce on and tap-in an amazing cross from Ragav Gupta.

The joy and relief for Real Kashmir was quite short-lived as Pratesh Shirodkar received a second yellow just moments after the equaliser.

Down to ten men, Real Kashmir were shaken and things went from bad to worse for them just six minutes later when SK Faiaz restored Mohammedan’s lead in the game. A sublime 1-2 between Joseph and Rudovic saw the latter unmarked with the ball on the left flank. The Bosnian whipped a low cross in across the face of goal and Faiaz tapped it in at the far post.

Moments later, Mohammedan suffered another injury blow as Shaher Shaheen went down and had to be stretchered off. Despite that, Mohammedan were comfortable on the pitch.

The game was put to bed in the 89th minute when Faiaz doubled his tally of the night by cutting in from the left and seeing his deflected shot fly into the goal. To add to the horrors of Real Kashmir, their goal scorer Lalchhawnkima was booked for a foul and received a second yellow for sarcastically applauding the booking.

This crucial win for Mohammedan takes them to the top of the league having played a game more than second-placed Gokulam Kerala FC, who are just a point behind. Real Kashmir stay in eighth needing only a miracle to lift them into the final Championship Playoff spot.