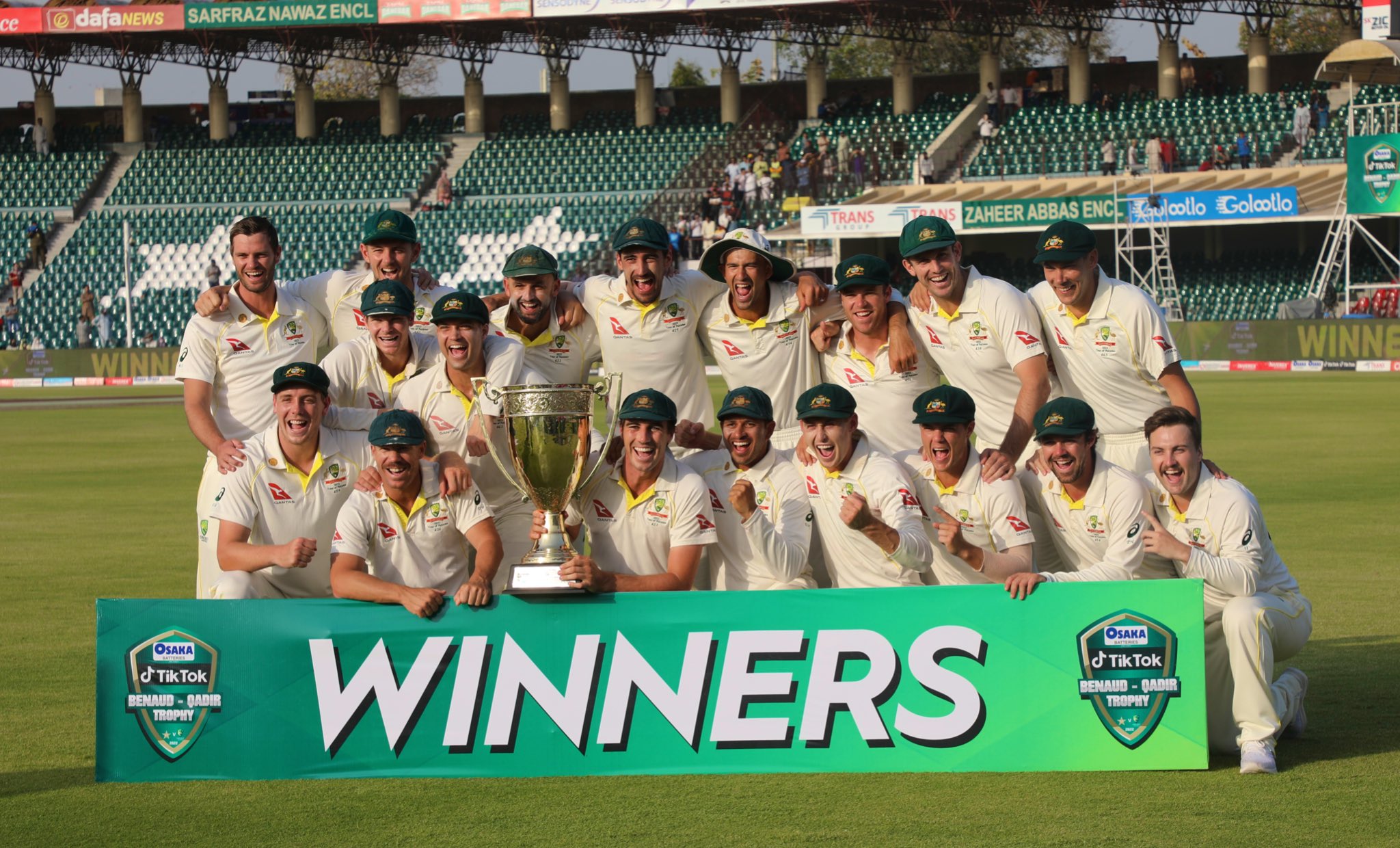 Australia’s decision to declare early and set a target of 351 with over 100 overs left to play did raise a few eyebrows yesterday. However, Cummins and his men proved that they made the right decision as they beat Pakistan by 115 runs with the match going into the final session.

Nathan Lyon made merry of the fifth-day pitch and picked up a five-wicket haul to break the back of Pakistan’s batting lineup. He was well supported by his skipper, who picked up three important wickets on the final day.

Australia posted 391 in the first innings on the back of fifties from Usman Khawaja, Alex Carey and Cameron Green. In reply, Pakistan were cruising along with 248/3 before a stunning collapse that saw them lose the last seven wickets for 20 runs.

The dream run of Usman Khawaja, who was adjudged the Player of the series, continued as he scored his century on the tour, soon after which Australia declared, setting Pakistan a target of 351.

Pakistan started brightly but Australia took command of the game on the final day, winning the match by 115 runs.

The win solidifies Australia’s place at the top of the ICC World Test Championship while Pakistan slipped from second to fourth after the loss.

After surviving 27 overs in the final session before stumps on Day 4, Pakistan batters started at 73 for 0, requiring another 278 runs for a victory in the series decider. Pakistan would have wanted the openers to extend their opening partnership but were Pakistan dealt a major blow when Sahfique edged one to the gloves of the wicketkeeper. Cameron Green kept bowling in the channel outside off, which frustrated the batters, particularly Shafique, who eventually edged one to end his gritty innings.

Nathan Lyon troubled the batters on the final-day pitch but Azhar Ali and Imam were rock-solid. Azhar appeared settled at the crease when he smashed two boundaries off Starc, one of which was a confidence-boosting cover drive.

However, Lyon with his tight bowling got the much-needed breakthrough for Australia when Azhar attempted to play a sweep shot to an outside-off delivery and the ball went straight to slips after hitting his pads for 17.

Two wickets in the first session brought Australia back on track as Pakistan went for lunch on 136 for 2 with Imam and Babar Azam at the crease.

Australia deployed spinners straightaway after lunch and the decision paid immediate dividends. Lyon, in his second ball after lunch, sent the set batter Imam back to the pavilion on 70. Lyon landed the ball in the rough outside leg stump, and Imam nicked it onto his pad and straight into the hands of the silly point.

Skipper Cummins then got in on the act, dismissing Fawad Alam leg before wicket for 11. Rizwan followed Alam to the pavilion soon for a duck, as Cummins struck again with brilliant inswinging delivery that hit the toe before hitting his bat. With only one review left, Rizwan decided not to review it, but as it turned out, the decision would have been overturned as the impact was outside off stump.

Sajid survived a few close calls, and Babar, after a rash shot against Lyon, was lucky to have been dropped by Head at deep mid-wicket. Pakistan went into with at 190/5.

Resuming the final session of the series, Babar Azam completed his half-century but edged one to the slips, thus shattering Pakistan’s hope of saving the historic test and series. Lyon’s disciplined bowling paid off as he got the edge of Babar’s bat, with Smith completing a brilliant low catch at slips. In the very next over, Sajid Khan flicked a full-length delivery from Starc straight into the hands of Khawaja at mid-wicket.

Hasan Ali, instead of defending, decided to take the attack to Lyon, hitting him for a six and a four before he was bowled trying to play another big shot. The off-spinner clinched his five-for with the wicket of Shaheen Afridi, who holed out in the deep playing the slog sweep.

Fittingly, skipper Cummins claimed the last wicket as Australia bowled out Pakistan on 235 to win the final Test by 115 runs and clinch the series 1-0.