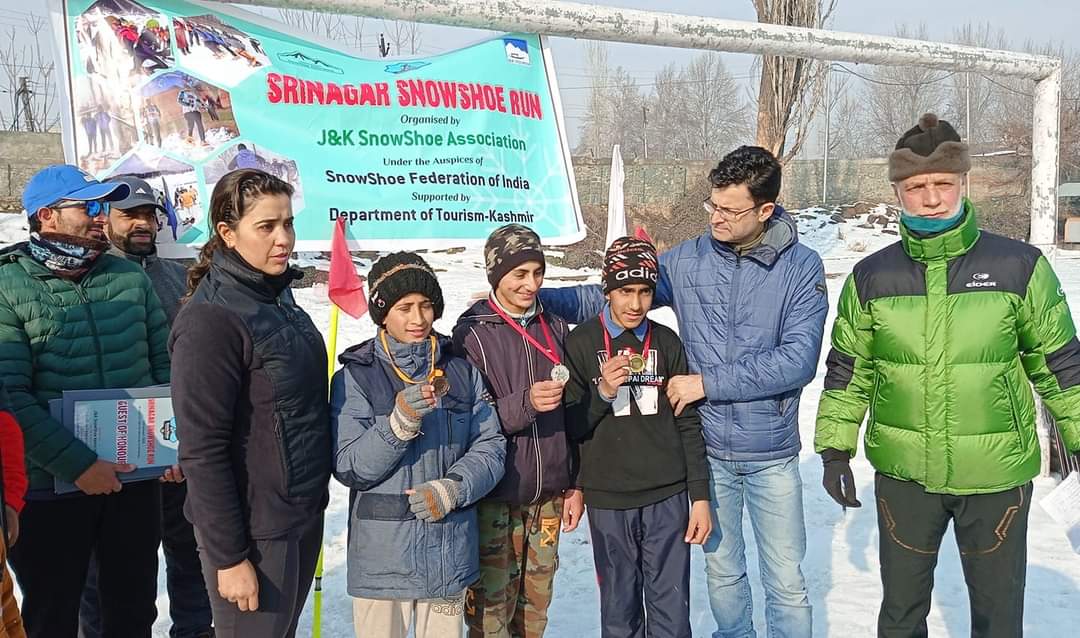 Srinagar , January 17: Celebrating World Snow Day with rest of the World , J&K SnowShoe Association held major SnowShoe event at SP College Ground Srinagar on Sunday, January 17.
The event was organised under the auspices of SnowShoe Federation of India with support from Directorate of Tourism , Kashmir .
The event was organised with the aim to celebrate World Snow Day on January 17 along with rest of the World and hold major Winter Sports activity in Srinagar City.

Mahmood Shah who was chief guest on the occasion distributed prizes amoung the winners in presence of Mir Bilquis , Dr. Altaf ur Rehman and Mushtaq Bashir.
“It is great to see a major winter sports activity being held in city centre of Srinagar . This year Srinagar recieved lot of snowfall and SnowShoe is the activity that can held anywhere where their is snow. I am happy to see these kids enjoying taking part in such events ,” said Mahmood Shah who is also known adventurer of Kashmir .
“We need to encourage these kids to take part in such activities even during winter months. I asked one of the kid what he is doing here , he said he had come to play cricket but due to snow couldn’t do that and then decided to participate in the SnowShoe event being held. It is encouraging and we should encourage them in order to see our future generation excelling in sports events,” he added .
Mushtaq Bashir , a too official of SnowShoe Federation of India said that it is around fourth SnowShoe event held in Srinagar city.
“This year we are celebrating snowfall of Srinagar . It is fourth SnowShoe event organised in Srinagar this year only . However , today’s one is major one as it is suported by Tourism department that provided equipment which encouraged us to involve more participants ,” Bashir said.
“Today’s event coincided with World Snow Day and we wanted to make it memorable . Now we are shifting our focus towards upcoming 2nd Khelo India National Winter Games that are going to be held in Gulmarg.We are going to hold open selection trials for J&K players in Gulmarg before Khelo India event,” said organising secretary Muzamil Hussain.