Pacers fire to make it South Africa’s day in Johannesburg 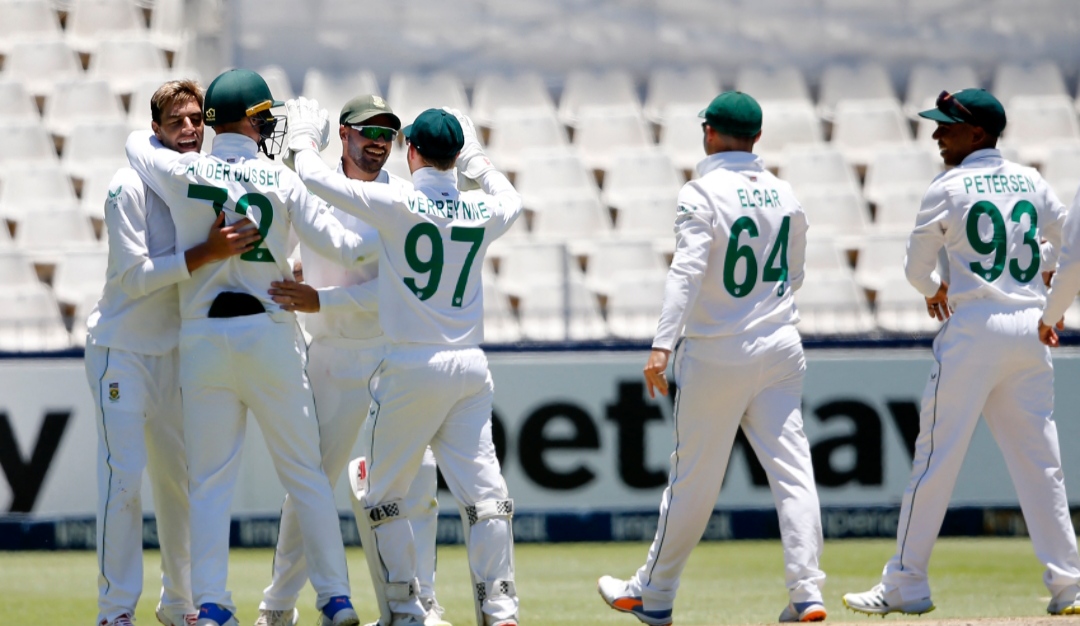 Johannesburg, January 4: A brilliant showing from the South African speedsters helped them bowl India out for 202 on day one of the Johannesburg Test before Dean Elgar and Keegan Petersen took them to stumps at 35/1.

With regular skipper Virat Kohli missing due to an upper back spasm, stand-in captain KL Rahul called it correct at the toss and opted to bat first. Hanuma Vihari was drafted in to replace Kohli while South Africa brought in Duanne Olivier for Wiaan Mulder and Kyle Verryenne for Quinton de Kock respectively.

The Indian skipper along with his opening partner Mayank Agarwal again got India off to a steady start. While Rahul was watchful, Agarwal was the aggressor playing some sublime shots. At drinks, India were 36/0. But the partnership was broken immediately after as Marco Jansen got one to move away from Agarwal, getting the outside edge. The opener had to depart for 26.

South Africa were able to build pressure after the first wicket and Rahul joined by Cheteshwar Pujara had no easy runs on offer. The discipline finally paid dividends as Olivier found extra bounce off the wicket which surprised Pujara. It would turn out to be a simple catch for the man in the gully as Pujara walked back for 3.

Rahane was dismissed in the very next delivery for a duck, as Olivier celebrated his 50th wicket in Test cricket. Playing at a wide delivery tentatively, the former India vice-captain gave a simple catch to third slip.

Rahul was then joined by Vihari as India headed to lunch at 53/3.

Rahul and Vihari would negotiated the opening phase of the second session despite some terrific bowling from the Proteas pacers. They would eventually start to open up their blades with the scoring rate picking up.

Vihari who was dropped on 9 by Bavuma though could not make the most of his second life with Rabada getting his scalp for 20. It was a moment of genius from Rassie van der Dussen at short leg taking a flying catch which brought about his dismissal.

Rishabh Pant would walk onto the crease and immediately started to put the pressure on the bowlers playing some glorious shots through the off-side. Rahul also brought up his half-century as India aimed to make this a big stand.

A short delivery from Jansen would do the trick against Rahul as he could not control his hook shot perishing immediately after scoring his fifty. It was another brilliant moment in the field for South Africa with Rabada now taking a stunner.

As Pant turned watchful, Ravichandran Ashwin became the aggressor, scoring at more than run-a-ball as they took India to tea at 146/5.

Pant could not hang around for much longer after tea getting an inside edge off Jansen’s bowling to be dismissed for 17. Thakur also soon followed suit, walking his way back to the pavilion for a duck giving catching practice to gully against Olivier.

Ashwin now sensing that he would soon run out of partners, started playing some scintillating strokes. Mohammad Shami also chipped in with 9 runs before Rabada took a brilliant caught and bowled to dismiss him.

Ashwin’s invaluable contribution would finally come to an end on 46 as he completely miscued an upper-cut against Jansen. Bumrah would play a couple of big shots to get India’s total past 200 before Siraj was the final man to be dismissed getting a faint edge down the leg-side against Rabada.

India had the perfect reply with Mohammad Shami again working his magic with the ball. He trapped Aiden Markram in front of the stumps for 7 as South Africa lost their first wicket relatively early.

Shami alongside Bumrah and Siraj kept the pressure up but skipper Dean Elgar and Keegan Petersen ensured that there would be no further hiccups. South Africa would end the day at 35/1, trailing by 167 runs.