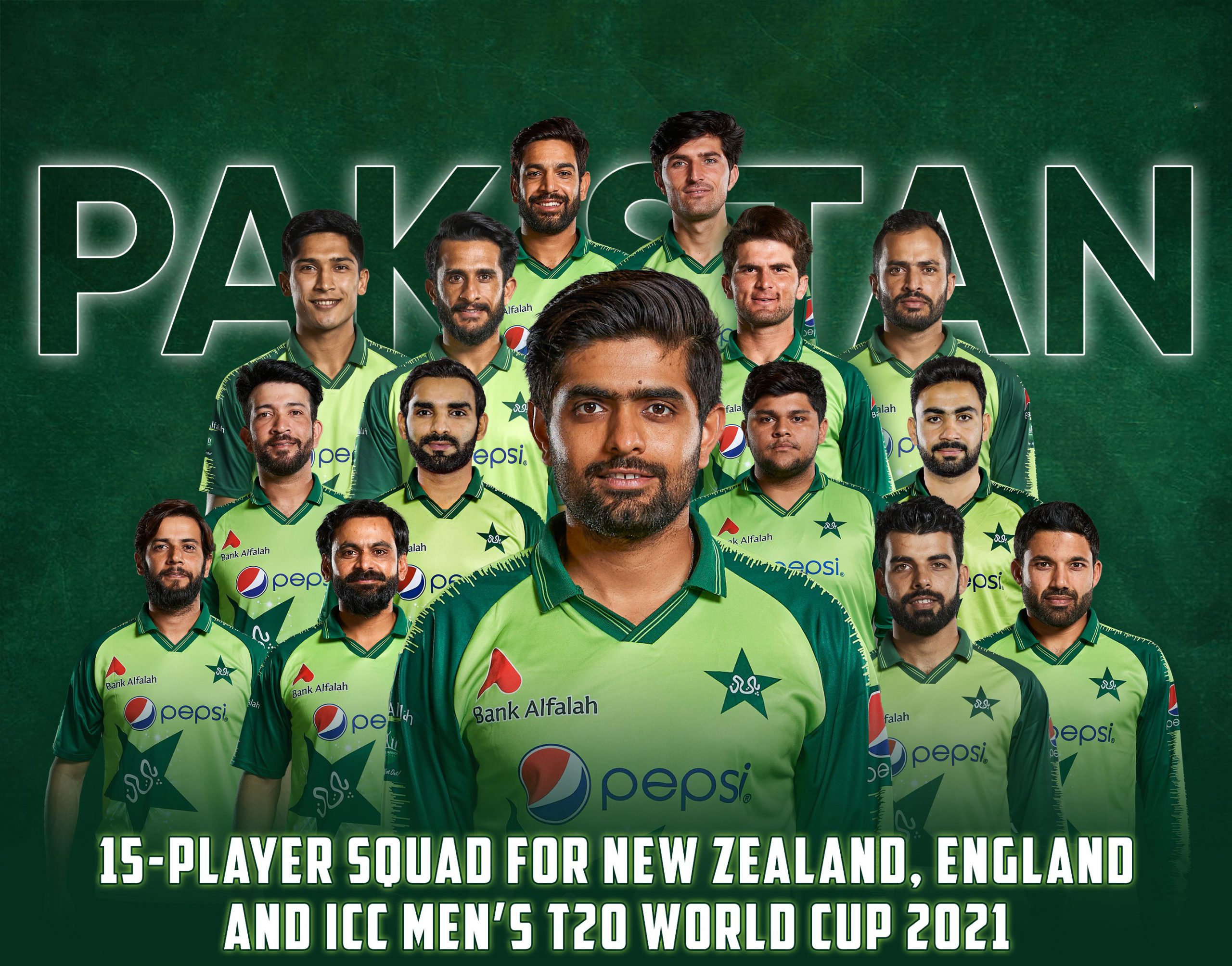 Lahore, 6 September 2021: Pakistan on Monday announced its 15 member squad for the ICC T20 World Cup and also for the upcoming Twenty20 Internationals against New Zealand and England.

The seven home T20Is in Lahore and Rawalpindi will be played from 25 September to 14 October, while Pakistan will proceed to take on India in a battle of former champions in their ICC Men’s T20 World Cup opener in Dubai on 24 October.

Domestic performers Asif Ali and Khushdil Shah have been drafted into the side to provide more firepower in the middle-order.

From the 19 players who were part of the Pakistan squad for the T20I series in England and the West Indies, Arshad Iqbal, Faheem Ashraf, Fakhar Zaman, Sarfaraz Ahmed, Sharjeel Khan and Usman Qadir have been left out, though Fakhar and Usman along with Shahnawaz Dahani have been named as the three traveling reserves.

Chief Selector Muhammad Wasim: “While selecting the squad, we have tried to cover all our bases by catering for the modern day brand of T20 cricket that will be required to perform impressively in the ICC Men’s T20 World Cup. This includes trusting the abilities, skills and experience of the players to perform in a high-pressure global tournament in conditions that are familiar to us, as well as looking at the teams we will play in Group-2 matches.

“Asif Ali and Khushdil Shah may not have impressive numbers against their names but hardly anyone can doubt their tremendous talent and prowess. They are the best in the available pool of middle-order batsmen and we remain confident that they will provide us solutions to our middle-order difficulties through solid performances.

“These two experienced middle-order batters will compliment Babar Azam, Mohammad Hafeez, Mohammad Rizwan and Shoaib Maqsood, while in Imad Wasim, Mohammad Nawaz and Shadab Khan, we have three top-quality spinners who are equally good with the bat and outstanding in the field.

“Azam Khan is an aggressive and attacking batter who also keeps wickets, a combination that has earned him the selectors’ nod ahead of Sarfaraz Ahmed. Mohammad Wasim Junior has been preferred over Faheem Ashraf due to his pace and ability to hit big shots. Wasim will bolster the fast bowling unit, which comprises Haris Rauf, Hasan Ali, Mohammad Hasnain and Shaheen Shah Afridi.

“Fakhar Zaman, Shahnawaz Dahani and Usman Qadir were unlucky to miss out on the selections. Sohaib Maqsood’s ability to bat and perform anywhere in the top-order has given him an edge over Fakhar, while the presence of three experienced spinners, who are also capable batters, and five genuine wicket-taking fast bowlers made it difficult for Usman Qadir to get into the side. Like Faheem, an uncapped Shahnawaz was tied with Mohammad Wasim Junior, but we opted for the latter due to his pace and batting abilities.

“Most of these players know the United Arab Emirates conditions better than others as they propelled Pakistan to number-one in the ICC T20I rankings after winning 21 out of 36 matches (13 loses and two no-results). In the lead up to the event proper, they will play seven T20Is at home, which will take their overall tally of T20Is in 2021 to 24 – most by any participating country.

“The home series against New Zealand and England will provide us one-last opportunity to fine-tune our preparations. In doing so, we will like to win maximum matches so that we can carry the confidence and winning momentum to Dubai.

“Our impressive record in the United Arab Emirates, clubbed with the talent we have in our ranks and the well-planned preparations gives me significant confidence that we will perform well in the ICC Men’s T20 World Cup 2021. All the players now need to do is not to get overawed by the occasion, continue to keep faith in their abilities and try to give something extra each time they step onto the field.”

Pakistan’s schedule of T20I matches (all matches to start at 1900 Pakistan time):