Srinagar, April 11: Pakistan senior cricket team on Saturday, April 10 became first side in International cricket to record 100 T20 International wins as they beat hosts South Africa by four wickets.
Overall , Pakistan now has played 164 T20Is and out of them they have won 100 and lost 59.
They have been involved in three ties while as two games were abandoned.
On the second spot in win list are India, who have won 88 in 142 games. The side has faced defeat in 47 matches, while playing out three tied games. Their remaining four games were washed out.
In the third position are three teams with 71 victories each: Australia (in 136 matches), South Africa (128), and New Zealand (145).

Earlier in the match South Africa , won the toss and opted to bat first. Aiden Markram (51) and Henrich Klassen (50) helped their side motor on after openers fell cheaply. The fireworks towards the end were provided by Pite van Biljon, who scored a 24-ball 34.
In reply, wicketkeeper batsman Mohammad Rizwan opened the innings with skipper Babar Azam. The two put on 41 runs for the first wicket before the latter hold out for 14. Fakhar Zaman scored 27 to keep assisting Rizwan at the other end. Haider Ali (14) and Mohammad Hafeez (13) couldn’t do much, while Mohammad Nawaz fell for a duck.
Eventually, it was Faheem Ashraf’s 30 that provided able support to Rizwan–with a 48-run stand–as the opener remained unbeaten on 74 to guide his side to victory. Hassan Ali smashed the winning runs after the fall of Faheem.
The two teams lock horns again on Monday, April 12. (With inputs from Hindustan Times) 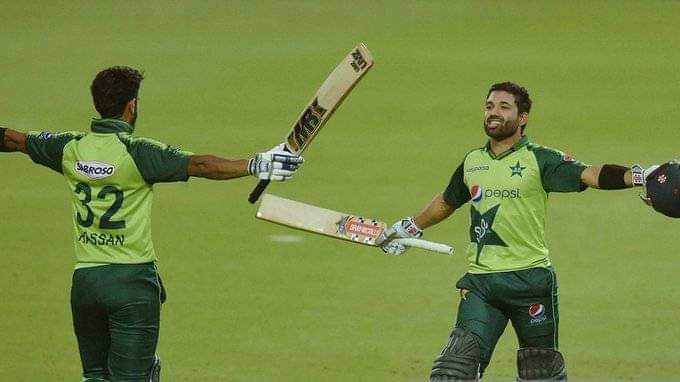