Pakistan look to bounce back in second NZ one-dayer

0 January 8, 2018 1:54 pm
Former captains write to BCCI about JKCA ‘hostile’ environment for cricketers
‘IPL 2020 in UAE a posiibility’
Rain has stopped,play likely to resume after lunch

NELSON: Pakistan’s winning run of nine One-day Internationals came to a shuddering halt in Wellington on Saturday, while New Zealand’s home streak is climbing steadily towards the 12 they achieved across the three formats against Pakistan, Bangladesh and Australia last summer.

After their 61-run win in the first ODI, via the Duckworth-Lewis method, the Black Caps can extend their current streak to nine with victory in game two at the Saxton Oval in Nelson on Tuesday.

The home team’s first seven wins were against West Indies on their forgettable six-week sojourn, which also featured a Twenty20 washout. Pakistan were a step up and arrived with a swagger, didn’t play terribly but were blown off the Basin Reserve by a gale force southerly and a super confident home side.

Pakistan, hopefully, will be better for the run in Nelson, having not played an international since Sri Lanka in late October. But, barring a significant off day from the hosts, it’s difficult not to see the five-match series trophy being secured by the Black Caps and their home trot extending to 10 in Dunedin on Saturday night.

A gripping contest would be welcomed by all.

“In a series it’s the same for us, we’re expecting to raise the bar each game,” said New Zealand batsman Henry Nicholls.

Pakistan are capable against any side, as they showed when beating India in the ICC Champions Trophy final in England in June, but they struggle to match this New Zealand lineup. There’s that streak word again: six straight ODI defeats for Pakistan against the Black Caps in this country, stretching back to 2011.

Much like the West Indies matches, the Black Caps were aggressive up front and never allowed their visitors a sniff in Wellington; taking charge with the bat via Colin Munro’s power hitting and Kane Williamson’s craftsmanship to post 315-7, before Tim Southee and Trent Boult tore through the top order to leave Pakistan’s innings crippled at 54-5.

Two men are key figures for the tourists to take the Black Caps to the wire.

Opener Fakhar Zaman lived up to his billing while his more experienced batting cohorts crumbled, scoring 82 not out off 86 balls and clearing the rope four times before the rain arrived.

“We are a bit used to it [wind], but here it was windy and it was cold. Not like Karachi, but we will adjust,” Fakhar said. “You can’t relax against any of their bowlers so you should play your natural game against them and come hard.”

Key batsmen Azhar Ali and Babar Azam — the latter incorrectly — were trapped lbw in Southee’s first over which flattened the chase. Captain Sarfraz Ahmed had a day to forget, too, dropping Williamson on 26 then lbw to Todd Astle for eight.

The world’s top ODI bowler Hasan Ali had his moments in a 10-over spell of 3-61 but was aggressive and up for the fight, sending off Munro and producing a ripper to remove Ross Taylor.

Saxton Oval pitch will be slower and leg-spinner Shadab Khan should become an increasing threat.

“They [Pakistan] do have a good attack all round, they complement each other well and they’re a well balanced side, much like ourselves. It is a tough series and it’s important we’re good again in the next one,” Williamson said. 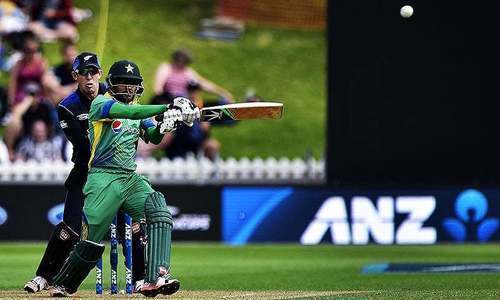