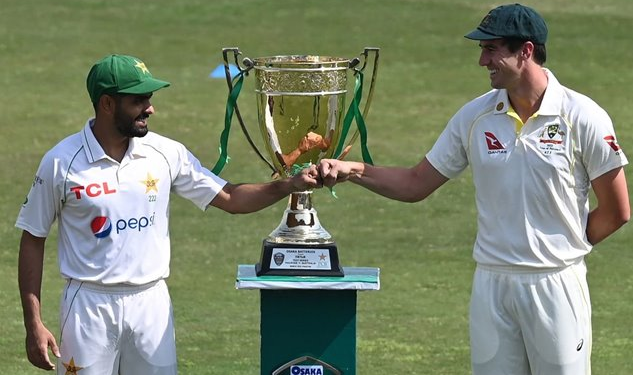 Rawalpindi, March 3: Valuable points in the race for the ICC World Test Championship will be up for grabs when Pakistan hosts Australia in the first of three Tests starting in Rawalpindi on Friday.

It is the first time in 24 years that Australia have toured the south Asian nation and it also features the battle between the teams currently second and third on the ICC World Test Championship points table.

Australia have taken a full-strength squad to Pakistan, but the make-up of their final XI is likely to depend majorly on how they expect each pitch will play.

Quicks Josh Hazlewood and Mitchell Starc appear likely to partner skipper Pat Cummins, while Ashton Agar and Mitchell Swepson are in the touring party should the Aussies choose to provide veteran off-spinner Nathan Lyon with some support.

They also have all-rounders Cameron Green and Mitchell Marsh at their disposal, so there is a lot to ponder for Cummins and interim coach Andrew McDonald ahead of the coin toss on Friday.

Star paceman Shaheen Shah Afridi is certain to ask a lot of questions of Australia’s top-order, while youngsters Mohammad Wasim Jr and Naseem Shah may be given the chance to impress by skipper Babar Azam.

Azam will again be the key wicket that Australia will be chasing, but Azhar Ali, Fawad Alam and vice-captain Mohammad Rizwan have plenty of experience and are more than capable of scoring plenty of runs.

You have to go back more than two years ago to find the last time Pakistan played a Test match against Australia and it was a day-night contest in Adelaide that was dominated by David Warner and the home side.

Warner hit a career-best and unbeaten 335 as Australia amassed a whopping 589/3 declared, before Pakistan were bowled out for 302 and 239 in reply as the Aussies clinched an easy triumph by an innings and 48 runs.

Top-ranked Test batter Marnus Labuschagne was also among the runs with 163, while veteran spinner Yasir Shah scored a brilliant 113 during Pakistan’s first innings.

Muhammad Wasim (Pakistan chief selector): “These are the best available, most talented and in-form players in the domestic circuit. I am confident they will put up an impressive performance against a formidable Australia side.”

Pat Cummins (Australia captain): “We feel lucky to get to come back here after a whole generation didn’t get the chance to play any cricket over here. I think it [Pakistan] has slowly had more cricket here. George Bailey, our selector, came and played a couple of games a few years ago. The Pakistan Super League has also been hugely successful. We’re fortunate that they have come to play us in Australia and it’s great we can return the favour.”