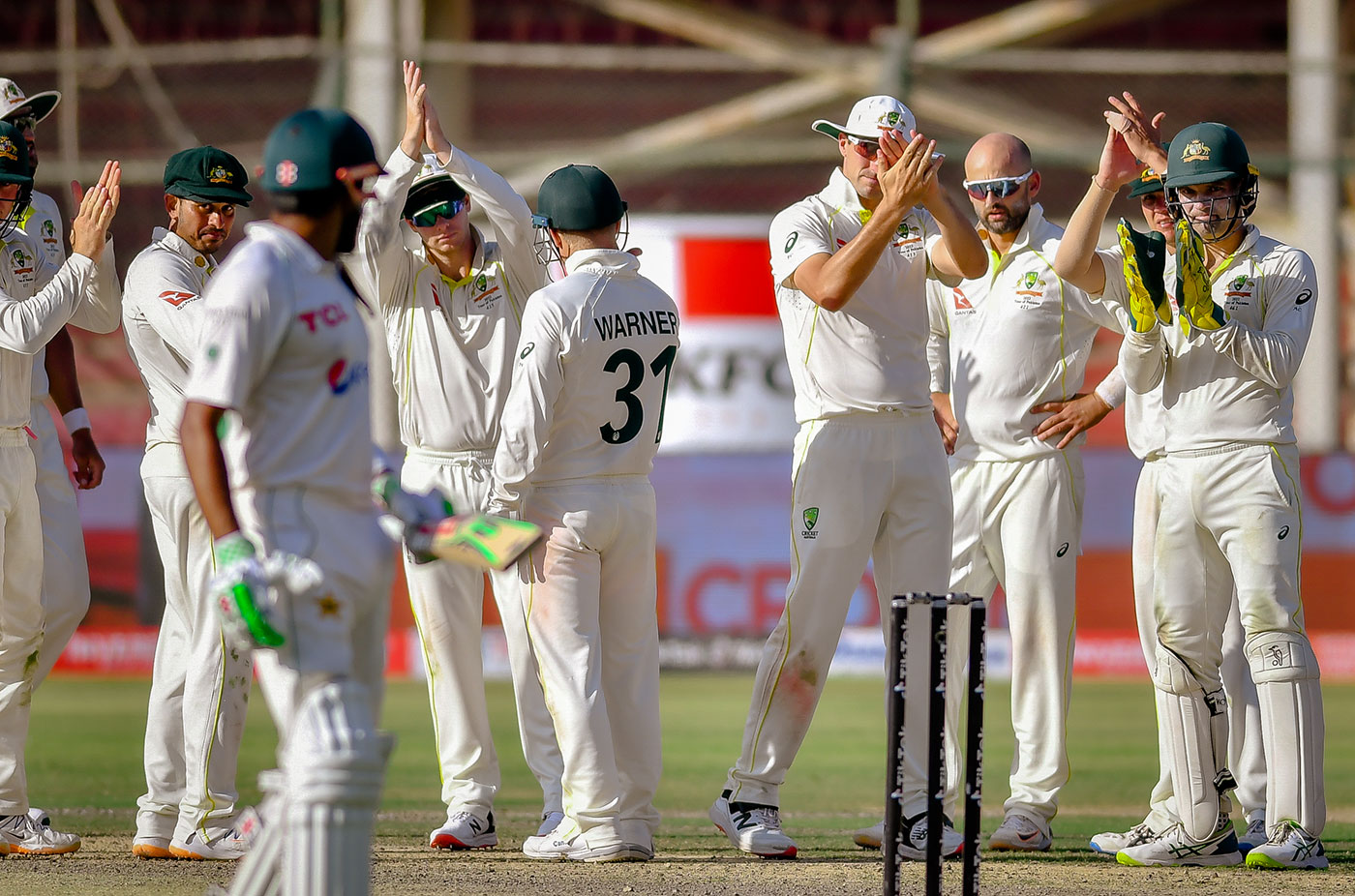 Karachi, March 16: It went down to the wire in the second Test between Pakistan and Australia in Karachi, but centuries from skipper Babar Azam and Mohammad Rizwan ensured that the hosts held on to a draw.

The action in the second Test went into the final over of the match, where Pakistan managed to draw the game with Mohammad Rizwan batting out till the end to see his team through.

Both teams walked away with four points each in the WTC standings and continue to occupy the top two spots.

Pakistan resumed the day’s play on 192/2, needing to chase 506 runs or survive 90 overs on the final day, and were on track with Babar Azam and Abdullah Shafique doing the job for them. Starting the day’s play with the new ball, Australian pacers bowled tightly, with Babar, in particular, struggling against Starc early on.

Shafique, at the other end, was steadily approaching his second Test century. The batters didn’t take long to settle in and continued to blunt the Australian pace attack. Cummins summoned his spinner in the first session to get him the breakthrough but both Nathan Lyon and Mitchell Swepson were unsuccessful.

However, on the stroke of lunch, the Australian pacers began to extract reverse swing as skipper Cummins got the better of the set batter Shafique on 96, breaking an epic 228-run second-wicket partnership. Shafique was undone by a Cummins’ outside-off delivery, which he edged through to the slips cordon, bringing an end to his valiant innings of 96 off 305 balls.

Fawad Alam, after a golden duck in the first innings, started cautiously and, along with skipper Babar, ensured Pakistan did not lose any more wickets going into lunch.

With still 252 runs to win the match, Pakistan’s resistance continued after the interval. Alam who had finally managed to score his first runs of the series, fell to a brilliant delivery from Cummins, as he nicked the ball straight into the wicketkeeper’s gloves. The wicket charged up the Aussies and Cummins started bowling aggressively, but nothing could stop the determined Babar, who surpassed his previous best Test score of 143 and shortly reached the milestone of 150 for the first time in his Test career.

Cummins deployed spinners at the stroke of tea and Lyon and Swepson started to trouble the batter. On 157, Babar survived a close leg-before-wicket call off Lyon as the ball was just clipping the leg stump, with the umpire’s verdict of not out being upheld by DRS. Shortly after, Babar was dropped on consecutive balls by Travis Head and Marnus Labuschagne, both fielding close to the wicket off Swepson.

With so much happening in the middle, Babar and Rizwan batted patiently and Pakistan, after losing only one wicket in the second session, went to tea on 310/4.

All results were possible going into the final session – Pakistan needed 196 runs to win or survive 36 overs to draw, while Australia needed six wickets for the win. The home side landed the first blow of the session as they came out swinging with 20 runs in the first two overs after the break. But Cummins persisted with his spinners, who managed to cut the flow of runs.

With the field relatively spread out, boundaries were in short supply for Pakistan. Babar and Rizwan batted sensibly and found the occasional boundary to keep the scoreboard ticking.

The required rate kept climbing as a result and it looked like it was heading for a draw before Lyon turned the game around. Babar looked set for a double hundred and was just four runs away when Lyon produced a bat-pad that Labuschagne gobbled up as short leg. And the off-spinner was on a hattrick when Faheem Ashraf edged the ball to Smith at slips.

Australia took the new ball, but kept Lyon operating at one end. And after Sajid Khan smashed him for two boundaries, Lyon had the last laugh with his wicket off the last ball.

At this point, Australia required three wickets and Pakistan needed to survive eight overs, as a victory for the home side was out of the equation at 414/7.

But, thankfully for Pakistan, Mohammad Rizwan and Nauman Ali batted through to stumps, the former getting to his Test century in the penultimate over of the game.