Srinagar, December 30: Players as well as fans Wednesday expressed anger with selection of J&K squad for Syed Mushtaq Ali Trophy, however, the selector said that team is entirely based on merit.

Some players alleged that they were not provided enough opportunities despite performing well in the few trial matches they played, while those selected despite failing were given chances.

“I scored a quick fifty in one match and was called back without getting dismissed. Then 30 plus in another. Afterwards, I wasn’t given many chances.” A player claimed, wishing not to be named.

He questioned the place of several players in the team, saying they constantly failed in trial matches but were still picked in the team.

“Some players who have been selected didn’t cross the 30-run mark in any match. A player even took 21 balls to score 9 runs in one of the matches. He is in the team and I am not even in the standbys.” He alleged.

There were questions about the exclusion of Manzoor Pandav, Jatin Wadhwan, Nasir Lone, Waseem Raza and others as well.

“This is absolute rubbish… You are not picking Jatin Wadhawan (who) averages at 36, Manzoor Pandav S/R 147 and gun allrounder Waseem Raza as they were your match winnners from past three years. U picked up a player from yesterday’s match who just scored a 21-ball 9 runs, (in) his place LOne Nasir would have been a good choice then.

You are there to entertain districts like Ladakh and many more darje kalyan (professional). Don’t understand the criteria and policy, this time around total shame on the selection process and policy?? Hope the team does well and stays in the elite A next year !!!,” wrote Zahoor Sofi, a former Ranji Trophy cricketer, on his Facebook wall.

To seek answers, KSW reached to Ashwinder Kaul, one of the selectors, who said,

“T20 is a different format and when selectors see players, they don’t just see who scored what, they have to look at how and in what circumstances one picked wickets and scored runs. It is not like we favour someone or something,”

“We, firstly, got very little time due to Covid-19 situation. So, when you have 80-90 boys playing matches in tandem, selectors have to see calmly who is playing according to the demands of T20 format.”

When asked what was the reason of not selecting one of the bowlers, Nehal Khajuria, who had picked 11 wickets in 4 matches, Kaul said,

“Among the bowlers we selected, 3 of them were a part of IPL teams recently. Could we have dropped any of them? Second thing is our team has done well in last few seasons, so we can not take risk of taking too many freshers straightaway,”

As questions have been raised about Jiyaad Magrey’s inclusion, the selector said he was picked on basis of his performance at Ranji and U-23 level. When asked, ‘what about the strike-rate?’, he replied,

“He is a very good-hitter of the ball. If you check he has scored many hundreds in junior-level cricket and in last year’s Ranji he also did well. Guys like Pundir (Shubham Pundir) Iqbal (Qamran Iqbal) and him (Jiyaad) are match-winners. If they play 5-6 overs in the middle, they can score in the 50s and 60s. Also while selecting the team, we need to keep in mind if the player is good on field, etc, just not the runs and wickets,” he said.

About the selection of a Ladakhi player in the team, he said, “We had to give Ladakh representation and the player we selected is good,”

Manzoor Pandav, who is considered as T20 specialist and has played last 2-3 seasons of Syed Mushtaq Ali Trophy, was also dropped from the squad.

Explaining his exclusion, Ashwinder Kaul said, “He played well last year against Delhi but he constantly failed in trial matches, so we had to drop him,”

While signing off, he said they don’t want to see players go through what cricketers of his generation have gone through,

“We are trying our best and picking players who can make a mark. Yes, there are players who we might have missed but there are one-days coming and we have them in our mind. Tell players to not get disappointed, it is my word that those deserving will not be dejected,” He concluded. 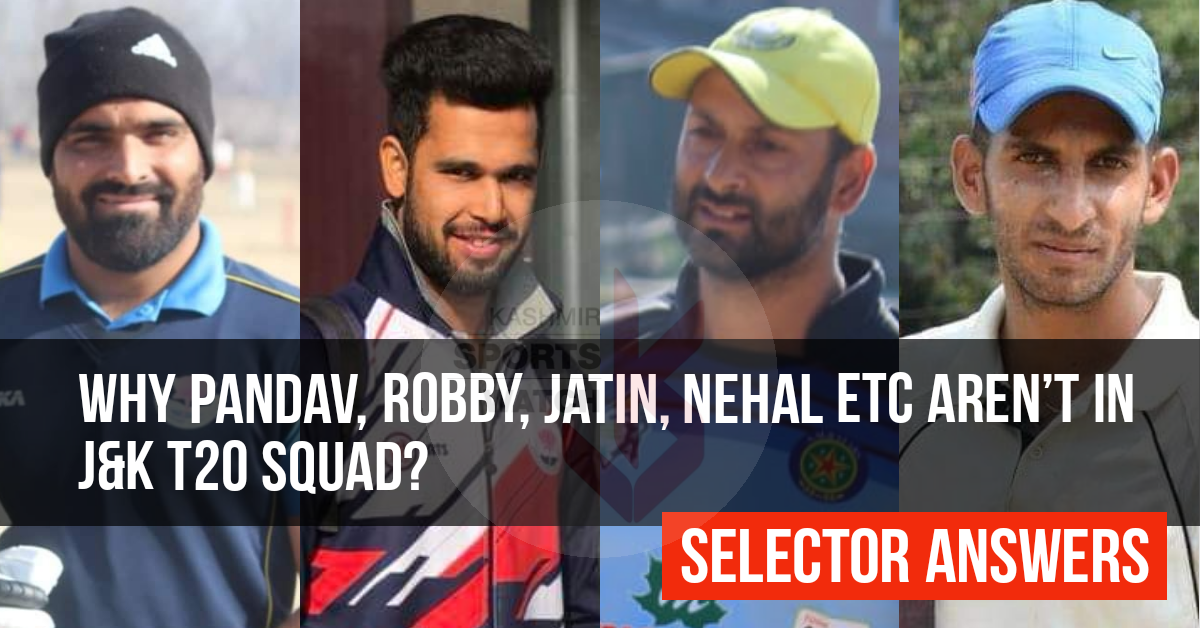