Players express disappointment as JKCA calls limited players for Vijay Hazare trials; selector says “only deserving ones” in the camp

Srinagar, November 19: A number of players have expressed disappointment as Jammu and Kashmir Cricket Association (JKCA) has called only a limited number of cricketers for the selection trials of the upcoming Vijay Hazare Trophy–50-over tournament.

The cricket association is currently holding a trial camp at Jammu, in which around thirty players are taking part. These players include those who played in the Syed Mushtaq Ali Trophy and a few limited additions.

The new JKCA administration led by two BJP spokespersons and a former cricketer this year decided to hold trials for a limited number of players for senior tournaments. For Syed Mushtaq Ali Trophy, a similar criteria was applied but it still had a healthy number of players in the trial camp from both Jammu and Kashmir regions.

However, this time around, JKCA has reduced the number manifold. Of course, from Kashmir region, as per reports, just one player has been added to those who were in the probables of Syed Mushtaq Ali Trophy.

“We work hard the whole year with just one aim: to impress selectors in the trials. But this year, we’re not even getting a chance in trials! We feel helpless and disappointed. Who do we speak to?,” another cricketer, requesting anonymity, said.

“Previous faction of JKCA was bizarre but the current one is no different. They promised transparency, etc after taking over, but where’s that?,” he questioned.

To seek answers, KSW reached out to Vidya Bhaskar, the chairman of the men’s senior selection committee, who defended the decision of calling a limited number of players for trials. Here are excerpts from the interview:

KSW: We heard only a limited number of players have been called to Vijay Hazare Trophy trial camp, why?

Selector: For this (senior tournaments), we can’t hold open trials, so we bring limited players. All those called to camp have played before and have been included on the basis of performance.

KSW: What criteria do you follow to include players in trials?

Selector: Tell me about a particular player.

KSW: This isn’t just about one player, there are several players (Named a senior cricketer)

Selector: (Giving a random graph of that player’s numbers)

KSW: Then what about the performance of players who are in the trials? What have they done?

Selector: They all have performed. Tell me about one player, who hasn’t?

KSW: We heard a player, who seems to be unheard of, from Kashmir has been included, but on what basis?

Selector: He is a good player. He has done well in domestic cricket.

Selector: Please listen to me first, he impressed us in the T20 trials held in Kashmir. That’s why he has been included. He spoke to me and told me he doesn’t want to be considered for T20s and would like to play one-days.

KSW: And what about others?

Selector: Those who have played before, we check their previous performance first and then assess them on what they did here in T20 trials. Our focus is only on players who are outstanding.

KSW: But what would say on the questions that are being raised on the selection?

Selector: It is obvious that those who are not selected will raise questions. They’ll keep saying they deserve and they should be included, etc.

Also, those who will play well in the U-25 tournament will also be considered for this. We will keep a close eye on U-25 performances. In short, we are focusing on around 40 probables of U-25 and 40 from seniors.

KSW: You said you’re focusing on players who appeared in Syed Mushtaq Ali Trophy trials but T20 and one-days are two different formats all-together. So, if a player played T20 trial matches, he would have obviously played according to the T20 format. Don’t you think it’s not right?

Selector: When you see a player, you do get an idea of what touch he is in, etc irrespective of the format. That’s what we looked at while doing selection.

KSW: There are several players who played junior-level cricket but are now not eligible for age-group cricket, how are they supposed to make it to senior level without the trials?

Selector: You see at the end of the day, only 15 players have to play; now we’re taking 20 due to Covid. So, those who are performing well at the senior level, we can’t drop them and those who don’t, we look for similar replacements.

KSW: Why have you just picked one additional player alongside Syed Mushtaq Ali probables from Kashmir region?

Selector: First, I can’t talk to you about it because it is concerned to the selector from Kashmir. So, you talk to him about it. But among all the players we saw, we picked the ones who we thought were good.

But from next season, if we were still in the  administration, we will start the selection process from March only. We will conduct tournaments from March as weather will also have improved in Kashmir and look out for best talent from all the regions.

KSW: Why are there just 10 to 13 players from Kashmir for Vijay Hazare Trophy trials among these 30-40?

Selector: We have 40 boys in our radar and about 27 to 28 are in the camp. We started this camp from the 17th (November) and the team has to leave on the 30th, so we can’t afford to call too many players (due to less time). So, we are holding this camp only for those who we think are good. 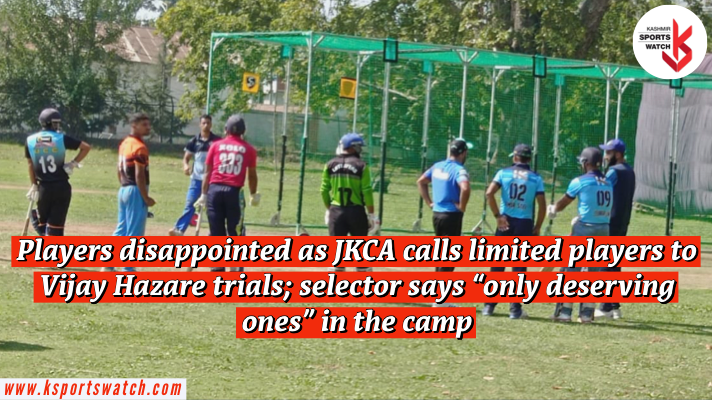