Srinagar, October 8: In the ongoing Khyber Milk Premier Football League 2021 only one match of Premier Division was played between Arco FC and Novelty FC, which was won by Arco FC by 3:1 goals.

The match was expected to be a high voltage encounter and it lived upto the expectations of the spectators, who had thronged the venue in thousands. Players from both the teams displayed high quality and high speed football enthralling the huge crowd.

As the match started, forwards of both the teams started attacking other’s goalpost to seize an early initiative. Arco Fc succeeded in their effort when Ishfaq Teli scored the first goal for his team in 13th minute of the play. Leading by a goal, lifted the confidence of the Arco FC and they continued to attack opposite goalpost with higher frequency, in 18th minute Waseem Haroon of Arco FC doubled the lead, the score line was 2:0 in favour of Arco FC in the first half.

As the second half began, Novelty FC players were desperate to score and they launched several attacks on the opposite goalpost and in 79th Minute of the play a penalty kick was awarded in favour of Novelty Fc . Alok of Novelty FC without any mistake converted it into a goal . The rest of the play was high speed football from both the teams as Novelty FC tried their best to score an equaliser while Arco Fc were trying to double the lead. When it looked like the match would end, Owais Ahmad of Arco FC managed to score the in 88th minute and virtually sealed the fate of the match. When the referee blew the final whistle the score line read 3-1 in favour of Arco FC. 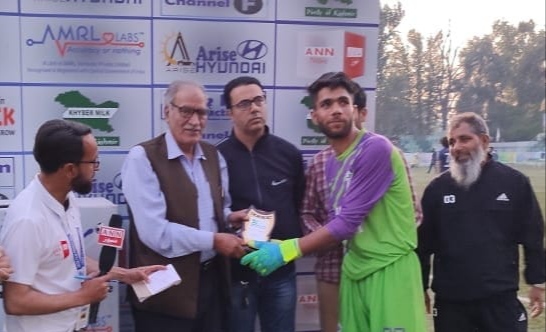