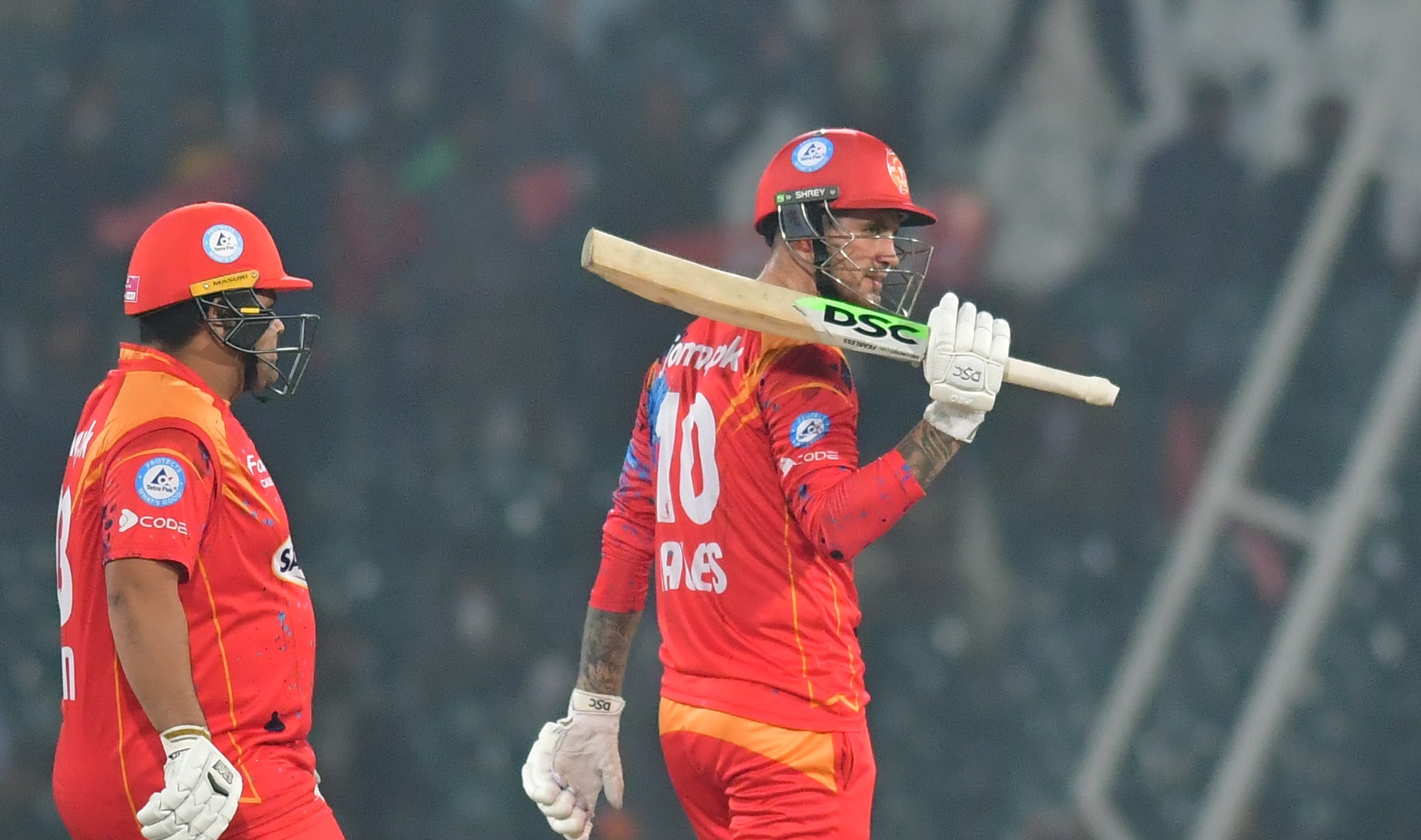 Lahore, Febuary 25: Two time former champions Islamabad United won the Eliminator 1 in a dramatic and thrilling fashion to keep alive their hopes of a third HBL Pakistan Super League title as 2017 champions Peshawar Zalmi were knocked out in another action-packed night (Thursday) of cricket at the headquarters of Pakistan cricket Gaddafi Stadium, Lahore. Zalmi paid a heavy price for a missed stumping and a dropped chance against Alex Hales inside the first three overs delivered by Zalmi’s new recruit Ali Majid in United’s 170-run chase.

Hales who had returned to represent United for the playoffs made full use of the opportunities provided to him by Zalmi with a brilliant 62 off 49 (six fours, three sixes).

The English batter was finally undone by a sensational yorker by Salman Irshad who also removed Asif Ali (7) with a beautifully disguised slow yorker.

Asif was dismissed with the score at 119 in the 16th over. His departure left United needing 51 off the last 28 balls.

Azam Khan (28 off 22, one four, two sixes) and (player of the match) Faheem Ashraf (19 not out, two fours, one six, one for 15 in three overs with the ball) brought United to the brink of victory with some big hits which left United needing 10 off the final six balls bowled by Benny Howell.

Azam was dismissed off the first ball of the final over in what was another twist in the tale of the thriller, however Liam Dawson settled the game in United’s favour with a massive six over mid-wicket and a lap sweep off the following delivery for four as United chased the score down with three balls to spare.

Salman finished with three wickets for 31 but Zalmi skipper Wahab Riaz had a forgettable night with figures of 4-0-52-0.

United will now take on Lahore Qalandars tomorrow night in the HBL PSL 7 Eliminator 2, the winner will proceed to play the tournament final against Multan Sultans on Sunday.

Batting first Zalmi’s seasoned batting pair of Kamran Akmal and Shoaib Malik hit 50s to help their side muster 169 for five. After the early loss of the big-hitters Mohammad Haris (12) and Yasir Khan (8), Kamran took over the run scoring.

The wicketkeeper-batter scored 58 off 39 balls (seven fours, two sixes). This was the first fifty of the season for the Zalmi veteran who has been one of the most prolific run-getters in HBL PSL history.

Kamran was dismissed by Shadab after a 40-run alliance with Malik. Kamran was replaced by Hussain Talat who joined Malik in a quickfire 56-run partnership off only 26 balls.

Hussain contributed 28 off 15 (five fours). Malik cut loose after the loss of Kamran and after a series of big shots reached his third half-century of the season. The Zalmi batting linchpin was dismissed for 55 (43 balls, four fours, two sixes) on the penultimate ball of the innings.

During his innings Malik reached the 400-run mark in the ongoing season, his tally at the end of the innings read 401 runs at 44.55, strike-rate 137.32. Hasan Ali who made a return to the United side after an injury lay-off took three wickets for 30.

“My plan is to hit the hard length always and I try and stick to that as this is the plan I have with captain and coach. My plan while batting was to not lose a wicket and to take the game till the very end as that would make things easy for us and we are happy that it worked out for us, even tomorrow you will see the United of old play,” Player of the match Faheem Ashraf said.