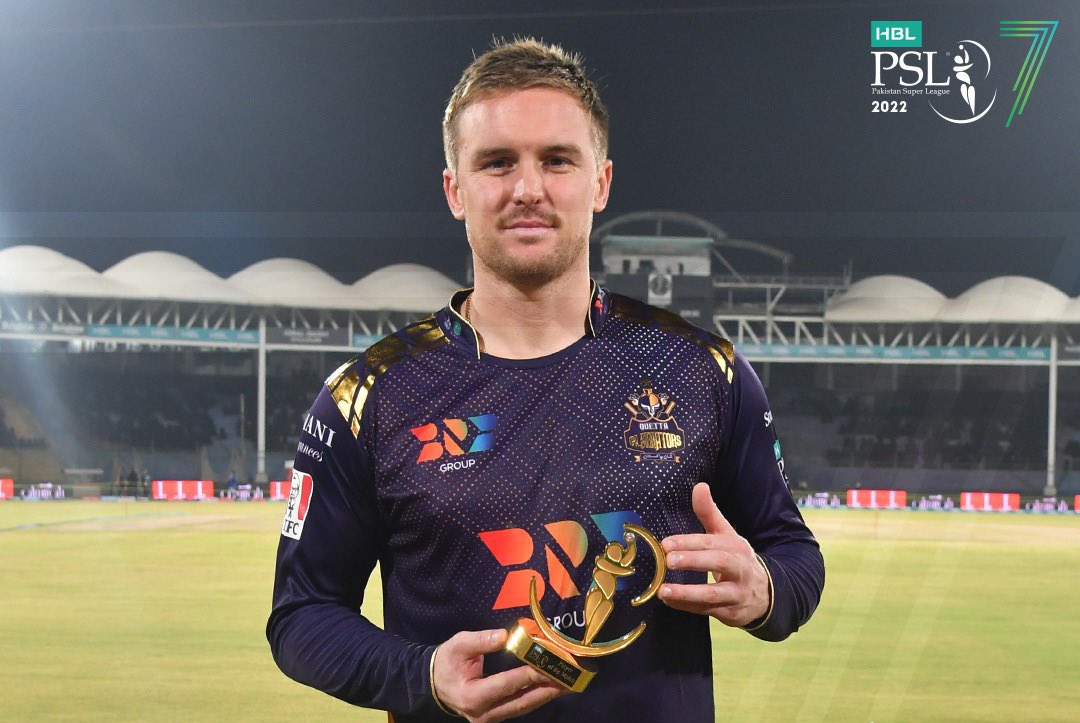 Karachi, Febuary 7: Jason Roy announced his arrival in the HBL Pakistan Super League 2022 with a whirlwind maiden century that steered Quetta Gladiators to an impressive seven wickets victory over Lahore Qalandars in the 15th and last match of the Karachi-leg on Monday.

Roy raced to his first 50 from 20 balls, while his second 50 came off 29 balls as the Gladiators achieved the 205-target with three balls to spare. This was the second highest successful run-chase in the history of the tournament.

Roy’s 116 was the first century by a Quetta Gladiators batter and 11th overall in the history of the event. Kamran Akmal (three), Sharjeel Khan (two), Colin Ingram, Usman Khawaja, Cameron Delport, Fakhar Zaman and Chris Lynn are the other batters to reach the three figures in this highly entertaining, exciting but challenging league. This was also the second fastest 100 after Rilee Rossouw’s 43-ball century.

“I think it was one of my best innings and have an incredibly good feeling. The partnership with James Vince was even better,” Jason Roy saud.

“It was important that we won this game and take the momentum to Lahore with two wins in five matches. We were always confident and very happy to have won this game with the second highest run-chase,” he said.

Roy was quick to show his intentions when his first scoring shot was a six off Shaheen Shah Afridi. Such was his dominance that before his fellow opener Ahsan Ali could score his first run of the second ball, the Englishman had already sprinted to 29 off 13 balls in his side’s 34-0 in 2.2 overs.

When Roy departed at the total of 167, Quetta Gladiators required 38 runs off 26 balls, which they scored for the additional loss of Iftikhar Ahmed.

James Vince returned undefeated on 49, a 38-ball innings that included five fours. Together with Roy, Vince added 96 runs for the second wicket from 62 balls, while his fourth wicket unbroken 33-run fourth stand with Mohammad Nawaz (25 not out, 12 balls, 1×4, 2×6) came from 17 balls.

Earlier, put into bat, Lahore Qalandars put a solid batting display to score 204 for five with all the explosive batters amongst runs.

Fakhar Zaman top-scored with a 45-ball 70 with three fours and three sixes to take his tally of tournament runs to 356 in five matches with a strike-rate of over 173.

Harry Brook’s 17-ball 41 not out included four fours and two sixes, while David Wiese struck a four and two sixes in a nine-ball 22 as the two batters added 55 runs for the unfinished sixth wicket off 20 balls.

This was Quetta Gladiators’ second win in five matches, while it was Qalandars’ second loss in as many matches.

With all sides now having played five matches each, defending champions Multan Sultans are on top of the table with 10 points. They are followed by Islamabad United, Lahore Qalandars (six points apiece), Quetta Gladiators, Peshawar Zalmi (four points each) and Karachi Kings (winless).

The tournament will now resume in Lahore on Thursday, 10 February with Multan Sultans taking on Peshawar Zalmi.