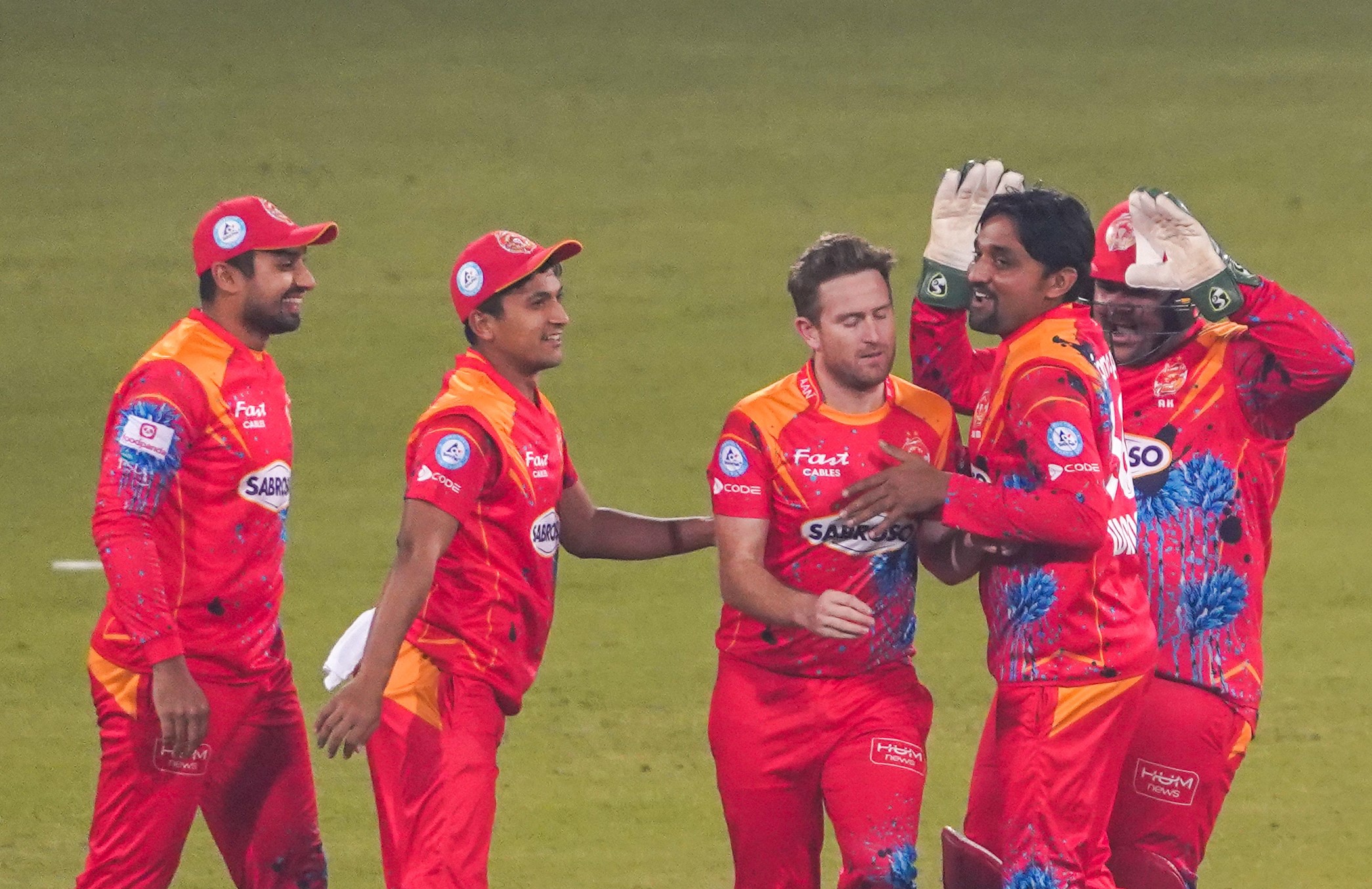 Lahore, Febuary 14: Karachi Kings have crashed out of the race for HBL Pakistan Super League 7 play-offs spot after losing their seventh successive match of the season in an incredibly dramatic game against Islamabad United on Monday night at the Gaddafi Stadium, Lahore.

After a heroic fight back by Imad Wasim and Qasim Akram (108-run sixth-wicket stand) the 2020 champions needed a mere eight runs (191 target) off the final over bowled by pacer Waqas Maqsood.

Despite conceding a boundary off the second ball, the experienced left-armer Waqas kept his nerves as he dismissed Imad and Jordan Thompson before running out Chris Jordan off the last ball as Kings lost by one-run, finishing at 190 for eight.

Imad played a sensational 55-run inning (six fours and three sixes) but got out with his side at the cusp of a much needed win. Kings’ 19-year-old recruit Qasim who recently captained Pakistan U19 in the ICC U19 Men’s World Cup 2022 fought with great courage and took full advantage of three dropped chances in his unbeaten 51 off 26 (six fours, one six).

Kings had scored 47 off the previous three overs having started the 17th needing 55 runs to win but Waqas’ incredible final over extinguished their hopes of staying in the hunt for a play-off berth. Waqas finished with three wickets for 34 from his four overs.

United have now consolidated their third position on the points table with eight points from seven games (four wins, three defeats). Kings remain winless and at the bottom of the six-team table, they are the first team to lose seven successive HBL PSL matches in a single season.

Earlier, player of the match Asif Ali took two wickets with his part-time off-spin in a completely unfamiliar role after contributing a dazzling 28 off 11 (one four, three sixes) with the bat to spearhead his side’s success.

Put into bat, United built their 191 for seven total on the basis of small but meaningful contributions throughout the innings. Captain Shadab Khan top-scored with 34 off 26 balls (three fours, one six), opener Alex Hales scored 25.

The real impetus to the innings was provided by the big-hitting trio of Azam Khan, Asif and Faheem Ashraf. Azam hit two fours and a six in his 22 off 14 balls before his run out.

All-rounder Faheem provided the finish United were looking for with a blazing 29 not out off 10 balls. The left-hander hit three fours and two sixes. Both Asif and Faheem tore into Umaid Asif who after bowling his first two overs for a mere eight runs went for 41 off his last two.

Imad was the pick of the Kings bowlers with two for 30 in four overs while left-arm pacer Mir Hamza who was making his debut for the Kings and featuring in his first HBL PSL match in three years took one wicket for 31 in his four.

United overcame the loss of Shadab and pacer Zeeshan Zameer due to injuries as Asif produced a remarkable performance with the ball as a fill-in bowler. Zeeshan limped out due to a back injury a ball after dismissing Kings mainstay Babar Azam (13) with a searing delivery.

Shadab could not bowl after suffering a groin injury while fielding at the start of the innings. Asif made the match winning breakthrough on the first ball he bowled as Sharjeel Khan was caught in the deep after an enterprising 44 off 29 balls (four fours, three sixes). He also dismissed Mohammad Nabi (3) in the same over (10th of the innings) as United seemed to be cruising home before the Imad-Qasim partnership gave them an almighty scare.

“I played to my strength while batting, I hadn’t played to my strength in previous games so I am happy I performed today. I had the responsibility with the ball after two bowlers had broken down, I simply had to do it as it was my responsibility. Waqas has the ability and the experience to deliver at crucial times so we knew he could do the job for us in the crunch final over,” player of the match Asif Ali said.