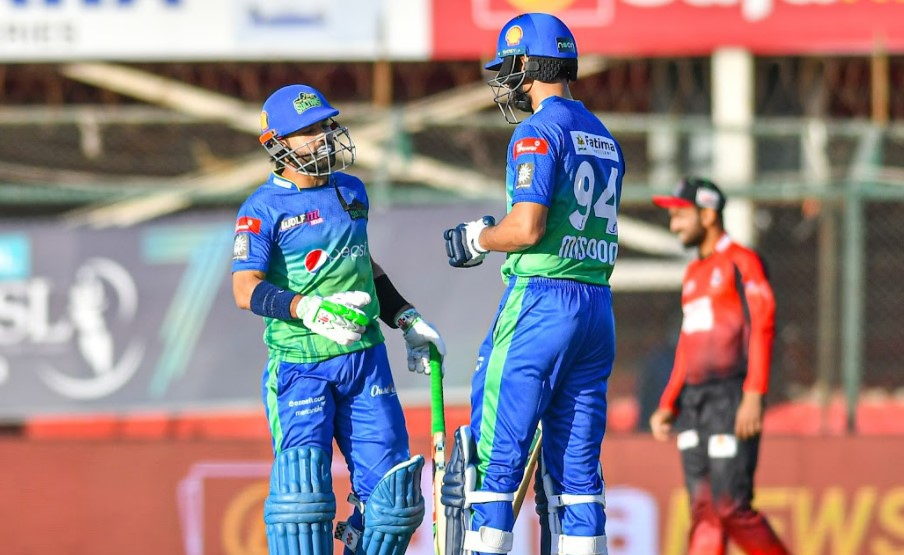 Karachi, January 29: A dominating 150-run stand between openers Shan Masood and Mohammad Rizwan followed by a scintillating finish by Khushdil Shah, in which he struck Haris Rauf for three fours and a six on the first four balls of the final over, handed Multan Sultans a five-wicket win over Lahore Qalandars.

This is Multan’s second win in as many matches after they defeated Karachi Kings on the opening night of Pakistan Super League 2022.

Shan and Rizwan made 83 off 50 (14 fours and a six) and 42-ball 69 (six fours and three sixes) respectively and put together the highest partnership for any wicket for Multan to set the platform to surmount a mammoth target of 207.

Khushdil who arrived at the crease on the edge of the last over when Shaheen Afridi dismissed Tim David on the last ball of the penultimate over, spanked three fours and a six to chase down 16 off the last over with two balls spare.

That Lahore Qalandars had set such a high target was due to Fakhar Zaman’s blistering 76 that he scored a strike rate of over 217. The left-hander smashed 11 fours and two sixes and added 89 runs for the first wicket with Abdullah Shafiq in 8.3 overs.

Kamran Ghulam built on the solid start, scoring 43 off 31 balls.

That the match went down the wire was because of the extraordinary penultimate over that Shaheen bowled. The winner of the ICC Sir Garfield Sobers trophy picked up two wickets and gave away only one run to leave 16 for the last over.

” It was important to not look at the scoreboard and respect the class bowling attack that Lahore Qalandars have. Once we got in, we made sure we don’t face many dot balls, stick to our strengths, and keep attacking. And, I think we did that very well,” Shan Masood said.

“It is quite a task [to be an opening partner of Mohammad Rizwan]. He makes you run to the max, you are always out of breath, but I think his understanding of the game and where he is at with his game, that is impeccable and it makes life easier for someone like me,” he said.

“He is the best player in the world right now when it comes to T20 cricket or maybe even all formats. He makes life easier for you. I started a bit slow and he took the onus on him. He took the attack to the opposition and it just made my life easy. Once I got going, I tried to carry the momentum. He is one of my favourite partners. We get along well on and off the field, and I hope we can continue performing for MS together,” Shan Masood added.