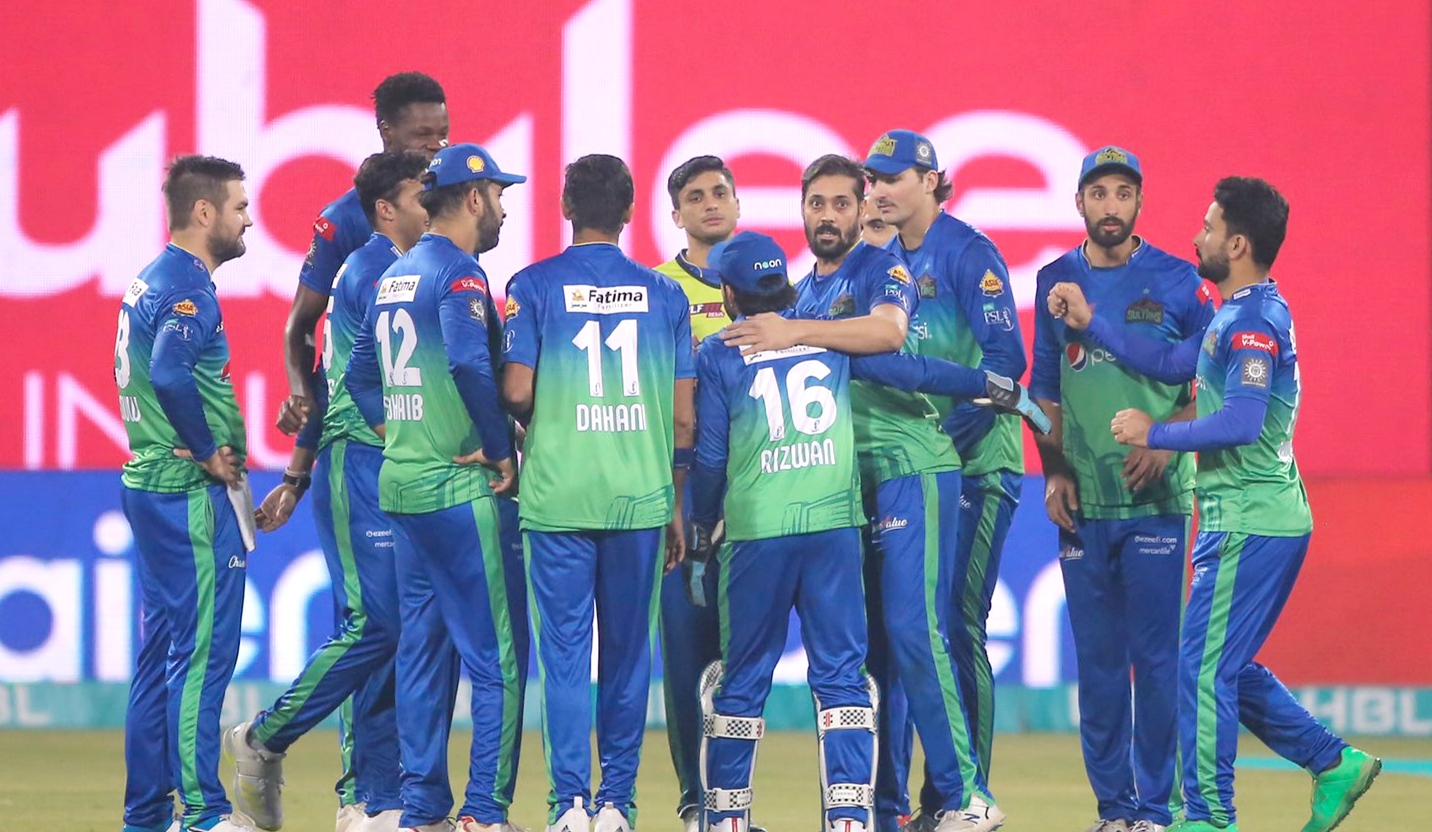 Lahore, Febuary 11: Defending champions Multan Sultans have become the first team to enter the HBL Pakistan Super League 7 play-offs. The Mohammad Rizwan-led side continued their dream run in the seventh edition of the prestigious T20 league with a 42-run victory against Peshawar Zalmi in the 16th fixture of the tournament, the first of the season to be played at the Gaddafi Stadium, Lahore on Thursday.

Put into bat, Sultans got off to a fine start with the in-form Shan Masood (player of the match) celebrating his call-up to the Pakistan Test squad for the series against Australia with 68 off 49 balls (eight fours, one six). Shan and Mohammad Rizwan added 98 for the first-wicket partnership. Rizwan contributed 34 off as many balls.

The big-hitting Tim David provided impetus to the Sultans innings with 34 off 18 balls, he hit three sixes to take his tournament sixes tally to 18 – the highest amongst all batters for the HBL PSL 7 season. Wahab Riaz took his first two wickets of the ongoing season conceding 34 runs in four overs, Salman Irshad also took two along with Saqib Mahmood who bowled a fine final over conceding a mere seven runs for two wickets.

Muzarabani made early inroads by dismissing openers Kamran Akmal (4) and Haider Ali (1) in his opening over. Zalmi received a big blow when Liam Livingstone (24) fell to Abbas Afridi. The England T20 specialist was making his first appearance for Zalmi in the ongoing season.

The seasoned Shoaib Malik top-scored with 44 (31 balls, four fours, two sixes) but his dismissal in the 15th over pegged back Zalmi. Ben Cutting hit some big blows in his 23 off 11 but fell to Khushdil Shah in the 18th over to bring curtains to the chase.

Zalmi were bowled out for 140 in 19.3 overs with Khushdil calming his 12th wicket of the season courtesy a sensational caught and bowled. Muzarabani took three wickets for 18 while Khushdil finished with three for 26 in 3.3 overs. Shahnawaz Dahani took two wickets.

Sultans are at the top of the points table with six wins out of six matches (12 points). Zalmi have now lost four out of their six matches and continue to languish at the fifth-spot above the winless Karachi Kings.

“As a player I just try and follow the process. I have been a bit clearer while batting and all I am trying to do is to take it a ball at a time and react to it. I am just following the processes and I am pleased that it is working out well for me and helping me contribute to team’s success.” player of the match Shan Masood said.