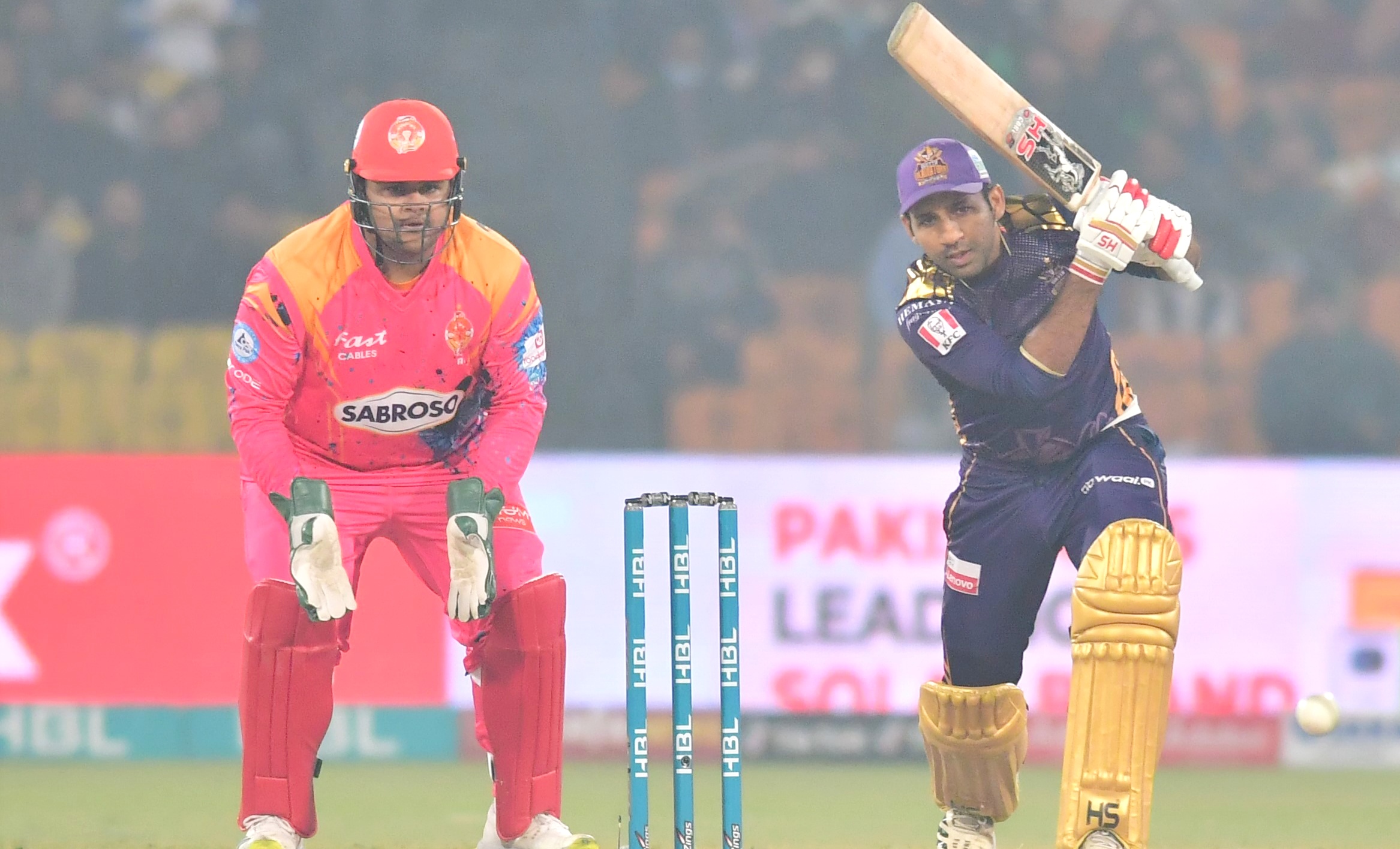 Lahore, Febuary 12: Quetta Gladiators delivered a second successive 200-plus chase as they defeated Islamabad United by five wickets in a last over thriller at the Gaddafi Stadium, Lahore in the 18th fixture of the HBL Pakistan Super League 7- PSL 2022 on Saturday night. Gladiators captain Sarfaraz Ahmed (player of the match) took his side home with an unbeaten 50-run contribution.

Set an imposing 200-run target, Gladiators got off to a blazing start as Jason Roy and Ahsan Ali provided an 88-run start with Roy falling on the last ball of the eighth over of the chase. Roy was dropped at 25 by Wasim Jnr, the right-hander didn’t take a backward step and continued the onslaught in his sensational 54 off 27 balls (10 fours, one six) before he was bowled by Shadab.

Ahsan followed in the next over with Dawson pinning him lbw for 30 off 23 balls (three fours, one six).

James Vince (29 off 22) kept Gladiators in the hunt against the mounting required rate as Shadab, the leading wicket-taker of the ongoing season, produced another outstanding spell.

Shadab had the last laugh as he dismissed Vince in the same over (14th) after conceding a six and four. Shadab also accounted for Iftikhar Ahmed to take his season’s wicket tally to 17.

Umar Akmal who made his first appearance for the season stroked a stunning 23 off eight balls (three sixes) to initiate the Gladiators comeback. Umar added 52 off 20 balls with Sarfaraz for the match winning fifth-wicket partnership.

The duo turned the game on its head by taking 17 runs from the 18th over bowled by Hasan Ali when Gladiators needed 44 off the last 18 balls. They then took 19 off the penultimate over bowled by Wasim Jnr who dismissed Umar in the same over.

Sarfaraz finished the game for his side with two balls to spare as he scored back-to-back boundaries off Hasan ending with an incredible unbeaten 50 off 32 balls (three fours, two sixes).

Gladiators have now won three out of their six matches just like United who also have six points from as many matches. United though occupy the third spot ahead of Gladiators fourth on the basis of a superior net run-rate.

United who were put into bat had an innings of two halves. After an explosive start courtesy Alex Hales’ 62 off 38 balls (four fours, four sixes), United had to endure a middle-order collapse. Hales who played some typically aggressive shots added 48 for the first-wicket with Rahmanullah Gurbaz (19) and 52 for the second-wicket with captain Shadab Khan (12).

From 100 for one in the 11th over United crashed to 109 for six in the 13th as Gladiators’ veteran all-rounder Shahid Afridi took two wickets in one over which also included Hales’ run out.

Afridi then ran out Azam Khan (0) with a direct hit from mid-wicket as his inspirational burst brought the Gaddafi Stadium crowd to its feet.

However, Gladiators’ joy was short-lived as United all-rounder Faheem Ashraf produced a scintillating 55-run innings (28 balls, five fours, four sixes) adding 78 for the seventh-wicket with Liam Dawson (13) to bring his side back in the hunt.

After Faheem and Dawson perished on successive balls of the final over bowled by James Faulkner, Mohammad Wasim Jnr hit two massive sixes off the final two balls of the innings to take United to the highest total of the Lahore-leg so far as the 2016 and 2018 champions finished their 20 overs at 199 for eight.

Afridi with two for 27 was the pick of the Gladiators bowlers who in an otherwise shoddy bowling performance conceded 20 extras including as many as 16 wides.

“We lost back-to-back wickets and had some dot balls yet we knew that if we stay at the wicket we will win. We were provided a great start by Jason Roy and Ahsan Ali and James Vince also made a valuable contribution. Umar Akmal changed the game with his blazing innings. We took a chance by handing Shahid Afridi the new ball as we knew that their batters try and attack from the start and that would give us a chance,” said Player of the match Sarfaraz Ahmed.