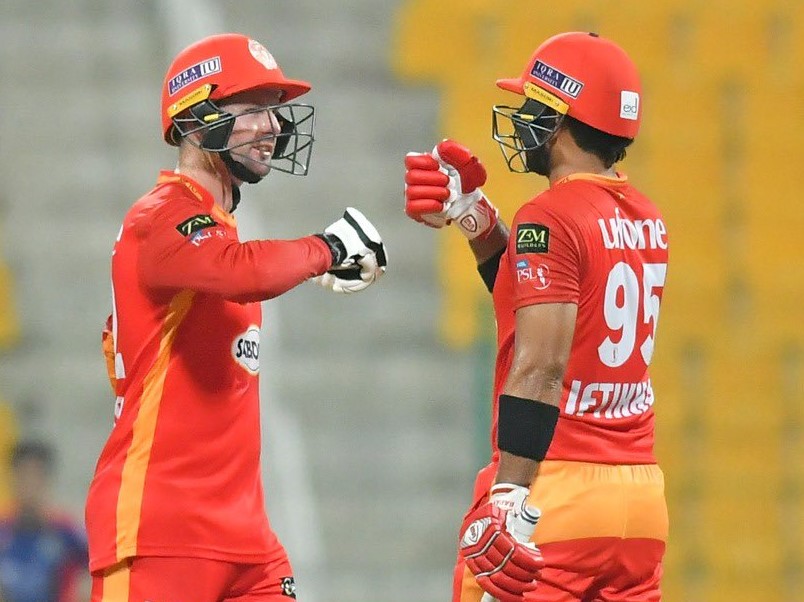 Abu Dhabi, June 15: A record 150-run unbeaten partnership for the third wicket between Colin Munro and Iftikhar Ahmed guided Islamabad United to a comfortable eight-wicket win over Karachi Kings in the 22nd match of the HBL PSL 6 at the Sheikh Zayed Cricket Stadium on Monday.

Chasing 191 to win, United got off to a shaky start as they lost Usman Khawaja (12 off 16, one four) and debutant Muhammad Akhlaq (one off two) in the batting powerplay with 41 runs on the board.

Iftikhar, coming to bat at number four, joined Munro, and both batsmen played shots all around the ground. They were provided two lifelines each. Iftikhar was dropped by Imad Wasim off his own bowling in the ninth over on seven and then in the 16th over on 46.

Munro was dropped on 34 in the 12th over by Waqas Maqsood off Abbas Afridi. The left-handed batsman took full advantage of the dropped chance as he struck Abbas for two consecutive fours later in the same over.

Munro was given another chance when he was caught of the full toss bowled by Thisara Perera’s which later was adjudicated above waist height, and Perera went for 23 runs in the over.

Munro brought up his fifth HBL PSL half-century in 39 balls. He returned undefeated on 88 off 56, hitting 12 fours and two sixes. His partner Iftikhar scored a 39-ball 71, laced with five fours and as many sixes.

Earlier, after being put into bat, half-centuries from Babar and Najibullah lifted Kings to 190 for four.

The opening pair of Sharjeel Khan and Babar contributed 37 runs for the first wicket, with left-handed Sharjeel scoring 25 off 17, (one four and two sixes), before being dismissed by Akif Javed in the fifth over.

Babar kept the scoreboard moving and struck two fours and a six off Ali Khan’s first over – sixth of the innings – and collected 17 runs of the over to end the batting powerplay on a high note at 56 for one.

The left-handed Najibullah joined Babar after the dismissal of Martin Guptill and the pair did the repairing work by adding 117 off 69 for the third wicket partnership.

Babar, who started his HBL PSL career for Islamabad United in 2016, struck his 19th half-century of the tournament. He struck splendid shots around the dial in his 81 off 54 (seven fours and three sixes).

Afghanistan international Najibullah scored an unbeaten 42-ball 71 in an innings embellished with five fours and four sixes. He brought up his maiden half-century in the 18th over, where he collected 21 runs off Wasim’s over, hitting the right-arm pacer for two sixes and a four.

Islamabad United now lead the points table with 12 points from eight matches, while title-defenders Karachi Kings are on the fourth spot with six points from seven outings.