PSL2 final will be played in Lahore, says Najam Sethi

The final of second edition of Pakistan Super League (PSL2) will be played in Lahore, PSL Chairman Najam Sethi announced on Wednesday while addressing the drafts ceremony in Dubai.

Drafts for the second season of the Pakistan Super League (PSL2) kicks off in Dubai Sports City, with the Lahore Qalandars choosing first.

After a successful first edition of the PSL, the drafts process marks the beginning of PSL2.

The Qalanders will be followed by the Karachi Kings, Peshawar Zalmi, Quetta Gladiators and Islamabad United in player selection.

The Lahore Qalandars pick ex-New Zealand Captain Brendan McCullum in the first pick, as they had already announced him as captain of the team in place of Azhar Ali.

In the second bid, Karachi Kings pick Chris Gayle. The star all rounder was earlier part of Lahore Qalandars in the first edition of PSL.

In the second round of drafts for the platinum category, Lahore Qalandars pick Sunil Narine while Karachi Kings settle for Kieronn Pollard.

Runner up team in the first edition, Quetta Gladiators, stick with their earlier choice as they pick T20 captain Sarfraz Ahmed to lead the team.

Shane Watson, who couldn’t complete the first edition due to an injury, rejoins Islamabad United.

Earlier, PSL Chairman Najam Sethi speaking to DawnNews had said that the drafts would be even more star-studded this year as compared to the previous year.

Although most team retained players from the first season of the PSL, the retention policy would be reviewed next year in order to give new players chance to be part of the drafts, he said. 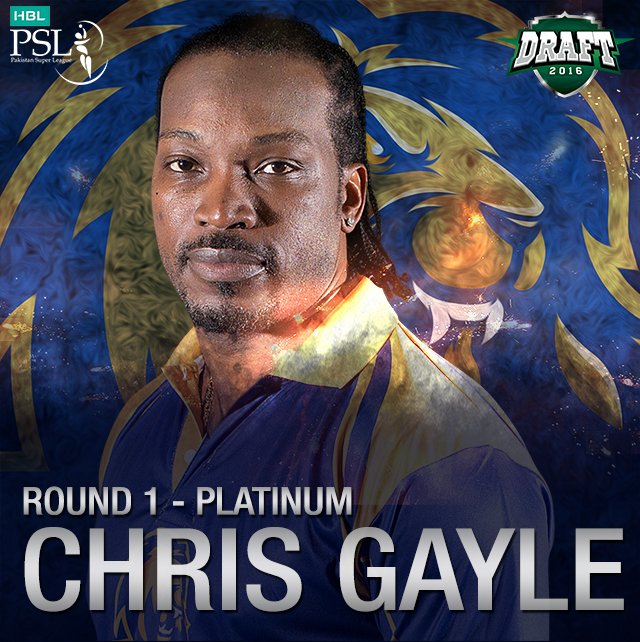