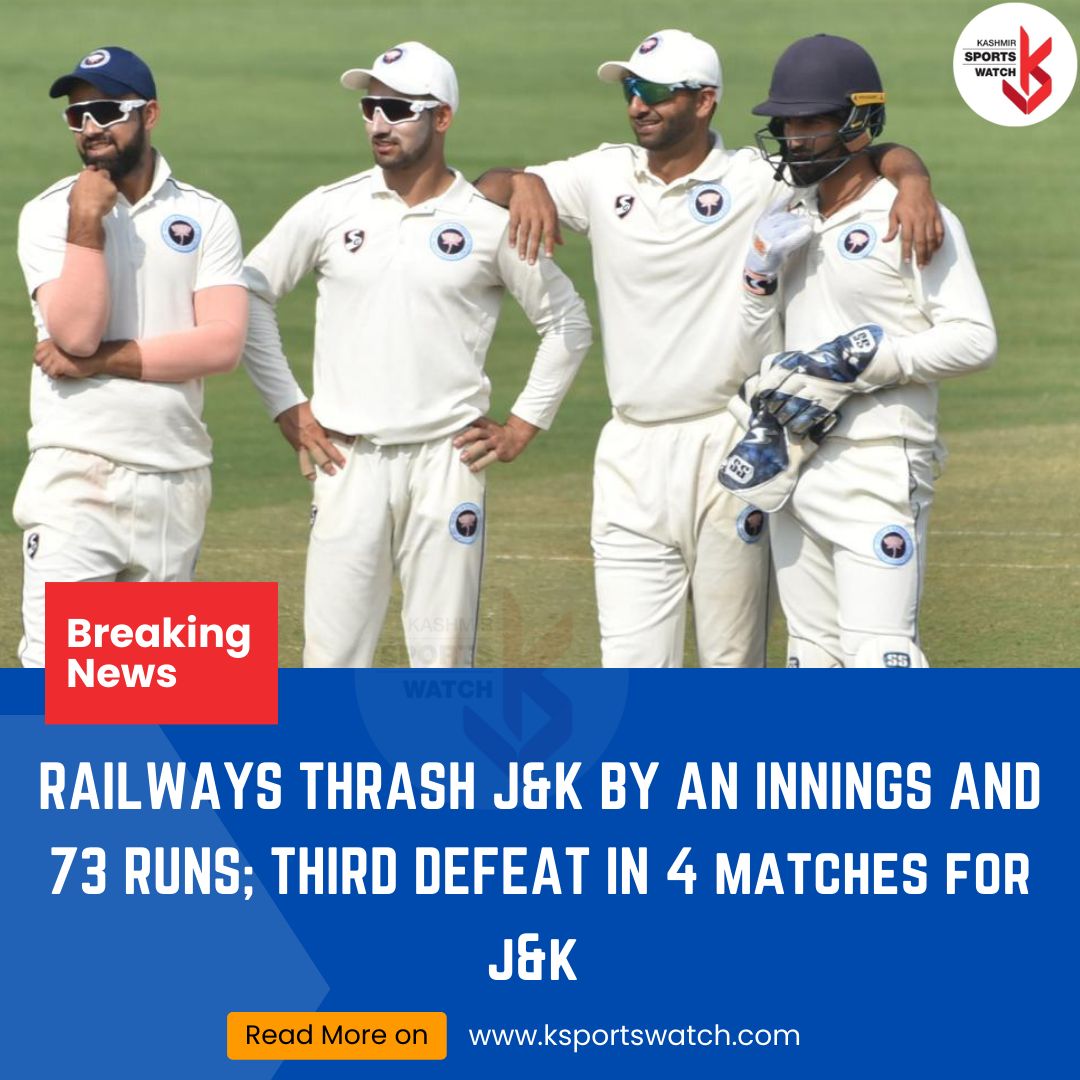 Srinagar: J&K senior cricket team batting once again failed as they suffered another innings defeat in the ongoing Ranji Trophy tournament against Railways at Lalbhai Contractor Stadium, Surat on Thursday.
Following-on J&K batting failed in second inning also as the whole team got all out for 193 run total on the third day of the play, handing Railways an innings and 73 runs win.
It is third big defeat for J&K in this seasons Ranji Trophy tournament out of four matches played. They have been able to win only one match so far , that was against Vidarbha.
Earlier third days play started from J&K resuming their second innings from 5/0 , trailing Railways first inning total by 261 runs. The whole side got bundled out for 193 run total. Fazil Rashid with 53 was highest scorer for J&K while as Auqib Nabi scored 31. Vivrant Sharma who was brought by Sunrisers Hyderabad for 2.60 crores recently scored 29. From Railways side, Aakash Pandey once again ran through J&K batting taking four wickets in second innings. He completed the match haul of 10 wickets. MR Raut and Shivam Choudhary took two wickets each.
Railways won match by an innings and 73 runs. Mohammad Saif for his magnificent unbeaten knock of 233 was awarded man of the match.
Earlier thanks to Mohammad Saif’s brilliant unbeaten knock of 233 runs Railways scored 427 runs in first innings.Saif remained not out on magnificent 233 from 293 balls. He hit 30 fours and three sixes. Next best score in Railways innings was 32 by Vivek Singh. For J&K, Abid Mushtaq took four wickets while as Umar took three. Auqib Nabi took two wickets while as Mohammad Tahir took one.
In reply, J&K got all out for 161 run total in first innings to hand Railways first innings lead of 266. They were forced to follow-on.
Suryansh Raina with 48 was highest scorer for J&K while as Musaif Aijaz scored 39. Aakash Pandey took six wickets for Railways while as MR Raut took two.
In the match which saw none of the other batters were able to reach even 55 run mark with 53 being next best score, Mohammad Saif of Railways displayed highest level of brilliance. There are very few examples of such an inning in entire Ranji Trophy history and it was pure class displayed by Saif.
After playing four matches in this seasons Ranji Trophy tournament, J&K stand at sixth place at points table on Elite Group D with mere six points. They suffered innings defeat against Madhya Pradesh in first match followed by nine wicket defeat against Gujarat in second match. In the the third match, J&K beat Vidarbha by 42 runs.
J&K are next scheduled to play against Punjab from January 10 in Mohali.
Brief Score:
1st Innings
Railways : 427/10 ( Mohammad Saif 233* , Vivek 32, Abid 4-wkts)
J&K: 161/10 (Suryansh 48, Musaif 39, Aakash 6-wkts)
2nd Innings
J&K: 193/10 ( Fazil 53, Auqib 31, Aakash 4-wkts)
Result: Railways win by an inning & 73 runs.