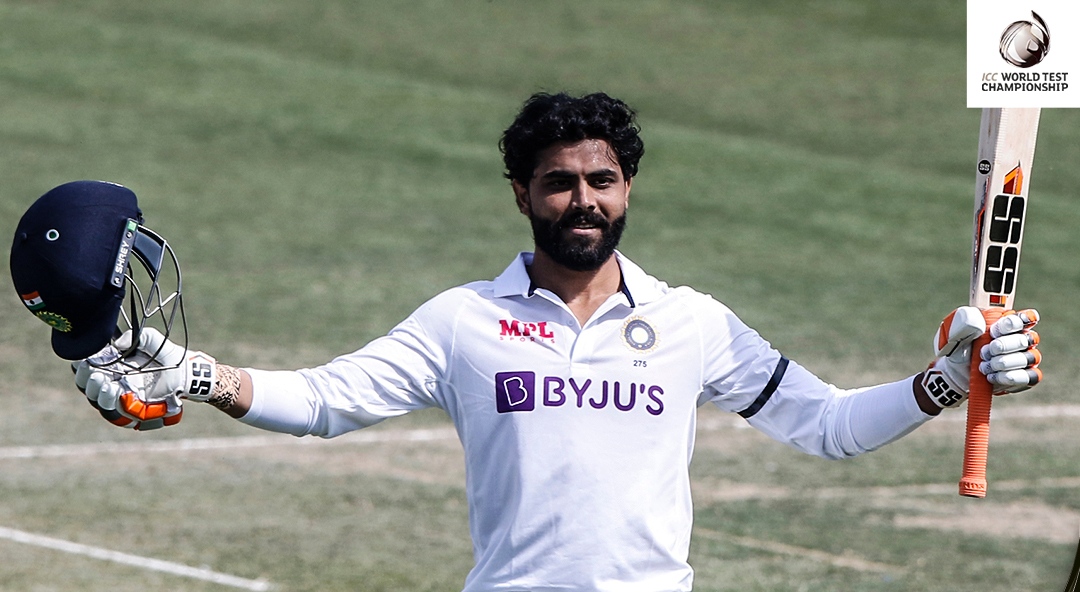 Mohali, March 5: A major contribution from Ravindra Jadeja (175*) in the first innings, the hosts declared on 574/8 and are in total control as Sri Lanka were reduced to 108/4 at the end of the day.

India began Day 2 on 357/6 with Ravindra Jadeja (45) and R Ashwin (10) at the crease. Jadeja soon brought up his 18th Test fifty with a four through sweeper cover, sparking his trademark sword celebration. Little happened to ruffle the two batters as they continued fattening the partnership with careful rotation of strike and occasional boundaries. Ashwin too soon found his rhythm and started emulating Jadeja’s aggressive streak. He soon brought up his 12th Test half-century; the duo’s stand also crossing the 100-run mark.

The fledgling partnership was finally broken by Suranga Lakmal when he bounced out Ashwin, who miscued a pull, top-edging one to the keeper on 61. Just before Lunch was called, Jadeja brought up his second Test hundred as India closed the morning session on 468/7.

A stutter to start the second session – Jayant Yadav perished in the second over after the break on 2 – did not stop Jadeja’s onslaught. In one Embuldeniya over, he smashed a six and two fours to take India past 500. A confident six over mid-off brought up Jadeja’s 150 and he soon pushed past Kapil Dev’s record of the highest score by an Indian at No.7 in men’s Tests. With Jadeja at 175* and his stand with Mohammad Shami nearly 100, India declared their innings on 574/8.

Starting their innings after an early tea call, Sri Lanka opened with captain Dimuth Karunaratne and Lahiru Thirimanne. With two left-handers on the crease, India deployed spinners early. Although Ashwin was brought into the attack right away, the left-handed batters displayed disciplined batting from the start. They were confident in leaving the balls and were going after the upper-length deliveries to score runs.

Despite the spinners getting grip and turn from the surface, the Sri Lankan batters were fortunate against deliveries that kept low or struck them on the pads. But not for long, as Ashwin came up with the first breakthrough, dismissing Thirimanne leg before wicket on 17 (60). As new batter Pathum Nissanka joined captain Karunaratne in the middle, skipper Rohit Sharma quickly brought Mohammed Shami into the attack.

Nissanka was all at sea when Ashwin bowled to him, but he soon got a breather as Ashwin had been up for a long spell. But the problems started for Sri Lanka when Ravindra Jadeja came into the attack. Jadeja in his second delivery, caught captain Dimuth on the backfoot, dismissing him for 28.

Nissanka, who looked in trouble, was shown the way to the pavilion by Bumrah but the siren cut short the celebrations, as he survived due to a no-ball. But Bumrah was up for a brilliant spell and he got the reward in his very next over as he trapped the experienced Angelo Mathews (22) in front of the wicket, reducing Sri Lanka to 96/3.

Another change of bowling brought in another wicket for India, as Ashwin struck. Dhananjaya de Silva perished to his pre-meditated sweep shot, getting dismissed on 1. However, Pathum Nissanka and Charith Asalanka managed to end the day without losing any more wickets. Sri Lanka ended day two on 108/4, trailing by 466 runs.