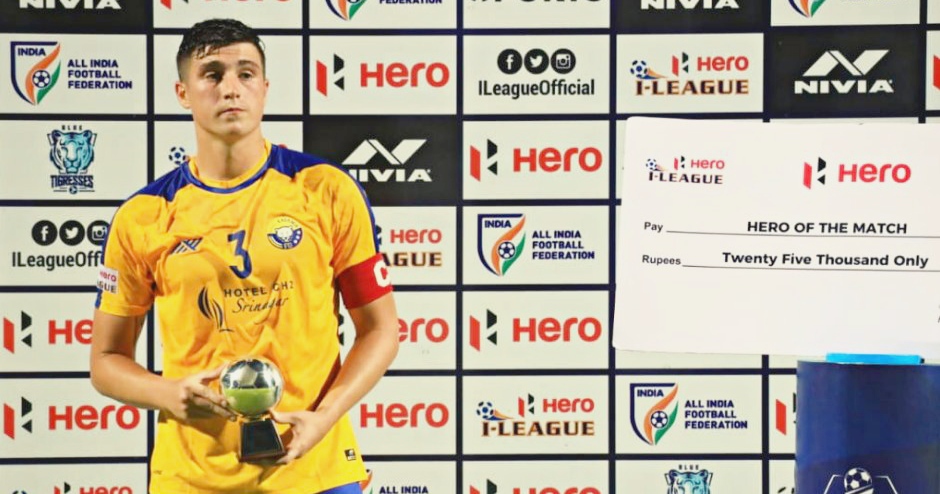 Kalyani: Real Kashmir FC and Kenkre FC played out an engaging 1-1 draw in Hero I-League 2021-22 at Kalyani Stadium on Friday. It was midfielder Vijay Nagappan (45+1′) who opened the scoring for Kenkre FC to give the club an early lead. Real Kashmir dominated possession and captain Mason Robertson (66′) converted an opportunity in the second half to bring his team back on level terms. Both teams fought till the final whistle to get the winner, but were unable to do so and the match ended in a 1-1 draw.

The match started with Real Kashmir dominating and making dangerous moves inside Kenkre FC’s half. In the 4th minute, Tiago Adan entered inside the box from the center, but his shot was saved by Kenkre goalkeeper Tenzin. In the 8th minute, Kenkre’s Jishnu Balakrishnan received the ball from a corner and took a shot from a wide range. But the shot went wide off the post. A few minutes later, Jishnu had another crack at the goal from a free kick, but it went above the goalpost.

In the 22nd minute, the Snow Leopards received a free kick opportunity which was taken by Mason Robertson. But his shot was well defended by the Kenkre wall. Three minutes later, Fran Gonzales received a cross from the right inside the box, but the glorious opportunity was missed as Kenkre’s defence made another calm save. Real Kashmir maintained a stronghold in Kenkre FC’s half for the next 10 minutes, but the club from Mumbai maintained a tight defence.

In the 40th minute, Malem Meitei tried to go for a shot from inside the box, but Kenkre defenders blocked his hit and the danger was averted again. In the 43rd minute, Kenkre received a corner and Vijay Nagappan’s cross went straight to Kiran Pandhare inside the box. But his header went just wide off the mark. A counter-attacking move from Kenkre FC towards the stroke of half time saw Vijay Nagappan clearing Real Kashmir’s defense and hitting a right-footed shot towards the bottom-right corner to give his team a 1-0 lead.

Real Kashmir started with an attacking mindset in the second half, receiving a corner in the 48th minute. But the resulting attack was fizzled out with Kenkre FC clearing the danger straight away. Five minutes later, Fran Gonzales received an opportunity inside the box with Surchandra Singh’s lobbed free-kick. But the resulting shot went towards the byline and was safely collected by Kenkre FC.

Real Kashmir Head Coach David Robertson brought on fresh legs in the 65th minute replacing Meitei with Ragav Gupta. The change in formation worked for Real Kashmir as Mason Robertson scored a goal in the next minute as Ragav gave a brilliant assistant to his captain inside the 6-yard-box, which Robertson collected with ease and put it past the nets. In the 73rd minute, Kenkre FC goalkeeper Tenzin made a tremendous straight shot from Jongoh Park. Tenzin remained calm and caught the ball safely.

Five minutes later, Robertson received another opportunity as the ball landed on his feet after Prasad made a cross inside the box. But the Real Kashmir skipper hit it above the goalpost, missing the glorious opportunity.

In the 87th minute, Real Kashmir received a corner. Tiago grabbed the ball just in front of the goal, but Kenkre FC defender Arvind made a tremendous save just ahead of the goal line, saving the match for his team. Robertson continued to make threatening penetration inside Kenkre FC’s box but was unable to find the perfect finish, and Kenkre FC succeeded in holding Real Kashmir to earn one point.