Refusal by J&K Bank to allow its players for I-League, leave Real Kashmir FC in fix 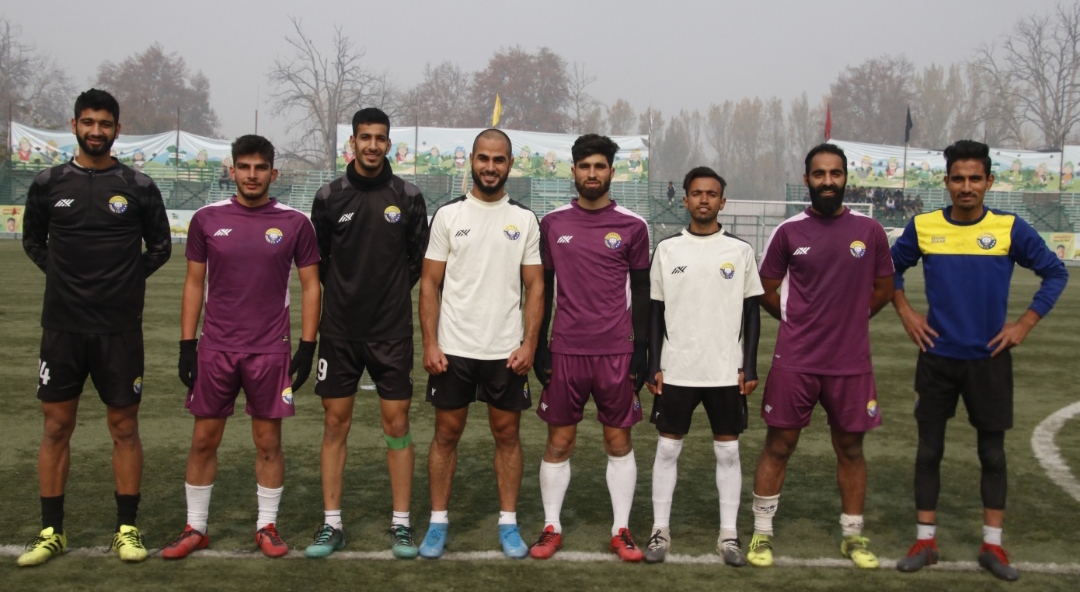 Srinagar, December 1: The refusal by J&K Bank to allow its footballers owing to thier own football committements for I-League this season has left Real Kashmir FC in a fix due to low availability of top level talent in J&K.

Since its inception , like any other professional team, Real Kashmir FC has been building a strong side for I-League competitions but also used to involve local J&K players in the squad as well. Amoung those players some turned into instant stars owing to their talent excelleing at highest level that came there way as Real Kashmir FC provided them the platform. Infact Danish Farooq after impressing everyone on I-League, was roped in by Bengaluru FC for Indian Super League this season. His departure created a big void in Real Kashmir FC already as he has been the most consistent local performer for the team.

Apart from Danish, Real Kashmir FC had involved players like Farhan Ganai, Adnan and others mosty from J&K Bank which is considered best available talent pool in J&K. They had on number of occasions also offered contract to Aakif Reshi but the footballer always rejected the offer. Owing to his rejection the striker is yet to play in I-League.

Meanwhile , Real Kashmir FC has been including other local players in its squad in order to groom them for the future but amoung the players who can be regular in playing eleven very less talent is available. Currently only veteran star like Shahnawaz Bashir and other footballer from Jammu province are the regular in the playing eleven during its ongoing campaign of IFA Shield in Kolkatta.

It is learnt that Real Kashmir had also offered contract to other local players in Kashmir who were playing for it in Premier Division League organised by DFA Srinagar. However , due to huge salary demand from couple of those players, contract didn’t mature. Now those players are sitting idle in their homes after having missed to be part of Real Kashmir.

Before Real Kashmir FC, there used to be one or two J&K players playing in I-League, amoung them only Mehraj ud Din Wadoo and Ishfaq Ahmed used to be regular. Others even failed to impress or didn’t got chance to play in the middle.

Since the inception of Real Kashmir FC, we are now seeing more and more players from J&K part of the club in I-League. Though only few amoung them have been regular but every now and then the players get chance to play in the middle with eye on future.

Other aspect of all this is that Real Kashmir FC is not Government team and doesn’t need to involve local players. But being based in Kashmir , it has moral responsibility of doing that which it has been doing nicely. The J&K Goverment after Real Kashmir FC became first ever team from J&K to win second division I-League and qualify for I-League had issued grant of rupees six crores for the club for three years. Out of that they are yet to receive final grant of rupees two crores.

The seasonal budget of the team is of more than five crores with the involvement of foreign and top Indian talent. If team goes into the I-League with majority of local players , then they would be relegated as all other teams build their teams strongly and on big budget.

“We have been left without any choice. It is no hidden fact that the best of the lot in J&K is with J&K Bank. They are proven players who can directly get into playing eleven. This year Bank owing to its own commitments refused to allow its players for the I-League. Despite that we involved the best available players ,” said a official of Real Kashmir FC.

“I-League is top league of India. Like any other professional league around the World , its teams are also built professionally. If Real Kashmir FC doesn’t build strong side then it would be relegated ,” he said.

About the criticism levied on club about lack of local players in the squad , the official said, ” To some extent we can accept criticism as we were unable to get players released from J&K Bank on deputation while others were unable to negotiate contract terms. However , we have very loyal base who support us in every high and low. They are well aware about the malicious intent and who is behind this social media campaign that has no base. Some persons inorder to fulfill their personal agendas are using name of Real Kashmir”.

“We have taken five local players this time and if they can come upto the level they will also be part of playing eleven. It takes time for players to come upto this level. RKFC cann’t manufacture players overnight,” Official said.

The official also questioned about why no other club from Kashmir has qualified into I-League.

“If these people question Real Kashmir FC for not including majority of J&K players in playing eleven. We have a question for them. Why no other club from J&K is part of Second Division I-League, leave out winning it and qualifying into main I-League. If we care about local talent, then why foriegn and outside J&K players are allowed to play in Kashmir local leagues. If our local teams in order to compete in local leagues need, foreign and outside players, then imagine level of competition in I-League,” official said.

“We are sure if any of them is able to somehow get into I-League , they will not involve even single local player, after looking at how they use foreign players in local leagues, ” official added.