A Test match that swung constantly across the four days came to a fittingly dramatic conclusion on Sunday as an unbeaten 17-run stand from the last-wicket pair of Kemar Roach (30) and Jayden Seales (2) took West Indies to victory.

The pair came together at 151/9 with Pakistan seemingly on the brink of a famous win after an incredible catch from Mohammad Rizwan to remove Jomel Warrican (6). Running at full tilt to the fine leg boundary, Rizwan stretched out and dove to pouch a top-edged pull shot, handing Hasan Ali (3/37) his third wicket and bringing out rookie No.11 Seales with the match on the line.

The pressure did not prove too much for the 19-year-old, who resolutely saw out 13 deliveries as his veteran partner at the other end got the job done. It capped off a remarkable match for Seales, who earlier became the youngest West Indies bowler to claim a Test five-wicket

For Pakistan, and Rizwan in particular, it proved a case of so close yet so far. With West Indies six runs away from victory, Hasan drew a thick outside edge from Roach that went underneath the glove of a diving Rizwan to his right. Cruelly for bowler and keeper alike, the edge raced all the way to the ropes for four. Three balls later Roach brought the match to a close with a far more convincing shot, driving Hasan through cover-point to spark cheers of jubilation from the dressing room.

That edge that raced away for four was the third life Roach enjoyed in an enthralling final session.

Starting the day at 160/5 in their second innings, Pakistan’s hopes suffered a bitter blow when Faheem Ashraf fell early for 20, edging Roach (3/30) behind. It took a special catch from Joshua Da Silva to complete the dismissal, with the keeper diving full stretch to his left to snare it with one hand in front of first slip.

Things got significantly worse two overs later as Kyle Mayers (1/33) drew a leading edge from Babar Azam that landed in the hands of Jason Holder at first slip, removing the Pakistan skipper for 55. From there, Seales (5/55) made quick work of the tail, accounting for Yasir Shah (4) and Shaheen Afridi (0) before ending a quickfire 28 off 26 from Hasan.

With that Seales claimed his maiden Test five-wicket haul, becoming the youngest West Indies player to ever do so, breaking the record set by a 20-year-old Alf Valentine in 1950. Seales is currently 19 years and 340 days old.

West Indies’ chase got off to a rocky start as Afridi (4/50) cut a swathe through their top order, accounting for the top three to leave them 16/3 inside the first eight overs.

A 68-run stand between Roston Chase and Jermaine Blackwood got West Indies back on track but the hosts stumbled again when Ashraf (2/29) removed Chase (22) and Mayers (0) across two overs to leave them at 92/5.

At the other end, Blackwood played with ease enjoyed by few this Test, racing to his half-century in just 69 deliveries, hitting 10 boundaries along the way. His fall for 55, caught by a diving Imran Butt in the slips off the bowling of Hasan, opened the door for the thrilling finish we wound up with.

Holder (16) fell soon after Blackwood to leave West Indies 114/7, tilting the match Pakistan’s way before a 28-run stand between Da Silva and Roach tilted it back. Da Silva’s fall to Afridi for 13 swung it back again, with Roach left to finish off the job with the tail.

Still needing 26 runs to win, he only managed nine alongside Warrican before finishing the match off with Seales.

The two sides next meet on Friday in the second and final Test of the series. ( Courtesy ICC) 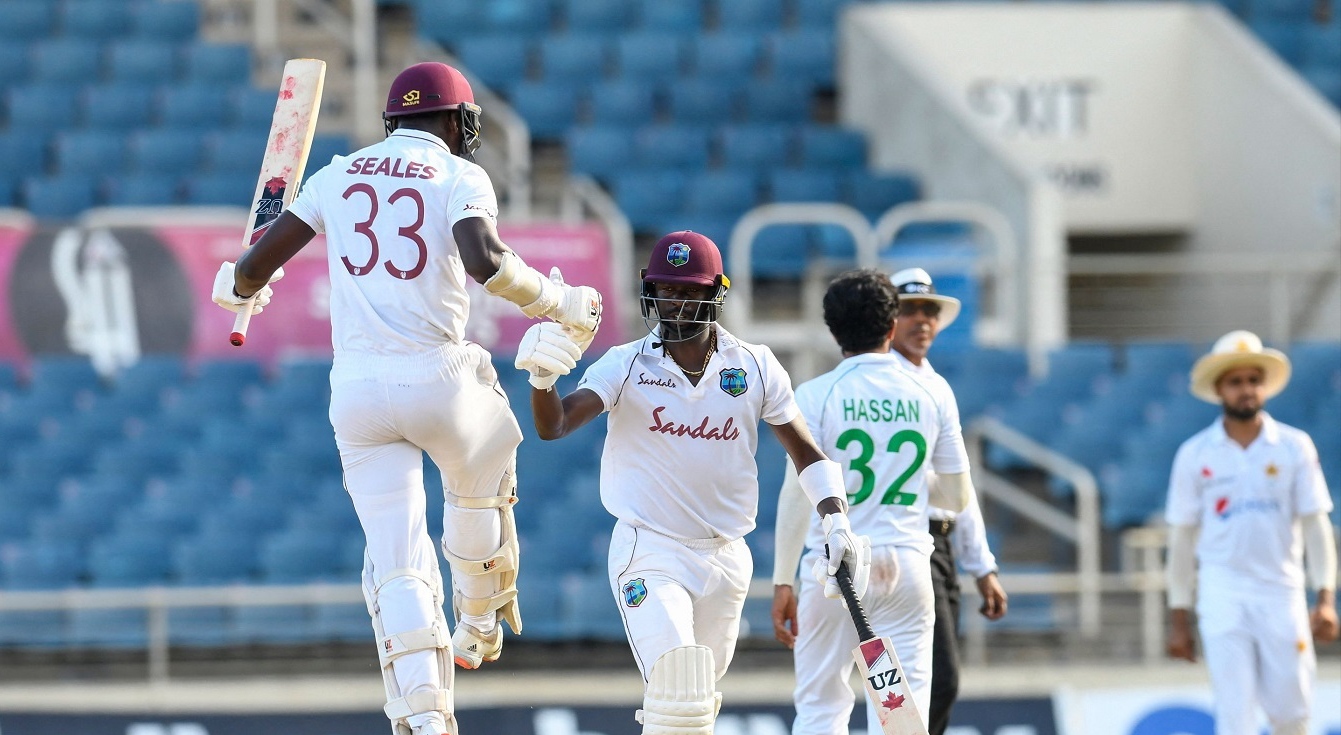