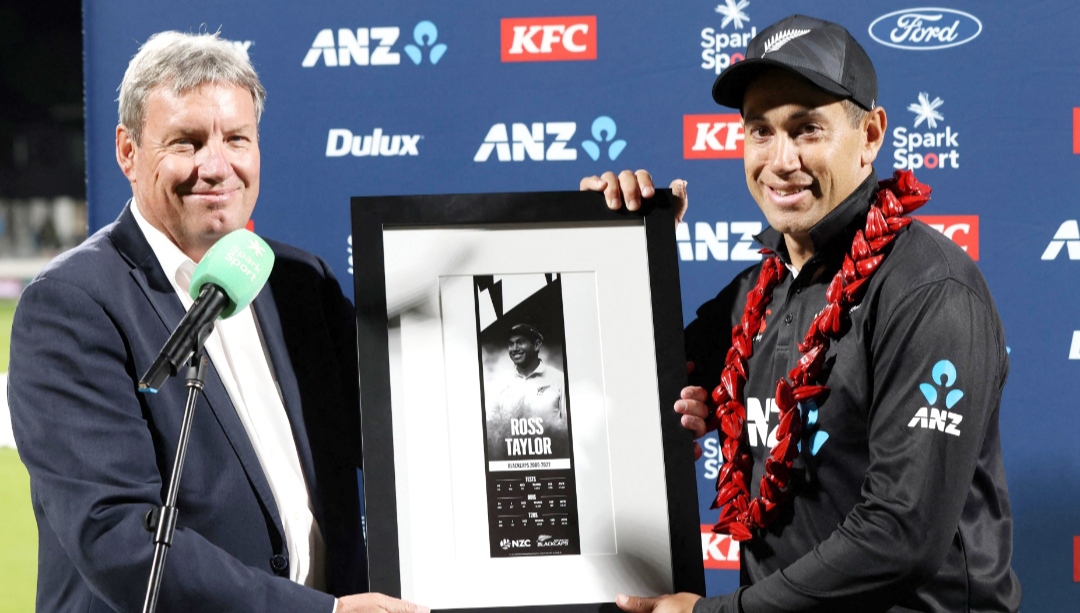 Playing his final and 450th international match against Netherlands in his hometown Hamilton, an emotional Ross Taylor could not hold back the tears as he entered the arena in New Zealand colours for one last time.

Taylor walked in to bat when New Zealand were cruising along at 215-2 and scored 14 off 16 balls in his final appearance, getting out caught and bowled to Logan van Beek in an attempt to push the scoring-rate further. New Zealand eventually finished at 333/8, a score that helped them secure a 115-run win to complete a 3-0 series whitewash.

From winning the inaugural ICC World Test Championship to scoring the highest score by a New Zealand batter in Australia, Taylor was a part of several glorious moments for New Zealand and retired as the country’s most prolific run-getter across formats – 18,199 runs at a highly impressive average of 42.72. Taylor played 112 Tests, 236 ODIs, and 102 T20Is making him the only record holder of a unique achievement of being the only cricketer to make 100 appearances in each of the three international formats.

Here are the top five moments of his career where he made headlines for his awe-inspiring batting performances that won the Blackcaps great laurels over the years.

A dependable force in the New Zealand camp, Taylor’s search for an ICC title for his country ended when they defeated India in the ICC World Test Championship Final in Southampton in June 2021. Taylor remained unbeaten at 47 in a run-chase of 139, completing the task with a trademark flick in the final session of the Test.

Taylor’s finest performance in Tests came against Australia in 2015 at the WACA, Perth, when he smashed the highest score by a New Zealand player Down Under – 290 in 374 balls. The memorable innings, which spanned over nine hours featured 43 fours and helped the Black Caps save the Test after Australia scored a towering 559/9d in the first innings.

Taylor’s ODI best of 181* came during a challenging run-chase of 336 against a formidable England side in Dunedin in 2018. New Zealand stumbled at the beginning, with openers Martin Guptill and Colin Munro both registering ducks. But Taylor’s determination on the day ensured New Zealand scampered home safely with three balls to spare. His brisk knock was laced with 17 fours and six sixes.

With the ICC ODI World Cup 2019 Final on the line, New Zealand’s talismanic Taylor rose to the occasion once again, starring with a match-defining 74 off 90 deliveries in the first semi-final against India at Old Trafford, Manchester. Taylor’s exploits with the bat helped his side set a competitive total of 239, before New Zealand’s bowling restricted India to 221 to romp into their second straight World Cup final.

On his 27th birthday, Taylor smashed an unbeaten 131 against Pakistan in the ICC Men’s ODI World Cup 2011 Group fixture in Pallekele. A Player of the Match worthy performance, Taylor unleashed carnage to help New Zealand add 92 runs in the final five overs to take their total to 302/7, laying the foundation of a comprehensive 110-run win. An innings best remembered for his fiery assault on Shoaib Akhtar was another reminder of his skills as a supreme all-round batter.