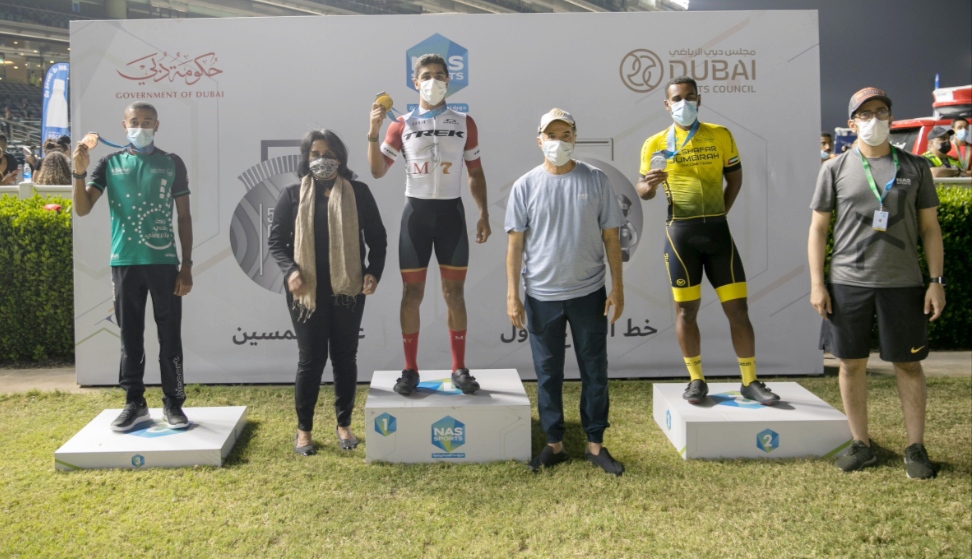 Dubai, April 30: Moroccans Othmane Safi and Soufiane Dardour continued their country’s domination of Dubai NAS Run with a one-two in the 5km Open race for men on Thursday night as curtains came down on the eighth season of the Dubai Nad Al Sheba Sports Tournament.

Saeed Hareb, Secretary General of Dubai Sports Council and Chairman of the Tournament Organising Committee, was present at Meydan on the night to honour the winners of NAS Run as well as the sponsors and strategic partners of this year’s Nad Al Sheba Sports Tournament.

Dubai Duty Free and Tecnotree were the main sponsors of this year’s Nad Al Sheba Sports Tournament, which is one of the biggest events of its kind in terms of participation and prize money. Salah Tahlak, Executive Vice President for Corporate Services, represented Dubai Duty Free at the closing ceremony, while Tecnotree was represented by its CEO, Padma Ravichander.

Dubai Police, Roads and Transport Authority of Dubai, Dubai Municipality, Dubai Corporation for Ambulance Services, Ministry of Health and Prevention, Dubai Sports TV, Meydan, Al Wasl Sports Club, UAE Cycling Federation, and Watani Al Emarat Foundation were the strategic partners of the Tournament, while Pocari Sweat, Aquafina, and AKI Fitness were support sponsors. Representatives from each of these entities were present at Meydan on Thursday and were honoured for their support in making the tournament a success.

Anouar El Ghouz had led a Moroccan 1-2-3 in the 10km Open run for men on Wednesday night, and 24 hours later Safi and Dardour reconfirmed Moroccan’s domination of the men’s Open race with Safi clocking a blazing time of 15 minutes and 12.64 seconds in the 5km Run. Dardour was second in 15:24.16, while Great Britain’s Lee Garrett took the bronze in 15:27.68.

In the 5km Open category race for women, Poland’s Emilia Skolubowicz blitzed through the course to finish with a time of 18:47.80, which was 66 seconds quicker than Australian Jasmine Grey’s silver-winning time of 19:53.18, while Slovenia’s Iveta Stryalova took third place in 20:19.35.

Besides the medals, the winners each of the four categories will receive AED 10,000, while the runners-up will take home AED 7,000 and the bronze-winners will get AED 5,000 each. There are cash prizes for those who finished between 4th to 9th as well, with each of them getting AED 3,000.

Organised by Dubai Sports Council, the NAS Sports Tournament has been one of the top sporting attractions during the Holy Month of Ramadan since 2013, and the eighth season of the Tournament was organized in compliance with all COVID-19 precautionary measures and protocols, as well as other guidelines issued by relevant authorities. The organisers conducted free COVID-19 PCR test for all NAS Cycling and NAS Run participants at Al Wasl Club – on April 20-21 for NAS Cycling and April 26-27 for NAS Run – to ensure the safety of everyone involved.

The Tournament, which attracted more than 2,500 athletes from different nationalities, kicked off on April 14 with the NAS Padel Championship, which saw unprecedented participation at the local level and, for the first time, featured an internationally-ranked International Pedal Federation (FIP) Stars tournament that attracted the world’s top professional players.

The 75km NAS Cycling Championship, then, took place across three nights, from April 22 to April 24, with hundreds of participants competing in six different categories for a total prize purse of AED 360,000.