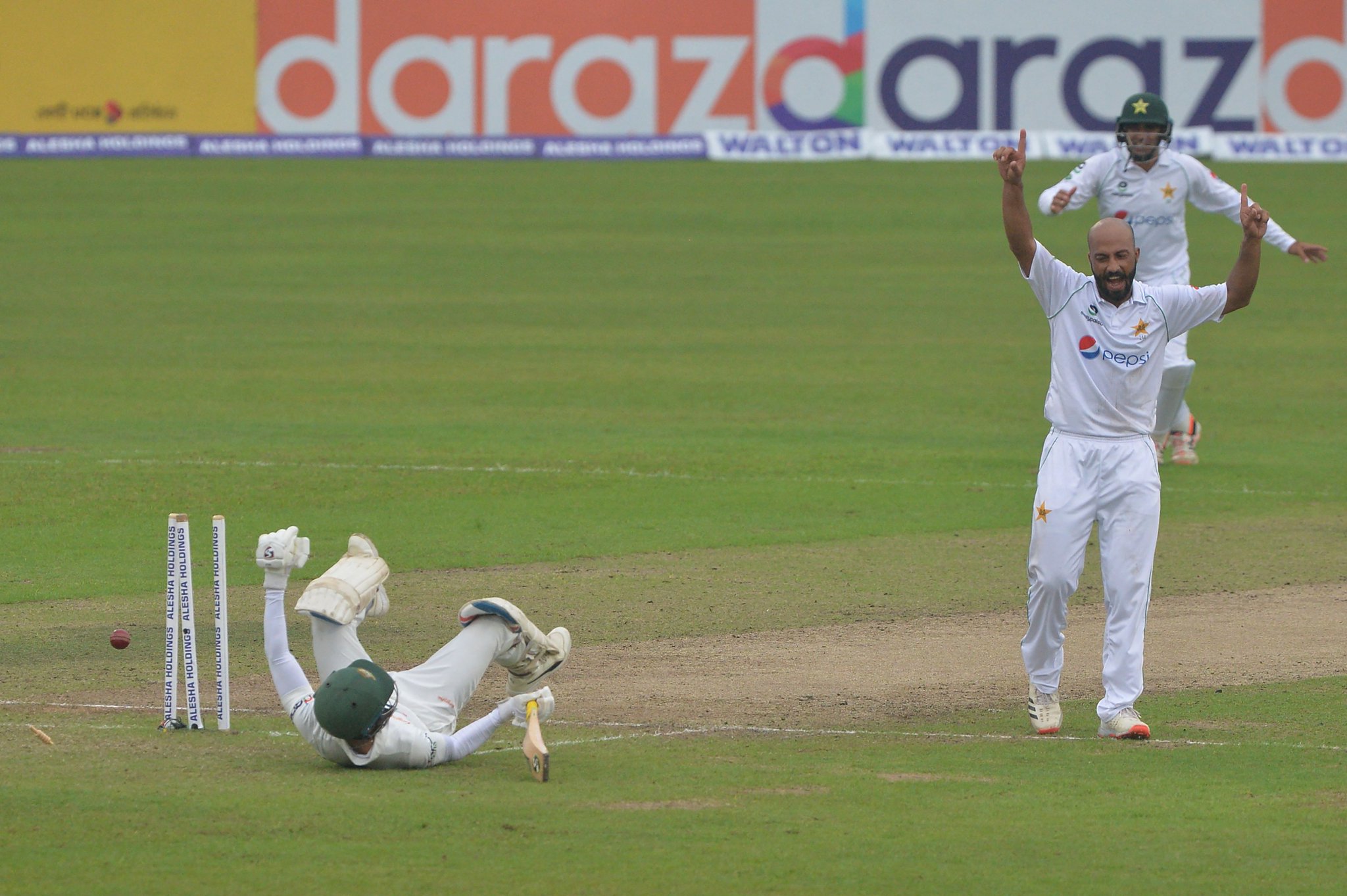 Dhaka, December 7: Sajid Khan ran through Bangladesh batting as hosts limped to 76/7 at stumps on the penultimate day of the second Test in Mirpur after Pakistan decided to declare at 300/4 in their first innings.

After rain played spoilsport on two consecutive days, the start of day four also got delayed due to light showers and a wet outfield. However, the match resumed after almost an hour and a half’s wait with Pakistan on 188/2; Babar Azam and Azhar Ali were on 71* and 52* respectively.

On the first ball he faced, Azhar struck a four, pulling it to the right of the square leg region. But two balls later, he threw away his wicket, getting caught behind after Ebadot Hossain induced a thick edge. Pakistan lost a set batter in the first over of the day as Azhar fell for 56.

Shortly after, Azam followed suit, falling for 76. He also struck one four before falling prey to Khaled Ahmed’s accurate delivery. A memorable scalp for the bowler, his maiden one in Test cricket. He kept the ball low, but the variable bounce did the trick as the reviews showed that it was hitting in front of the middle and leg stump.

Later, the two new batters – Fawad Alam and Mohammad Rizwan – combined for a steady stand and made sure there were not any more hiccups in the session. They batted with caution and kept the scoreboard ticking with regular boundaries. They took their side to Lunch at 242/4, with their stand worth 45 runs at the time.

The two batters kept finding the ropes after the break and soon got to their respective fifties before Azam decided to declare the innings at 300/4 in an attempt to force a result in the four sessions remaining.

One over into Bangladesh’s innings, Pakistan had to bring on their spinners due to the dwindling light in Mirpur. The forced move proved to work out well as Sajid Khan dismissed debutant Mahmudul Hasan Joy for a duck, who edged it to the safe hands of Azam at first slip.

Sajid picked up his second wicket as Bangladesh lost their other opener, Shadman Islam, to a soft dismissal. Done by extra bounce, Islam could only lob the awkward cut shot to Hasan Ali at point.

It went from bad to worse for the hosts when they lost their skipper Mominul Haque to a run-out. Trying to steal a quick single, Haque was short of his crease after Hasan Ali hit the stumps directly at the non-striker’s end as Bangladesh went into Tea at 22/3.

Sajid struck for the third time early in the third session. Mushfiqur Rahim went for a wild slog but failed to connect as the ball travelled only to short mid-wicket. In their bid to be aggressive, Bangladesh lost another, this time with Liton Das charging down the track and straight into the hands of Sajid Khan who completed a good reflex return catch.

Despite having lost half their side, Shakib Al Hasan and Najmul Hossain Shanto continued to show intent and lived dangerously. The pair smashed three boundaries in a space of seven deliveries before Sajid trapped Shanto to register his maiden Test five-for.

Mehidy Hasan Miraz was the seventh batter to make the long walk back, with Sajid cleaning him up for an eight-ball duck.

With the light fading, the umpires decided to call stumps early with Bangladesh at 76/7, still 25 runs away from avoiding follow-on.