Sarfaraz: The captain who brought the gold home

KARACHI: “Hey, it’s done. He has asked us to come at midnight tonight,” said my colleague this Saturday evening.

We had been trying for three days to get an interview with the man everyone in the country wants to meet since last Sunday, Sarfraz Ahmed. 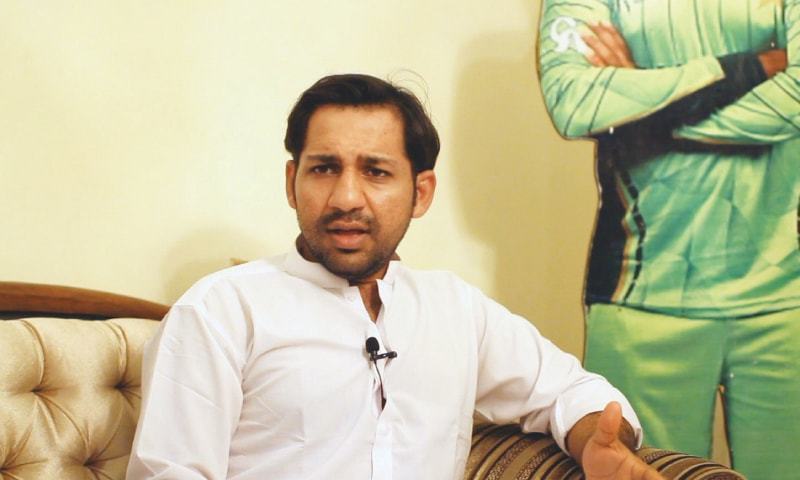 Finally, we were at his house in the narrow streets of Karachi’s Buffer Zone. It wasn’t difficult to find where the Pakistani captain lives; once we were in the vicinity, all we had to do was to ask a bystander. “Just keep going straight along the park and you will know,” was the reply.

As I walked inside the living room, I noticed everyone who was there — except for Sarfraz. My eyes fell upon him accidentally. Instead of being star-struck, I was taken aback by the fact that Sarfraz had no presence, nothing that made him stand out from everyone else, even though he was sitting right in the middle of the room. No allure, no nothing, almost unremarkable.

Sarfraz doesn’t have the star power and the glamour that former Pakistani captains like Imran Khan and Wasim Akram have — but he doesn’t need to. Sarfraz is different. He is very much your neighbourhood — mohallay ka — cricketer as far as his persona goes.

Maybe, having a down-to-earth and self-effacing captain is what the national team needed to rise up from the doldrums it found itself in when Sarfraz was made skipper. Maybe, it was the time when he was practically discarded from the side that taught him lessons in humility and perseverance.

His track record suggests that he is more than aware of giving a chance to players who have potential so that precious talent isn’t wasted — something that might have easily happened to him.

He was quick to dismiss any suggestion that he deserved credit for injecting young blood into the squad and wielding an aggressive playing style. “Credit goes to my boys,” as the refrain goes.

Pakistan entered this year’s Champions Trophy with virtually no chance of winning. But listening to Sarfraz, it seems that all the negativity was just media-talk.

“When we arrived in England, our target was to win the tournament,” he insisted. When asked if he genuinely thought that the team had what it takes to win, Sarfraz was unflinching: “We had belief and faith.”

Pakistan got off to the worst possible start, losing badly to India in the opening match. The captain admitted that mistakes were made and that he “also made some errors.” But what’s most striking about Sarfraz is his eternal optimism. Let not his humble persona fool you; the 30 year-old has steely determination.

His tenacity appears to have been useful after the setback against India. “We learnt from our mistakes and moved forward,” he said of the Indian defeat. Just like he stayed patient in his career and grabbed the opportunities when they came his way, he told his team after that first match, “what happened, happened. We still have two games remaining and we still have a chance”.

The team got together after the India game and had some “strong pep talks”, Sarfraz told me. “We didn’t go too much into the technical stuff. Though we had some brave decision to make such as dropping Ahmed Shehzad, we focused mostly on our basics. We were positive and so we got the results,” he said.

The semi-final against England “gave us the feeling that we can with the Champions Trophy,” he told. “The way we made a comeback in the tournament meant that we didn’t feel the pressure against India in the final.”

There were moments in that match that showed how crucial it was to stay upbeat and trust the team. “I didn’t worry too much when Kohli’s catch was dropped. The way Amir was bowling, we knew he’d be gone soon,” he said.

It’s been repeated to the point of cliché, but Pakistan didn’t have an obvious X factor that’s apparently required to win a major tournament. “You’re right, we didn’t have any big names in the team but we had young players — and the young players were the X factor,” retorted Sarfraz, sticking to his erstwhile habit of believing in the youth.

And believe in the youth he did when he had no hesitation in yielding to the 18-year-old Shadab’s demand that the umpire’s decision in favour of Yuvraj Singh be reviewed. “He was confident and you have the result to see for yourself. I trusted him,” he said.

Going forward, Sarfraz said that Pakistan will stick to promoting young talent. He admitted that Pakistan is “behind modern cricket”, but seemed confident that the national team will make up the ground.

The Pakistan Super League, he said, is important to the team’s development. Sarfraz said that he learnt immensely from Sir Vivian Richards, the mentor of Quetta Gladiators, the team that Sarfraz captains. “I learnt to be fearless,” he said.

If the team, led by a brotherly Sarfraz who takes great pride in his young players, performs without inhibition, it would be worth keeping an eye on what the team goes on to achieve.