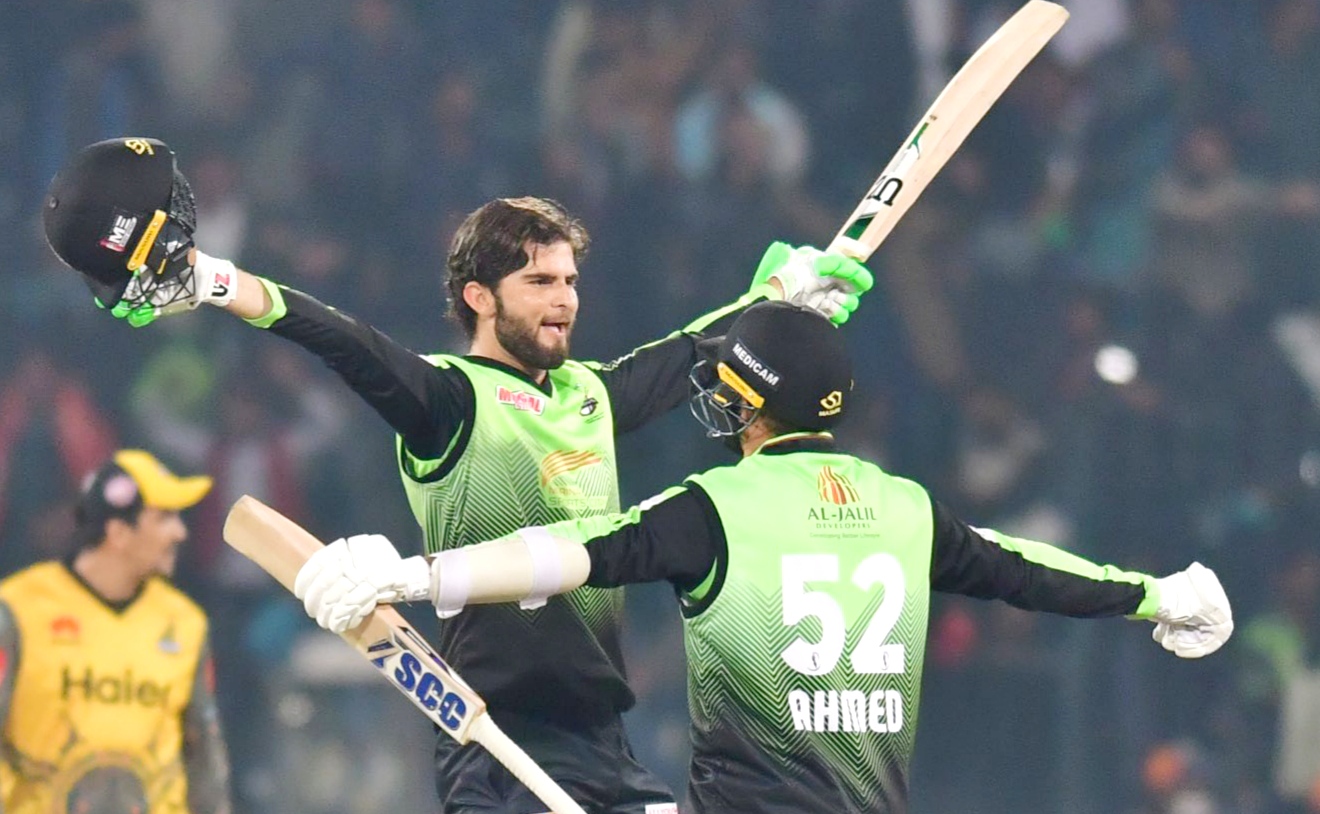 Lahore, Feb 22: Lahore Qalandars captain Shaheen Shah Afridi (Shaheen Afridi) produced a sensational burst with the bat to score 22 runs in the final over bowled by Mohammad Umar including three sixes and one four to tie the 30th and last group stage HBL Pakistan Super League 7 match against Peshawar Zalmi in front of a heaving Gaddafi Stadium, Lahore on Monday night.

However, Qalandars lost the Super Over as Zalmi comfortably chased down the six-run target with Shoaib Malik hitting the first two balls bowled by Shaheen for boundaries.

Earlier, it was a brilliant Super Over by Zalmi captain Wahab Riaz in which he conceded a mere five runs against Fakhar Zaman and Harry Book to ensure his batters don’t have a big ask in the one-over chase.

In the final over of the match, after two big strikes and a four from Shaheen, it came down to seven off the last ball after Umar had managed two successive dot balls. Shaheen smashed the ball over the mid-wicket fence for a massive six to the sheer joy of a packed GSL.

Despite the defeat, Qalandars finished second behind defending champions Multan Sultans with 12 points from 10 games, Zalmi also finished with 12 points but an inferior net run-rate pushed them to the third spot.

Qalandars have made their best-ever finish in an HBL PSL group stage and now have the cushion of an extra game in the playoffs. Qalandars kick-off the playoffs with a mouth-watering Qualifiers clash with the Sultans on Wednesday.

On Sunday night, Qalandars floundered in their 159-run chase before Shaheen’s heroics. Zalmi’s veteran all-rounder Malik dismissed the leading run-getter of the ongoing season Fakhar for a first-ball duck.

Phil Salt (14) and Kamran Ghulam (25) added 37 for the second-wicket. However, both fell in quick succession as Qalandars stuttered to 51 for three inside six overs. Last match’s centurion Brook fell for two.

The seasoned Mohammad Hafeez kept the fight on for the Qalandars with 49 off 44 (three fours, one six), the match had seemingly went out of Qalandars reach when Hafeez was sent packing by Wahab on the first ball of the penultimate over.

Batting first Zalmi scored 158 for seven in their allotted 20 overs. Zalmi got off to a sluggish start losing the wickets of their in-form opener Mohammad Haris (6) and Hazratullah Zazai (20) in 5.1 overs. Kamran Akmal who returned to the side fell for 18.

Malik continued his good run with a 32-run contribution (28 balls, one four, one six). Malik has now taken his runs tally in the HBL PSL 7 to 346 in 10 innings at 43.25, he is fourth in the tournament’s batting charts.

Malik and Haider Ali (25 off 22, two fours, one six) stabilised the innings with a 60-run stand for the fourth-wicket. Khalid Usman who was making his first appearance of the season scored an unbeaten 19 off 11 to ensure a competitive total for Zalmi.

Leg-spinner Fawad Ahmed who has been induced in the Qalandars squad to replace the prolific Rashid Khan (unavailable due to international commitments) took two wickets for 26 in four overs.

“There was pressure on me in the Super Over, I am happy that I was able to deliver for the team. Hats off to Shaheen that he scored those runs in the final over, Umar is a youngster and a bit inexperienced and took some pressure but he will learn from this. Mohammad Haris has made a real difference to the side with the gloves, bat or fielding. In Super Over we needed a batter who could get us singles and Shoaib Malik and Haris were the best combination with the bat for us in the situation,” player of the match Wahab Riaz said.